Middle school students are introduced to Charles Dickens usually through only one of his novels—“A Tale of Two Cities”—perhaps because that’s his most accessible and bloody work. While Dickens wrote about Paris and London, he is most familiar with England’s capital and with Manchester, two cities that produced his plays. He would have been a happier man, though, if he had moved to Paris, gay Paree as opposed to the rigidly strait-laced Victorian digs. Why so? As Ralph Fiennes film “The Invisible Woman” brings out, Dickens, unhappy in his marriage, is pursuing an affair with a lass some twenty-five years his junior. In a friendlier country not afflicted with the repressions of the scepter’d isle (as Shakespeare called his land), he would have been able to secure a divorce from the woman who bore him ten children, freeing him to take up the rest of his life with the lively, intelligent Nelly Ternan, who—unlike the pudgy Catherine Dickens–could appreciate his novels and plays.

In a picture that could best be described as Masterpiece Theater, the sorts of frames that could have been turned out by the Merchant/Ivory machine, director Fiennes stars as the Great Author during the 1880’s. Scripted by Abi Morgan from Claire Tomalin’s book “The Invisible Woman,” this tastefully mounted film whose only melodramatic flourish occurs during the derailment of a train, centers on the emotional and erotic connection of Dickens (Ralph Fiennes) with the 18-year-old actress Nelly Ternan (Felicity Jones). Nelly is slim, attractive and intelligent, in every way the person who serves as an antidote to Dickens’s wife Catherine (Joanna Scanlan). Given the times, however, their relationship must remain hidden lest a national scandal spoil Charles’s reputation.

Dickens, unlike so many other artists of the book, the canvas and the musical note, is lauded by all, made prosperous despite his background in poverty, determined to pursue the object of his lust. All this serves as background to a sad scene that opens the film before flashbacks, one showing a black-costumed Nelly walking across a beach as though she were a ghost, an invisible woman as it were. One can but think highly of the advice given to Dickens by Nelly’s mother, Mrs. Ternan (Kristin Scott Thomas), urging the author to watch his step with the eighteen-year-old while at the same time encouraging their liaison since a marriage to Dickens would advance the young woman’s status. Nonetheless it becomes clear to everyone with 20/20 vision that the meetings between Charles and Nelly, seemingly accidental, have been scripted by the couple. Nor is Charles’s wife—who in one scene covers her body quickly when her husband enters the room unexpectedly—out of the loop. Though we never see her in a “we’ve got to talk” moment, her body language indicates a thorough understanding of the situation.

One scene that stands out shows workmen dividing the Dickens home in half, boarding up the place by adding an additional wall to allow Charles a complete physical separate from the Mrs. In another, we see the advantages that accrue from marrying a younger man as Nelly, in real life, does after Dickens’s death. The twenty-three year old husband is in bed with his thirty-something wife (she pretends to be much younger), enjoying a peak orgasm. This contrasts with her affectionate but non-orgasmic night with Charles. All remain full dressed. Just what sort of weirdo was this Queen Victoria?

The film will be appreciated by Merchant-Ivory fans, while others will find the episodes not only slow movie but hushed, as though everyone is in the waiting room of a doctor’s office afraid to be scandalized and considered a boor. Felicity Jones, twenty-nine years old when the movie is filmed, should be ready for some more juicy roles. Whatever you may think of the emotions on display, you will appreciate the authenticity with which the film portrays the times, when oil lamps took the place of electrical fixtures and the quill pen is needed to knock out thick novels and theater pieces. 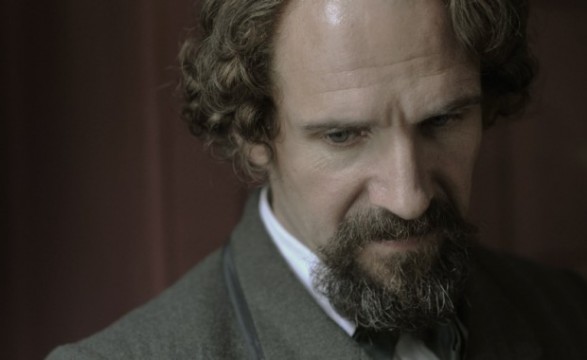