Writer-director Zach Clark’s “White Reindeer” is a curious and frustrating film. Anchored by a compelling lead performance from Anna Margaret Hollyman, and tossing off little riffs of dry wit and allegory here and there, it’s a very particular and peculiar indie offering. Unfortunately, its originality is undone by false-note narrative beats and a muddled if not outright phony moral theme or purpose, resulting in a work that is definitely distinctive yet far from singular.

Set in present-day suburban Virginia, the film centers around Suzanne Barrington (Hollyman), a real estate agent who enjoys a nice life with her meteorologist husband, Jeff (Nathan Williams). Post-Thanksgiving, she’s just closed on a house sale to new neighbors Patti (Lydia Johnson) and George (Joe Swanberg), a pair of chipper swingers; and Jeff has announced that he received a job offer which will take them to Hawaii in the new year. Suzanne is thrilled, but her plans for a wonderful holiday are destroyed when Jeff is killed in a robbery gone wrong.

Almost immediately after his death, Suzanne discovers that even though she and Jeff had been together since college, she didn’t fully know him. A mutual friend of theirs breaks down and reveals Jeff’s extramarital fling with a stripper, Fantasia (Laura Lemar-Goldsborough). Sinking into a bowl of depression while racking up $5,000 in online shopping charges, Suzanne also surfs through Jeff’s Internet browsing history. Emotionally adrift, Suzanne seeks out Fantasia, and the two form an unlikely attachment that includes doing blow and shoplifting. Later, Suzanne curiously checks out her aforementioned neighbors’ lifestyle.

With its deadened affect, “White Reindeer” has scattered moments of pin-prick dark comedy (arriving for Jeff’s wake, a friend says, “He was a treasure… a local treasure”). But Clark’s film is not a black comedy, per se. It’s worth noting that Jeff didn’t die of a heart attack, or in a car accident — that he was murdered, and Suzanne discovered the grisly crime scene. It merits stressing this again because “White Reindeer” is basically not truthful about the way other characters treat Suzanne in the wake of this act. In fact, several characters exist to seemingly only further emotionally dump on Suzanne (her parents announce that they’re separating, her brother shows up with an enthusiastic greeting).

“I just feel like I was in love with this made-up person,” says a distressed Suzanne at one point — except the movie doesn’t convincingly evidence and illuminate this thought process or interior struggle. It’s fine and great that the movie doesn’t kowtow to more expressive conventionality, but there isn’t a sincere arc of stumbling and fumbling that viewers can attach to because there aren’t outside characters attempting to regulate Suzanne’s mental health and well being. She’s adrift and free to make arbitrary stabs at self-medication, but the entire film seems to exist in a snow globe of precious, emotionally stunted quirk.

The acting is quite solid — Hollyman exudes a measured watchability throughout, and Lemar-Goldsborough does some good things with an underwritten character — but Clark’s workaday direction is problematic, and often seems at odds with the material as written. There are fleeting moments that have a dry or wounded-dove hold, but the flat and unimaginative stagings don’t much help the argument that “White Reindeer” is in any way an artful metaphor. 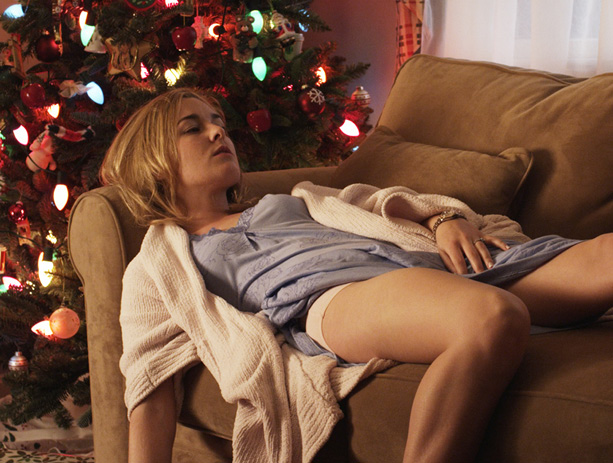