Tales of infidelity make for easy drama on a quite general level, but when one of the parties involved is a huge celebrity, it tends to amplify the intrigue. Such is the case with “The Invisible Woman,” multi-hyphenate Ralph Fiennes’ second directorial effort, and the story of author Charles Dickens and his mistress, Ellen “Nelly” Ternan (Felicity Jones). Adapted from a meticulously researched 1991 book by Claire Tomalin, the film chronicles Dickens’ willful dissolution of his marriage to wife Catherine (Joanna Scanlan), the mother of his 10 children, even in the face of the impossibility of a public relationship with Nelly. For ShockYa, Brent Simon had a chance recently to speak one-on-one with Scanlan, about the film, her television writing career and one of the year’s most jaw-dropping big screen confrontations. The conversation is excerpted below:

ShockYa: The film is titled “The Invisible Woman,” but watching it it occurred to me that it could be pluralized, because while I suppose it’s meant as a nod to Ellen’s story, Catherine is also very much invisible in a way — having to live in the shadow of her husband’s fame.

Joanna Scanlan: I think the book is the source of this, really. Claire Tomalin, who wrote the book, did some extraordinary when she published it in the 1980s — she uncovered a story about something that nobody had heard much more than whispers about the previous hundred and twenty-odd years. She did a lot of extremely clever detective work to tell the story of Ellen Ternan, and I think she was doing that as an fact of uncovering one woman’s history but standing in for all women, if you see what I mean. So many women have been unseen and unheard during history — especially the women around great men. So I think “The Invisible Woman” stands for all women, and in looking at the particular life of Nelly and discovering something extraordinary there, in the process, Catherine is overlooked in some ways. Her story is not told in this film; there’s another level of invisibility in the film. But I think emotionally, for me, and as an actress, I felt the [invisibility] of my character was really about my emotions being hidden to my husband. My husband did not see — I was invisible to him, really. He needed to do what he needed to do to escape our marriage and start a new love affair, and so all the things Catherine felt were invisible to him.

ShockYa: Your answer may be informed by having read the book, which I have not, but I’d be interested in your perspective in what seem to be several acts of if not outright cruelty then at least extreme callousness — there’s the public statement that Dickens makes regarding the dissolution of their union, for instance. And in reading a little bit about their lives subsequent to their separation, I was surprised to learn that Catherine seemed to remain incredibly devoted to him, and didn’t go to extreme measures to speak out publicly against him. Was there a sincere love between the two of them at one time that kept her tethered to him, in a manner of speaking, or was that more informed by societal pressures of the time?

JS: I think that Catherine did love Charles. I’m not sure that they were necessarily a great match. And very early on in their marriage he’d already half-fallen in love with her sister. Then that sister died, and for the rest of his life he more or less lived with her other sister. So I don’t think they were a great match, I don’t think it was a two-way street. By the time we meet them (in the movie), she’s had 10 children by him, one of which has died. I think she was very affected by that, and she’d probably spent most of her adult life pregnant and had lost all sense of herself and of the relationship with her husband by that point. She was almost like a farm cow by that point —  a breeding machine. They clearly had a great sex life on some level, otherwise they wouldn’t have had the 10 children. She was clearly very fertile. But I think the sensibilities between them had been very lost by the point we meet them in this story.

ShockYa: One of the film’s centerpiece scenes — probably the scene that anyone who sees the movie will leave talking about — occurs when Catherine accepts a directive to go to her husband’s lover to give Nelly a bracelet mistakenly delivered to her. That’s such a gut-punch, and yet by all accounts it really happened. That scene was jaw-dropping and heartbreaking in equal measure. What material most informed that scene for you, be it from the book or discussions and preparation with Ralph and Felicity?

JS: I think that moment, when she goes to take the bracelet to Nelly, shows enormous courage in her — she’s prepared to face the truth. She knows that something has been going on at that point, as she did in real life, and Charles, even though he was quite moody and difficult, I don’t think would have coerced her into it (if she had refused), but he would have demanded it of her. I think she was very brave… and there was probably an element of curiosity as well — “Who is this girl, and is it real? Is this young girl capable of loving my husband?” I think one of the concerns that Catherine has is that Nelly is not going to be able to love Charles. She’s going to lose him, but I think there’s really an element of altruism in it — she wants to make sure that he’s in the hands of a good woman. I think that’s one of the things that happens in the scene — that they recognize in each other a certain emotional honesty. And I think Catherine almost is prepared to hand Charles over, having met Nelly. I think she feels oddly protective of Nelly — she doesn’t want her to get sucked into something that she can’t handle, because she is such a young girl. I think she has a bit of a maternal feeling for her. So I think the reason she went is to face the truth, because she’s a brave woman. And I think when she got there she found more than she bargained for, and was able to not necessarily let him go in that moment, but recognize that there was something quite serious going on (between Charles and Nelly).

ShockYa: There are some interesting parallels and contrasts to another big screen confrontation between wife and mistress this year, in “American Hustle,” where Amy Adams and Jennifer Lawrence’s characters meet, in a bathroom. … The characters are aware of one another’s existence, but finally come together and have words. It’s much more toxic, but similarly the film doesn’t make that the end-all, be-all of the women’s relationships.

JS: I think there’s a huge difference between something like that happening today and something like that then, because in 1864 or whatever year it was I think Catherine could not have expected for a moment that she would be divorced. Divorce was an extraordinary thing to do. What Charles does is something she couldn’t have possibly imagined, and then she’s consigned to a most awful life after that. But today, the end of a marriage can be devastating, but there’s still an opportunity every woman has in her mid-40s to be able to pick herself up and start all over again in a way that Catherine just does not have. I think that’s a massive distinction between contemporary women’s lives and women’s situations legally and socially in 19th century Britain. That’s an injustice, I feel, that I’m glad we no longer live with.

ShockYa: I’m familiar you mainly through your film work — “Notes on a Scandal,” “Girl With a Pearl Earring,” “In the Loop” and the like — but you have a lot of TV experience as a writer-performer. … Is that type of work more satisfying, or just exercising a different creative muscle — crafting a character over time versus saying, “Okay, I’m here to just play this character in service of a larger but fixed story”?

JS: They’re two very distinctive roles in my head. I like both of them, but they are very different. When writing for a character over a long period of time — sitting in the room writing it and then going out and playing it — is something that feels hugely instinctive, actually. You’re just following something that’s inside — a feeling of “let’s go there.” You sort of have to trust that that’s going to work out. Whereas I feel with just acting and coming into a film you’re just very much in other people’s hands. I feel Ralph Fiennes is an extraordinarily good director with actors — I feel like I could entirely trust him and then more or less just try to do what he told me to do. And then of course the next level or layer is that a lot of the performance in those films is made in the editing, because he’s choosing the takes and the ordering of the scenes. When you’re writing for yourself and playing it for yourself, you have more control over the end product and meaning. I’m very happy with both, but the truth is, whichever one I’m doing I’d rather be doing the other one. (laughs) You’ll catch me moaning, whatever day of the week it is. It’s a classic sort of double-bind, but it works.

NOTE: “The Invisible Woman” is now playing in New York City and Los Angeles, and opens wider in January, 2014. For more information on the film and its playdates, visit www.SonyPicturesClassics.com/TheInvisibleWoman. 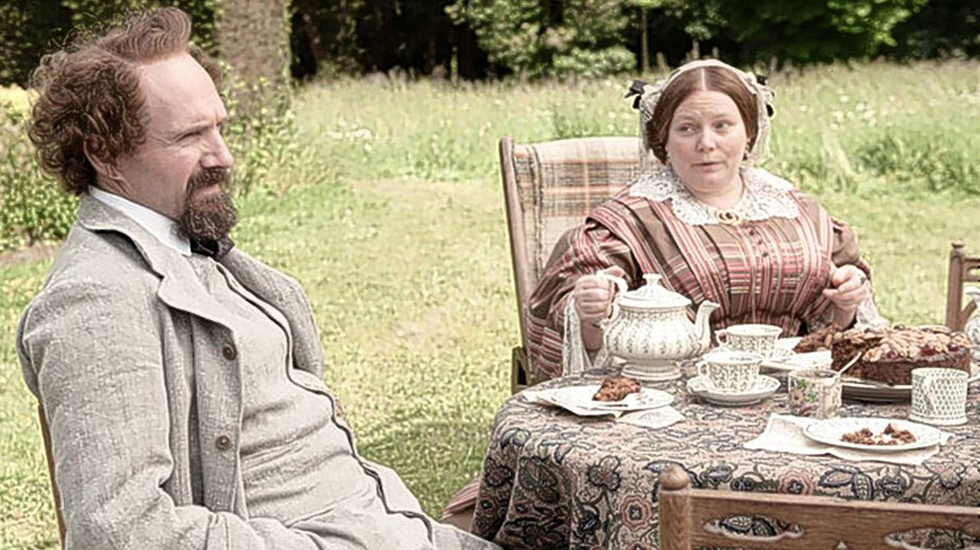