Title: The Wolf of Wall Street

“The Wolf of Wall Street” lets you relish in unparalleled no holds barred debauchery while increasingly disillusioning the fun and games with the nasty reality of the situation along the way.

The film is based on the true story of Jordan Belfort (Leonardo DiCaprio), a guy who kicked off his career on Wall Street with the best intentions, but threw all of his morals out the window in exchange for money, women and drugs. Jordan founded Stratton Oakmont and reveled in the lucrative business of selling fraudulent stocks at his costumers’ expense, but there was just so long he could carry on making scenes, crashing cars and drowning himself in Quaaludes before the FBI caught on.

Having read the real Belfort’s memoir, I walked into Martin Scorsese’s feature adaptation knowing what the character is capable of, but apparently I wasn’t capable of imagining the true extent of Belfort’s antics while reading the book because on screen, the behavior is above and beyond. There’s no reason to like the guy. He cheats on his wives, robs innocent people of their hard-earned money and is absolutely wasted the large majority of the movie, but at the same time, it’s so easy to understand why he gets away with it for so long. He’s a total charmer and an absolute blast to hang out with.

There isn’t much of a character arc here. Jordan starts off looking to build an honest career, is swayed by the appeal of making enormous sums of money and then that’s it. He gives off the impression that he’s loyal to his friends, company and his family, but when troubled times come, he’ll sell them all out to save his own skin – or to save his precious Quaaludes from drowning. This shouldn’t work for a full feature, let alone a full feature with a three-hour running time, but it does because DiCaprio’s performance as Belfort is infectious. Everything he does is so wrong, but it feels so right and that’s largely because DiCaprio doesn’t go big for the sake of going big. Every single thing Jordan does in this movie, whether it’s selling a stock or delivering an in-office pep talk, requires an incredible amount of thought and energy.

“The Wolf of Wall Street” essentially has DiCaprio doing the same exact things over and over again – rev his employees up, take Quaaludes, have sex, consult his right-hand men, take Quaaludes, wash, rinse and repeat. However, it never grows old because screenwriter Terence Winter never lets it. Jordan is forever driven by the need to go bigger and be the best, and Winter infuses that drive into every element of the character’s life, turning him into someone who feels consistent, but also wildly unpredictable because his stunts are so big to begin with, you can’t even imagine where he’ll take them next.

Winter also has a knack for writing highly memorable moments. “Wolf of Wall Street” is a thrill overall, but it’s also an experience that’ll leave you scrambling to pinpoint a favorite scene because there are so many to choose from. Thanks to the trailer, whether you’ve seen the film or not, you know DiCaprio’s meal with Matthew McConaughey is downright bizarre yet oddly charming. There’s also a great interaction between Jonah Hill’s Donnie Azoff and Jon Bernthal’s Brad. Without spoiling the details, Donnie is Jordan’s #2 and Brad is the tough guy of the bunch. The two have a tendency to irk one another and Donnie quite enjoys pushing Brad’s buttons. The pinnacle of “The Wolf of Wall Street,” however, is a scene involving a Lemmons overdose, an especially potent breed of Quaaludes. This isn’t just DiCaprio playing high; it’s a disturbing, hilarious and unprecedented physical display that will put your own most inebriated moment to shame.

DiCaprio steals this show, as he should, but there are a number of supporting performances worth highlighting. Hill is a standout as Donnie. He’s like Jordan Belfort Jr., strutting around with those oversized pearly whites and filling the role of the ultimate sidekick, but one with his own, unique bite. Kyle Chandler is solid as Agent Patrick Denham, but the character isn’t as wow-worthy as the rest because he isn’t as crazy as the rest. However, do keep an eye out for some stellar verbal sparring between Denham and Belfort about halfway through. Cristin Milioti also deserves a great deal of credit for her work as Teresa Petrillo, Jordan’s first wife. Again, Jordan doesn’t have much of an arc, but he does make one drastic transition at the start of the film and Teresa is vital to ensuring that change hits home. Whereas Margot Robbie’s Naomi, Jordan’s second wife, deals with his antics by fighting back, Teresa can’t because that was never an issue in their relationship prior to his gig on Wall Street. She genuinely emotes, so the large majority of the film’s honest heart comes from her performance.

But of course all of this begs the question, what’s a movie without a character journey and heart? There’s really no classifying “Wolf of Wall Street” according to traditional filmmaking standards. On the one hand, it’s an experience. Scorsese is giving you the chance to escape your reality for three hours to live it up. Sounds like a nice getaway, right? It is, but it’s a getaway you feel guilty having. Imagine snatching a winning lottery ticket out of someone’s pocket and cashing it in. You’ve got the goods, but you’ll forever have a pit in your stomach knowing where it came from and that’s how “Wolf” winds up being a worthy appalling romp. You get to ride and enjoy the highs, but with the understanding that it’s all totally wrong. 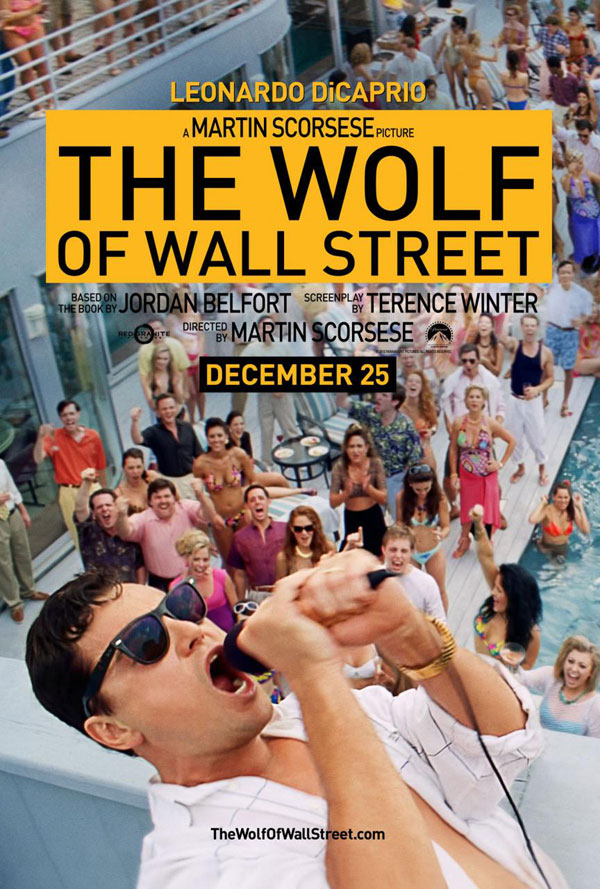