Special Features: The Making of Run

Mike (Adrian Pasdar) and his son Daniel (William Moseley) have been on the run from the mob for over 16 years; Daniel using his parkour skills to pull off robberies in order for them to survive. After the two move back to New York in order for Mike to make peace with his past, Daniel makes friends who are also parkour enthusiasts which helps him decide to leave his crime life behind. However Mike’s troubles will not allow his son to give up his natural talent so easily.

The good: Parkour is exciting and badass to watch.  The acting isn’t bad by all, but it can get out there at times. What’s up with Eric Roberts? He’s turning into what John Voight was in the late 90’s, and by that I mean the dude is in everything.  I do like Roberts as a villain though. He has honed his evil creep persona.

The bad: Run reminds me of those teen/young adult movies where they write a plot around a fad – films like Breakin’, Breakin’ 2: Electric Boogaloo, Rad, The Last Dragon,  Thrashin’, The Forbidden Dance, Lambada, Gleaming the Cube, Grind and of course the Step Up pentalogy and their knock-offs. Usually when someone gets the bright idea of making a new one, it fails miserably because the storyline is ridiculous and the acting sucks; but for some reason we loved them anyway because we didn’t know any better. The love interest was pretty cheesy. A girl who secretly loves to do parkour…what year is this? Why is that such a big deal? I don’t however buy that she’s a gorgeous seemingly flawless girl who is into parkour. The way Kelsey Chow portrays her as clumsy, she would’ve had a busted face by now. When they showed her with a wrapped arm, I thought maybe the writer or someone came up with the idea of making her a cutter. Some of the dialogue seems like it was ripped straight from some emo kid’s angsty Tumblr page. The scene where the parkour enthusiast teenagers bring Daniel to their secret training lair was hokey. They try to introduce him to Bruce Lee’s “Be like water” quote/philosophy and it turns into some cliche zen moment of clarity for the characters, with the flute music and the interpretive dance/parkour acrobatics, which is a total eye-roller cheese-fest  Just shut up you monkeys and do some jumps.

I thought this Run was going to be terrible, but because of the nostalgia trigger, I found an appreciation for the effort. It’s not brilliant by any means, but it’s fun. 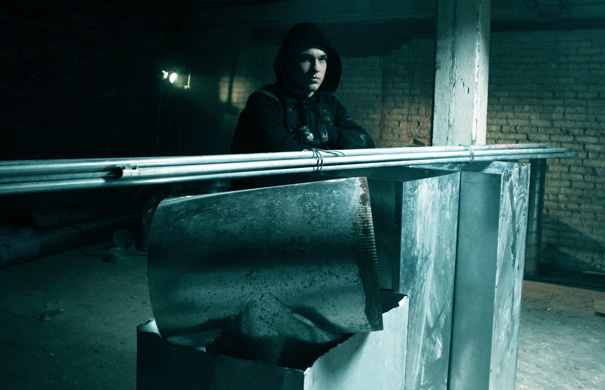