Need for Speed Has a Super Car Showcase in New Featurette

The high-speed cars that are set to rev up the action in the upcoming film, ‘Need for Speed,’ are being introduced in “Super Car Showcase,” the third installment of the Behind-The-Scenes Featurettes series from the anticipated crime drama. The movie’s studio, DreamWorks Pictures, has distributed the clip, which offers additional insight into the cars featured in the movie adaptation of the popular series of video games of the same name by Electronic Arts.

‘Need for Speed,’ which is set to be released in theaters on March 14, 2014, was directed by ‘Act of Valor’ helmer Scott Waugh. The adaptation, which was written by George Gatins, stars Aaron Paul, Dominic Cooper, Imogen Poots, Ramon Rodriguez, Rami Malek, Scott Mescudi, Dakota Johnson, Harrison Gilbertson and Michael Keaton.

The following synopsis for ‘Need for Speed,’ which is being distributed by Walt Disney Studios Motion Pictures, has been released:

The film centers around Tobey Marshall (Aaron Paul), a blue-collar mechanic who races muscle cars on the side in an unsanctioned street-racing circuit. Struggling to keep his family-owned garage afloat, he reluctantly partners with the wealthy and arrogant ex-NASCAR driver Dino Brewster (Dominic Cooper). But just as a major sale to car broker Julia Maddon (Imogen Poots) looks like it will save Tobey’s shop, a disastrous race allows Dino to frame Tobey for a crime he didn’t commit, and sending Tobey to prison while Dino expands his business out West.

For more information on ‘Need for Speed,’ visit the film’s official website and Facebook page. Check out the “Super Car Showcase” featurette and photos below. 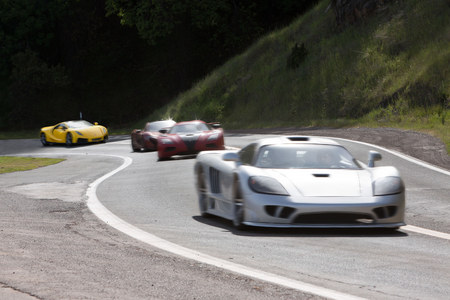