Exclusive: ShockYa Visits the Set of Burying the Ex

Zombies are seemingly everywhere. In addition to anchoring one of the country’s most popular television series in “The Walking Dead,” in just the last 14 months they’ve done big-screen battle with British East-Enders in “Cockneys vs. Zombies,” served as the backdrop for a funky tale of blossoming young love in “Warm Bodies,” been given the John Hughes treatment in “Detention of the Dead,” worked their way into a hijacked indie film production in “Zombie Hamlet,” and chased Brad Pitt to the highest theatrical receipts of his career in the form of “World War Z.”

It’s only fitting, then, that they also inspire a tale of obsessive twentysomething romance taken too far. After all, what are zombies if not the perfect metaphor for that lurking, ever-present ex-significant other who will just… not… leave… you… alone? “Burying the Ex,” scripted by Alan Trezza and directed by Joe Dante, is that tale. The movie centers on Max (Anton Yelchin), whose ex-girlfriend Evelyn (Ashley Greene) dies and then becomes reanimated. Along with the attendant desire for human flesh, though, she also wants to get back together — idealizing their relationship and taking her zombified state as little more than a sign that their love is meant to be, as Outkast would say, forever-ever. Understandably, this complicates things for Max, with both his new girlfriend Olivia (Alexandra Daddario) and just his life in general.

Trezza shot a short film with the same title and subject matter years ago, and then fleshed it out into a feature-length script. On set — where Dante is rather famously collaborative with his writers — he’s friendly and relaxed. Any frazzled nerves from handing over his baby to the silver-maned “Gremlins” and “Innerspace” veteran have been salved by a cast and crew who seem allergic to needless drama. I visit on a balmy December day that represents part of the home stretch of this independent production’s 20-odd day principal photography schedule, tucked away in a small studio just off a Los Angeles freeway.

Trezza is the most accessible and free, understandably, but having visited dozens of film sets, large and small, I can definitively state that it’s only the more untroubled ones — where the collaborators are all on the same page creatively, and the filmmakers are comfortable with what they’re getting — which feature such a lenient attitude with journalistic interlopers. A unit publicist arranges for stolen chats with the actors during some of their downtime, but there’s little babysitting and I’m otherwise free to wander about, mulling over the chronological deployment of various props laid out on a discrete, partitioned part of the warehouse floor. It’s like a mental-game hybrid of Tetris and Clue, piecing these items into the grander scheme of the film’s overall narrative, based on conversations with Trezza and others.

The schedule for the day is an interior shoot, with no fewer than four set-ups. I watch the run-through and filming of a scene involving a surprising discovery — with Dante making a few small tweaks, both technical and performance-based. While subsequent takes vary a bit, they’re all of a piece, tonally, and it’s obvious that Dante has a firm grasp of this moment’s delicacy and its flow into the movie’s more charged next sequence.

I smile in silent appreciation at some of the small ways that smarter big-screen Hollywood satires have captured the disparate off-screen characters that populate a film set and come together in pursuit of a common goal (a good movie). In between takes, I also chat a bit with producer Kyle Tekiela, who’s in the process of sifting through a massive batch of on-set photos, and deciding which ones are suitable for pre-release publication. While it doesn’t give anything away to note that in a zombie movie the odds are more than great that there will be blood, the producers understandably want to safeguard who might be felled, as well as the particulars of Greene’s make-up design.

Speaking of which, the first 45 minutes of shooting features Greene with her back to the camera, so first meeting her on set is a bit of a jarring experience — and not only because she’s wearing pajamas and a (precautionary) knee brace. When I tell her that she looks perfectly hideous, she accepts the compliment in its intended spirit, as Evelyn is indeed rendered, by special make-up effects designer Gary Tunnicliffe, in a manner that’s balanced perfectly somewhere around the halfway point between classical horror movie zombie and more a colorful, representational take on the decaying creatures. As a purely physical look it’s striking, and it’s just the sort of thing that whets one’s appetite for seeing how the rest of “Burying the Ex” turns out. 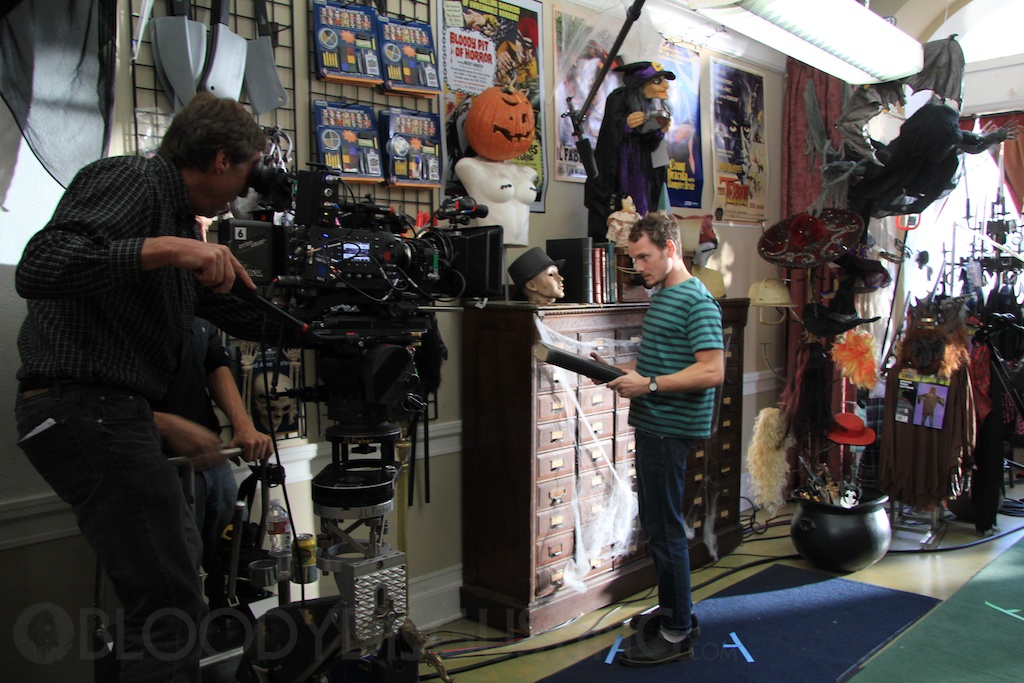