The upcoming horror-thriller, ‘Oculus,’ is preparing audiences to #SeeYourEvil with a new teaser trailer. The trailer for Relativity Media’s new movie, which first premiered at the 2013 Toronto International Film Festival, is showing how evil can tear families apart.

‘Oculus,’ which is set to be released on April 11, was directed by Mike Flanagan. The helmer co-wrote the film’s script with Jeff Howard, and his based on the filmmaker’s short screenplay he co-scribed with Jeff Seidman. The thriller stars Karen Gillan, Brenton Thwaites, Rory Cochrane and Katee Sackhoff.

Relativity has released the following official synopsis for ‘Oculus’:

Ten years ago, tragedy struck the Russell family, leaving the lives of teenage siblings Tim (Thwaites) and Kaylie (Gillan) forever changed when Tim was convicted of the brutal murder of their parents. Now in his 20s, Tim is newly released from protective custody and only wants to move on with his life; but Kaylie, still haunted by that fateful night, is convinced her parents’ deaths were caused by something else altogether: a malevolent supernatural force­­ unleashed through the Lasser Glass, an antique mirror in their childhood home.

Determined to prove Tim’s innocence, Kaylie tracks down the mirror, only to learn similar deaths have befallen previous owners over the past century. With the mysterious entity now back in their hands, Tim and Kaylie soon find their hold on reality shattered by terrifying hallucinations, and realize, too late, that their childhood nightmare is beginning again.

For more information on ‘Oculus,’ visit the horror-thriller’s official website, as well as its Tumblr, Twitter and Facebook pages. Watch the new film’s teaser trailer below. 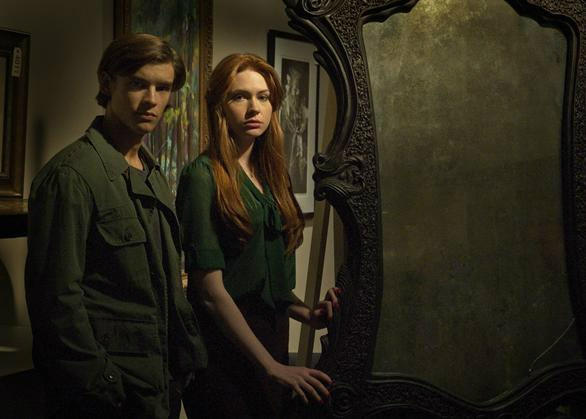