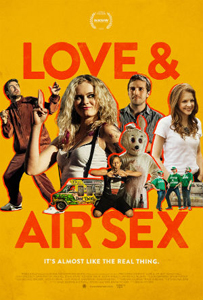 What better way to ring in Valentine’s Day than with a movie that involves air sex? Yes, air sex. Think air guitar, but pretending to have sex with an invisible partner instead of playing an invisible guitar.

“Love & Air Sex,” formerly titled “The Bounceback,” hones in on a guy named Stan (Michael Stahl-David). When Stan finds out that his ex, Cathy (Ashley Bell), is planning to visit Kara (Sara Paxton) in Austin, he hops a flight to Texas so that perhaps he just might bump into her there. Making his effort even less discreet, Kara and her ex, Stan’s good buddy Jeff (Zach Cregger), are in the middle of their own romantic meltdown, further fueling their mission to ensure Cathy and Stan stay broken up.

ShockYa.com had the privilege of covering “Love & Air Sex” back in March at SXSW and now that the movie is finally making its way into theaters in New York City and playing on a number of VOD and digital platforms including iTunes and Amazon Instant Video, we thought it’d be fitting to revisit our interview with director Bryan Poyser, Bell, Stahl-David, Paxton and just a little bit of Cregger. Check out the SXSW interview below and click here for all the details on the “Love & Air Sex” February release plan.