Working hard to distinctively create an original identity for yourself, and distinguish yourself from similar voices, can be a challenge for some people as they search for their place in society. Not only do the struggling characters in the new action crime drama, ‘Easy Money: Hard to Kill,’ strive to prove their worth and value amongst their fellow gangsters in the film, but the sequel to the 2010 Swedish film, ‘Easy Money,’ also works to showcase it’s uniqueness in the genre. With the help of the talented portrayal by lead actor Joel Kinnaman, and the stunning stunts featured throughout the movie, director Babak Najafi created a worthy follow-up in the series.

‘Easy Money: Hard to Kill’ follows a diverse group of Swedes, Arabs, Spaniards and Serbs, living in the underground criminal world of Stockholm. The criminals are trying to find ways to make money quickly, as a way to rise out of poverty, while also trying to fix their culturally instilled inferiority complexes.

JW (Kinnaman), a once poor, relatively naive business student who was unexpectedly pulled into the drug trade to earn the wealth he thinks his classmates will respect, is finishing a three-year prison sentence he began in the original film. While serving his sentence, he created trading software that he and his wealthy business partner, Nippe (Joel Spira), are about to sell to a bank. When JW realizes his partner double-crossed him in the deal, he reverts back to his old life of crime.

In an effort to turn his life around again, JW then unexpectedly becomes friends and allies with Mrado (Dragomir Mrsic), who he betrayed in ‘Easy Money.’ The two set out to steal a bag of money from a middle man who reports to criminal lord Radovan (Dejan Cukic). The equally socially and economically repressed Mahmoud (Fares Fares) and Jorge (Matias Varela) also set out to prove their worthiness of moving up the criminal ladder by also setting out to the money, much to the apprehension of their families.

Kinnaman was the true standout star in the gritty action crime drama, as he showed his acting versatility through his character’s tragic and spiraling descent back into the criminal world. As JW was finishing his sentence, he was optimistic that he could honestly change the course of his life by honestly setting up the business arrangement with Nippe. But when his supposed partner unexpectedly turns on him, and took the credit for the job for himself, Kinnaman captivatingly and instantly reversed his distressed character’s mindset and motivations. No longer wanting or needing to prove to his parents, the parole board or society as a whole that he did completely change his ways while serving his sentence, JW set out to take back what he thought was rightfully his. Not only angrily exposing Nippe’s betrayal to his friends, the actor completely and authentically focused on his anti-hero’s desperate attempts to prove his credibility as a serious contender in the criminal underworld.

The action sequences JW and his fellow criminals engaged in during ‘Easy Money: Hard to Kill’ were enthrallingly created in part by stunt coordinator Kimmo Rajala, who uninhibitedly choreographed non-stop, intensive fights and shootouts between the numerous gangsters. Whether JW is helping Mrado, who’s confined to a wheelchair, are gunning down Radovan’s men to grab the money, Mahmoud is defending himself from his bosses for not properly keeping track of the prostitutes in his possession, or Jorge is finding a way to disentangle himself from his car after getting into an accident as he tried to evade police, the characters are continuously thrust into dangerous, but engaging, physical altercations. Rajala also creatively set up the action-filled stunts with such a sense of mystery that it was sometimes unpredictable who would survive the fight. But that intrigue greatly helped maintain the suspense of which characters were set to return for the final installment of the ‘Easy Money’ trilogy, subtitled ‘Life Deluxe.’

‘Easy Money: Hard to Kill’ is a fascinating second installment in an intense action crime series focused on the emotional motivations of criminals yearning to settle a vendetta against their counterparts. The true anchor of the story is Kinnaman, who offered a realistic, edgy nuance in his portrayal of the struggling, still gullible former business student, who still unwisely thinks his ill-intentioned cohorts want to help him succeed. Once JW realizes the world has no desire to truly help him improve his life, the actor effortlessly transformed his character into an aggressive extravert, who will take whatever means necessary to get what he wants. Combined with the thrilling stunts and action sequences created by Rajala, the follow-up to ‘Easy Money’ courageously offered a chilling, realistic view into the drastic means criminals will take to improve their positions. 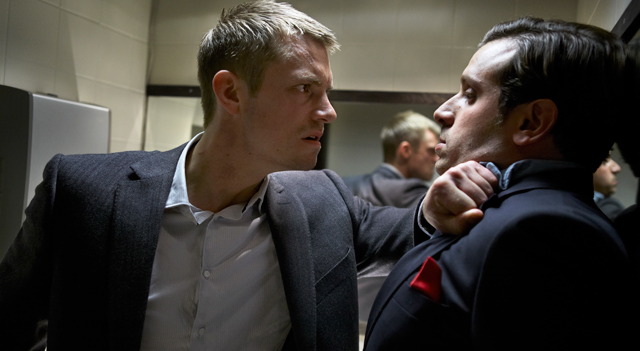