Love is in the air! Love for “The Lego Movie,” love for Ron Howard, love for Robert Schwentke, Odeya Rush, Chris Pratt and Black Widow. Love for just about everything and everyone except “Winter’s Tale.”

Warner Bros. is currently making arrangements to bring Howard aboard to direct “The Jungle Book,” Schwentke just locked the gig to direct the “Divergent” sequel, “Insurgent,” Rush will star alongside Jack Black in the “Goosebumps” movie, Pratt could be circling yet another big-name project and Kevin Feige revealed that Marvel is exploring the idea of a Black Widow standalone film. And then we’ve got “Winter’s Tale.” $80 million-budgeted, star-studded “Winter’s Tale” that opened at #7 with a mere $7.8 million weekend one total.

Find out what demolished “Winters Tale” at the box office, who snagged the BAFTA honors and more in your weekly Movie News Cheat Sheet.

1. Ron Howard Takes “The Jungle Book” for Warner Bros.: Warner Bros. Pictures’ live-action adaptation of “The Jungle Book” may have lost Alejandro Gonzalez Inarritu in January, but the studio just found someone to take his place – Ron Howard. According to THR, Howard is currently in talks to helm the film about an orphaned boy named Mowgli who’s raised by wolves in the jungles of India. Should the deal go through, Howard will go head-to-head with Jon Favreau who’s busy working on his own live-action adaptation of “The Jungle Book” for Disney due in theaters on October 9, 2015.

2. “Lego Movie” Outtakes: Can’t get enough of “The Lego Movie?” You’re not the only one. After just two weeks in theaters, the movie already has nearly $130 million in the domestic bank and over $180 million worldwide. Even though “Lego” is clearly a certified hit, Warner Bros. made a play to keep the momentum going by releasing some new material – a blooper reel. Check out Emmet, Batman, Vitruvius and the whole gang botch their dialogue, make fun of each other and survive grappling hook blunders by clicking here.

3. Robert Schwentke to Direct “Divergent” Sequel: Even though yet another young adult book-to-film adaptation just tanked, Summit Entertainment is still confident in “Divergent” because even though the film doesn’t hit theaters until March 21, 2014, they’ve already got Akiva Goldsman working on the sequel script and now Robert Schwentke attached to direct it, too. Schwentke is responsible for hits like “Flightplan” and “Red,” but also has a couple of duds to his name too, specifically, “The Time Traveler’s Wife” and “R.I.P.D.” On top of that, nothing on his resume really suggests that he’d make the best director for this particular material. Films like “The Illusionist” and “Limitless” showed that Neil Burger could excel in building complex characters and depicting mind-altering scenarios, but Schwentke has nothing of the sorts. Still, Erik Feig, Lionsgate’s president of production insisted, “We are excited to announce that we have found the perfect director to carry on the story of Tris Prior and the expanded world of ‘Insurgent’ in Robert Schwentke.” Feig also added, “Robert, with whom we have already had a successful relationship, has proven a master storyteller in multiple genres.” Hopefully Feig is right, but before we get ahead of ourselves, we’ve got wait and see if “Divergent” does well enough to earn “Insurgent” the go-ahead. (via Summit Entertainment)

4. Jack Black Gets a “Goosebumps” Co-Star: If you don’t know who Odeya Rush is now, you will soon because not only will the 16-year-old Israeli actress appear alongside Meryl Streep and Jeff Bridges in the adaptation of “The Giver,” but then she’ll star in the new “Goosebumps” movie with Jack Black, too. According to The Wrap, Black is locked to play Mr. Shivers, “a Stine-like author whose scary characters literally leap off the page, forcing him to hide from his own creepy creations.” Rush will step in as Mr. Shivers’ niece, a quirky young girl who recruits her neighbor to fight off her uncle’s creations.

5. Chris Pratt & Danny McBride to Lead the “Knight Rider” Movie?: Chris Pratt’s been a familiar name for quite some time now, but soon enough, he could be one of the most famous stars out there. Not only is “The Lego Movie” a certified hit, but “Guardians of the Galaxy” is currently swimming in pre-release hype and he’s got “Jurassic World” on the way, too. He’s already got three high profile titles to his name; why not add a fourth? There’s been talk about a “Knight Rider” movie for about eight months, but now it seems as though the project could really be coming together because Schmoes Know is reporting that both Pratt and Danny McBride are in talks to join the cast with Pratt possibly going for the role of Michael Knight and McBride voicing Michael’s artificially intelligent talking car, KITT. There’s been no confirmation from The Weinstein Company just yet, but as Schmoes Know points out, should this rumor prove to be true, it does suggest a shift in tone with “Knight Rider” potentially taking the “21 Jump Street” route.

6. Black Widow Solo Film in the Works: Iron Man, Captain America, The Hulk and Thor all have solo films; it just makes sense that Scarlett Johansson’s Black Widow would be next in line. Sure enough, Marvel Studios President Kevin Feige recently told Total Film that they are actively developing a film with Black Widow at the core. Feige noted that “Avengers: Age of Ultron” will begin filming at the end of March and further explained, “[Black] Widow’s part in that is very big. We learn more about her past and learn more about where she came from and how she became in that film. The notion of exploring that even further in her own film would be great, and we have some development work with that.” On top of that, Feige also revealed that “Captain America: The Winter Solider” will change the dynamic of the Marvel on-screen universe. He explained, “We wanted Cap and really the entire cinematic universe to be very different at the end of ‘Winter Solider’ than it is at the beginning. Therefore when we meet the Avengers at the top of ‘Age of Ultron,’ it’s a very different landscape than we left them at the end of the film. Partially that’s because we love the rhythm that the comic books have developed – each of the characters appear in their runs, occasionally they get together for a big event or crossover series, they part again, and then they come back together again.” (via Comic Book Movie)

7. Did CNN Reveal the Best Actor Academy Award Winner?: CNN recently ran a segment that featured a shot of an Oscar plate that read: “Academy Award to Leonardo DiCaprio Best Performance By an Actor in a Leading Role ‘The Wolf of Wall Street’ 2013.” It’s rather understandable that the Internet had a meltdown with many blaming the network for revealing the winner early because who knew the Academy printed plaques for all the nominees before the winner was actually announced? In fact, final voting for the Academy Awards hadn’t even begun when this piece aired. Voting commenced on February 14th and wraps up on February 25th, a little less than a week before the winners are announced at the March 2nd ceremony. All you DiCaprio fans better keep your fingers crossed because the Best Actor race is nowhere near a done deal yet. (via Cinemablend.com)

8. BAFTA Winners: The EE British Academy Film Award winners are in and, as expected, both “12 Years a Slave” and “Gravity” hit it big. “12 Years a Slave” locked in two wins for Chiwetel Ejiofor’s performance and Best Film, but Alfonso Cuarón is the one that walked off with a total of six honors for his film. Not only was he named Best Director, but “Gravity” also won Best Original Film Music, Best Cinematography, Outstanding British Film, Best Sound and Best Visual Effects. As expected, Cate Blanchett snagged the Best Leading Actress honor, but surprisingly, it was Steve Coogan who made off with the Best Adapted Screenplay award for “Philomena,” beating out “12 Years a Slave,” “Behind the Candelabra,” “Captain Phillips” and “Wolf of Wall Street” while Will Poulter took the EE Rising Star award over Dane DeHaan, George MacKay, Lupita Nyong’o and Lea Seydoux. You can check out the full list of BAFTA winners right here.

9. Trailers: “Think Like a Man Too,” “The Purge: Anarchy,” “Tammy:” Less than two years since “Think Like a Man” rocked the box office with a $33.6 million debut in just 2,015 theaters, the trailer for the sequel is here. There’s nothing particularly laugh-out-loud-worthy in the two-minute 40-second spot, but the thrill of seeing the cast back together should be more than enough to spark interest. We’ve got a similar issue with the first trailer for “The Purge: Anarchy.” There’s nothing mind-blowing about the sequel’s new narrative, but, yet again, the appeal of that sky-high concept is bound to draw you in and entice you to circle back for more. As for the first teaser trailer for Warner Bros. Pictures’ “Tammy,” not only does the piece have some serious draw thanks to headliner Melissa McCarthy, but then she truly proves her worth, turning a simple fast food run into a hilarious bumbling escapade.

10. Box Office: Even though we added four new wide releases to the mix this weekend, “The Lego Movie” continued to demolish all the competition, taking another $48.8 million and holding on to that #1 spot. Newcomer “About Last Night” came in at #2, posting nearly $12,000 per theater for a $27 million debut. Even though “Robocop” did manage to claim $21.5 million of its own, that number leaves it with quite a way to go if it wants to match its $100 million production budget. “The Monuments Men” held exceptionally well making the move through its second weekend out, only dipping 31.8% and taking another $15 million to the bank. New entry #3, “Endless Love,” kicked off its run at #5. $4,620 per theater and $13.4 million in total is far from impressive, but it is more than expected. And then we’ve got poor “Winter’s Tale,” Akiva Goldsman’s $80 million book-to-film adaptation. Even though the movie rocks names like Colin Farrell, Russell Crowe and Jennifer Connelly, it only managed to take a mere $2,626 per theater and that left it with less than $8 million to start. (via Box Office Mojo) 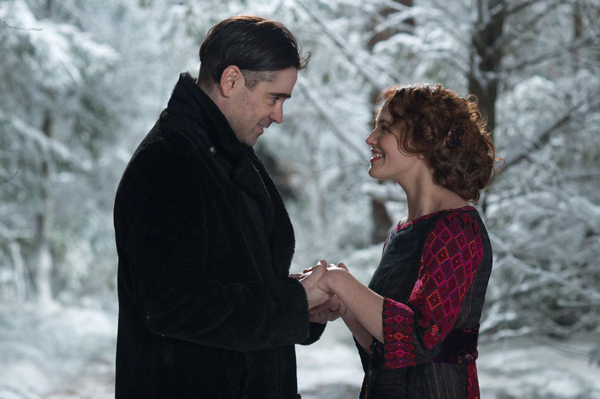