If you were hoping “Pompeii” would ditch the lava in exchange for nonsensical political and romantic melodrama, Paul W.S. Anderson’s latest is for you – and probably only you.

“Pompeii” opens with a baby Jon Snow – er, Milo. He thinks he’s all safe and sound, but upon emerging from his hut, finds his town and his parents being massacred at the hands of the Romans lead by Corvus (Kiefer Sutherland). Little Milo manages to escape, but ultimately is thrown into slavery and raised as a gladiator. Seventeen years later, Milo (Kit Harington) is a top fighter and chosen to wow the crowd in Pompeii in a one-on-one battle with their leading contender, Atticus (Adewale Akinnuoye-Agbaje), while Mount Vesuvius threatens to boil over right behind them.

When you pay to see a movie directed by Paul W.S. Anderson called “Pompeii,” you expect carnage, lava, explosions, nonstop action and devastating destruction. Sadly, you’ll have to settle for two of the five. “Pompeii” certainly adheres to that PG-13 rating because it’s absolutely impossible to overlook the lack of blood when Anderson has his characters slitting throats left and right. And the lava? You’d think there’d be some in a movie about a volcano eruption, but not here. There’s an abundance of ash and flying fireballs milking the extra dimension for all it’s worth, but lava didn’t make the cut. Fireball overload results in one explosion after the next as Anderson decimates his idyllic representation of 79 A.D. Pompeii, so sadly that means the other missing component is the non-stop action and that makes for an absolutely devastating flaw.

Had the film’s brigade of screenwriters (Janet Scott Batchler, Lee Batchler, Michael Robert Johnson) just adhered to the details mentioned in this review’s synopsis, “Pompeii” could have been an outrageous yet enjoyable action-packed romp with Harington and Akinnuoye-Agbaje at the helm. But no; instead we get a mere 20 minutes of Milo and Atticus as a highly engaging dynamic duo and then about an hour’s worth of political nonsense and predictable romantic melodrama.

The Romans are jerks and the folks in Pompeii want nothing to do with them. However, in order to improve conditions in the city, the leader of Pompeii, Severus (Jared Harris), needs to strike a deal with Corvus to get the necessary funding. Trouble is, Corvus is a total jerk and he’s got a crush on Severus’ daughter, Cassia (Emily Browning), so in order to keep his family and city safe, Severus has no choice, but to give Corvus his daughter’s hand in marriage. The scenario isn’t compelling in the least primarily because the debacle is moronic, but also because every single character involved in that portion of the script is painfully one-dimensional and lifeless.

Corvus has no layers whatsoever. His only agenda in each and every scene he’s in is to make people miserable for no apparent reason. His determination to bring Cassia home to Rome isn’t justifiable in the least. Sure, you could say he’s a horny guy with a thing for girls half his age, but that agenda doesn’t make him a threatening villain, just pathetic. And speaking of pathetic main players, Severus and his wife, Aurelia (Carrie-Anne Moss), are easily the two most ineffectual characters in the lot. It’s a wonder Severus manages to lead Pompeii at all because based on his dealings with Corvus, he’s a political leader that isn’t capable of negotiating, just rolling over and dying.

Browning doesn’t give a poor performance per se; she’s just stuck with a flat character in a totally predictable situation, and the same goes for Harington about half the time. It’s an absolute blast watching Harington fight side-by-side with Akinnuoye-Agbaje in a seemingly hopeless mission to take down the big, bad Romans, but the second he turns on the romance, he falls flat on his face. This absolutely stems from flaws in the script, but Harington still has to assume some of the blame for this one. He’s got zero charisma. He’s basically Jon Snow in a new place and time, and wearing a different outfit. Harington’s sole facial expression works well in battle, but when he takes that same look into his quieter scenes with Cassia, it dries up all of their chemistry and makes the progression of their romance downright laughable.

The best part of “Pompeii” is Akinnuoye-Agbaje. He absolutely nails the balance between taking the material serious enough that it’s suspenseful and exhilarating, but infusing it with just the right about of humor and levity so that you find yourself rooting for Atticus rather than judging him for making ridiculous decisions.

This is a disaster movie. Who wants to see a pretty boy brooding and famous faces using a bizarre array of accents talking politics? Let Milo and Atticus team up. Heck, let Milo get a girl, but you’ve got to keep the action coming. Had “Pompeii” featured its leading trio trying to survive the blast throughout the film, Anderson could have had something here, but instead, he crams all the good stuff into the third act, rendering it rushed, ludicrous and not half as exhilarating as it could have been. 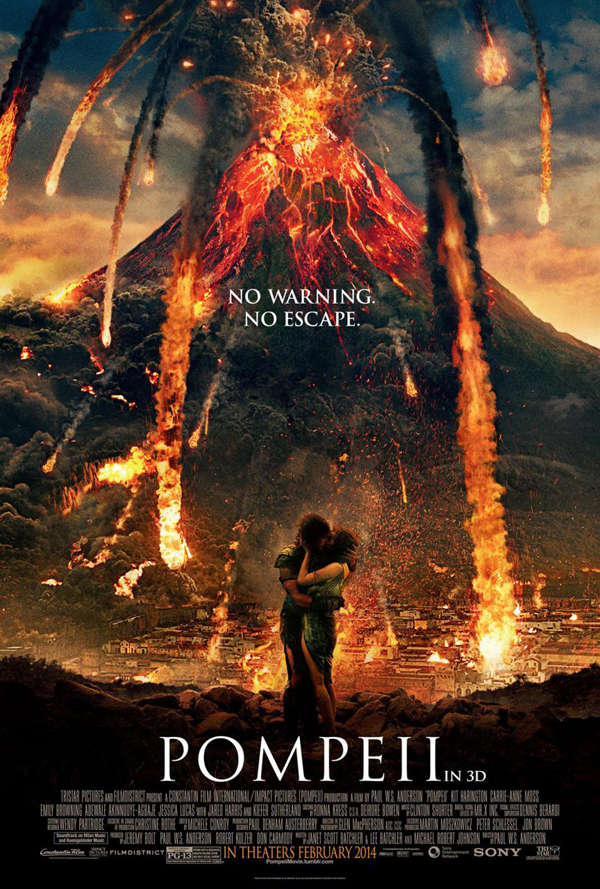