‘Non-Stop’ is set on a plane flying from New York to London. During the flight, U.S. federal air marshal Bill Marks receives a series of threatening text messages, stating that a passenger will be killed every twenty minutes unless $150 million is transferred into a secret bank account. When the bank account is discovered to be under Marks’ name and a bomb is found aboard the plane, branding him as a hijacker.

Why did this subject matter interest you?

Jaume Collett-Serra: I was fascinated by the concept of shooting on one set, as well as exploring the Air Marshall world. Plus I’m afraid of flying so I thought it would be interesting to focus on this general fear, choosing a different angle from the usual terrorist thriller. Everything was inspired by the real air marshall situations or potential scenarios, as well as the fight techniques, that inspired the scene that occurs in the bathroom, that took two weeks of rehearsal and an entire day of shooting and we used a still camera and had 72 cuts. It was entirely made in editing, since we didn’t shoot the fight in order, considering we had to take a wall off each time to shoot from different angles.

In the story it all revolves around technology, with the use of smart-phones, was that the trigger for the tension?

In old Hitchcock movies the telephone was used to deliver information and was the way out of trouble. Now things have switched, since we always are connected: in Non-Stop it’s the phone that becomes the means to complicate the character’s situation.

You chose to show on screen many of the texts…

What were the major challenges of shooting at JFK airport?

The time it took to walk all the equipment and people in a locked gate. We had a 16 hour day, of which only 3 hours were dedicated to getting us in with all the security controls.

Do you think people have become more vigilant or paranoid with the post 9/11?

Julianne Moore: When constructing entertainment movies, there is a tendency to exaggerate natural fears, ghosts, devils. When you go on an airplane you somehow have to give up control of things. This is what I liked about this script, that has a Hitchcockian event that becomes a classic entertainment.

Liam Neeson: Non-Stop certainly is playing on nightmares of people, but let’s not forget it’s entertainment. Undoubtably without 9/11 this film wouldn’t have been as effective.

Did you have any kind of physical training for the fight scenes?

Liam: In past films I had martial arts training, but not in this film, it would have looked too corny. I worked closely with a man who is in Special Forces and trains there, so that the combat and fights would look real and exciting.

Do you remember your first flight?

Liam: I was a late developer in every department, my first flight was when I was 21 years  old, from Amsterdam to Belfast for a theatre course.

Julianne: I don’t remember it because I was too young, but my mother told me it was when I was 5 years old and I was flying back with her from Panama, since my dad was working there as paratrooper.

The film somehow criticises the security at airports, how safe do you feel they actually are?

Liam: I love flying, and I totally feel safe.

Julianne: People in airports are meticulous and thoughtful of what is happening, I think there’s a great group effort.

The entire film is shot inside an aircraft, how was the intimacy with cast and crew during production?

Liam:  It was great for us actors, we were in first class! The crew had a tough time since they had to hide from the camera and squeeze in tight spaces. There was a lot of work, also with 100 extras, for 92 nights of shooting.

Julianne: It felt a bit like chickens being lead out of a pen! But it was a terrific group of people, with the cast and crew.

All the characters maintain a certain dose of mystery, is this the reason why the suspense works so well?

Julianne Moore: That is the reason why I liked it from the very beginning. It reflects what happens in real life: people don’t know who you are or what you do. Some might know you just for your first name. We don’t saying everything about ourselves to people we just met. Usually in movies we are used to knowing everything about characters and their backstory, but not here, we discover things little by little and this maintains the realism.

Liam Neeson: For our performance we all relied very much on the director, who was very meticulous in helping us out. Every little nuance or gesture would influence the symphony of the entire thriller and create that feeling of suspicion that falls on a variety of characters.

What kind of travellers are you, when people recognise you?

Liam Neeson: I send them all to hell, especially the kids…I’m joking of course! I actually don’t get much hassle, I’m also much at ease.

Julianne Moore: I talk to people quite often, especially when I see women with children, as a mother I relate to them. 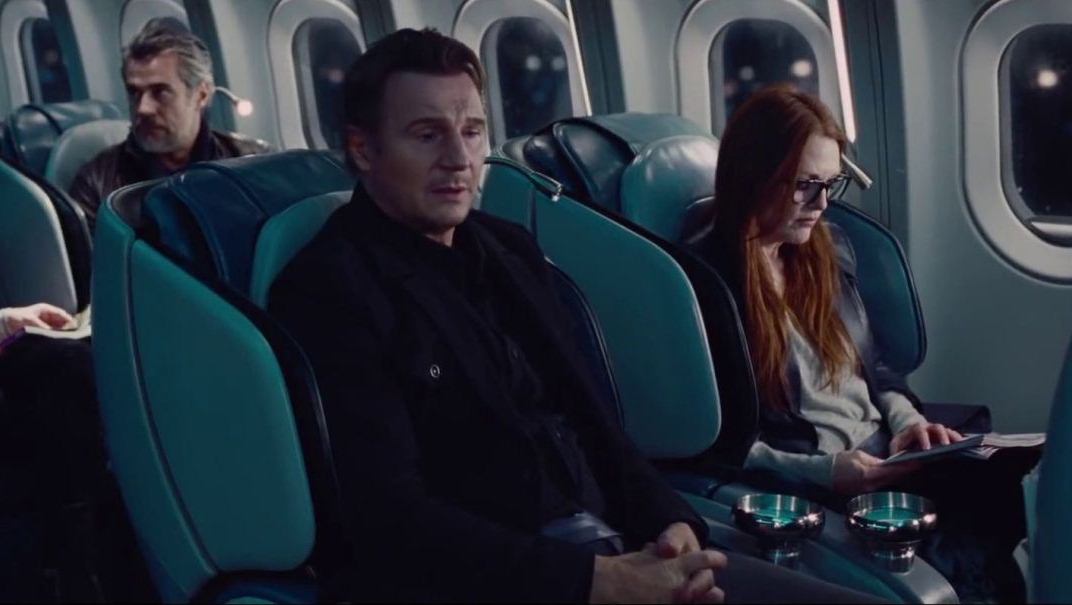