“Kelly & Cal” marks solid feature debuts for both director Jen McGowan and screenwriter Amy Lowe Starbin. There are some hiccups here and there, but the title characters are so complex and well layered that the film is still undeniably absorbing.

“Kelly & Cal” kicks off six weeks after Kelly (Juliette Lewis) has her first child. Even though she loves her husband (Josh Hopkins) and they both adore their newborn son, the birth causes a rift in their relationship. With Josh working well into the night, Kelly’s left desperately in need of support and affection, and it just so happens that her 17-year-old, wheelchair bound neighbor Cal (Jonny Weston) is looking for the same.

Lewis establishes Kelly as a captivating character worth caring about right from the start. In just a single location with a mere handful of shots, we get a sense of what Kelly’s dealing with. She’s drowning under the pressure of being a new mother, but at the same time, it’s blatant that she means well and is eager to do what’s best for her family. With the basics in place within minutes, Lewis powers through the rest of the narrative, using both facets of the character to turn Kelly into a fully realized person who’s effortless to connect to and like. Her arc isn’t as profound as it could be because McGowan fails to provide a clear enough sense of who Kelly was prior to the birth of her son, leaving the viewer without a clear sense of how her life has changed, but even without that frame of reference, it’s natural to connect to Kelly, understand her thought process and hope she gets what she wants.

Weston finds just as much success bringing Cal to screen. He’s got the benefit of working with far more backstory, but Weston takes it one step further by turning the information into so much more than mere exposition. When Cal explains how he wound up in the wheelchair, you’re not just listening to a sappy story while he squeezes out an elegant tear; you naturally picture it. Kelly may have hit a rough patch, but she’s a bright, sensible woman, so it’s vital that Cal come across as a believable charmer and Weston absolutely nails it. He’s a confident quick talker that doesn’t miss beat and those qualities paired with the sincerity behind his effort to court Kelly makes him a particularly charismatic main player.

The likability and complexity of both characters absolutely explodes in a highly enjoyable friendship. Both are at their peaks when they’re together and that happiness is a huge draw, but it’s the fragile and enigmatic elements of that relationship that rock the power to make you particularly invested in their connection. Even though both are oozing with confidence and security when they’re with one another, McGowan never lets you forget that Kelly’s married and Cal is half her age. The appeal of seeing the pair so happy together is infectious, but, at the same time, so wrong and McGowan’s ability to keep both thoughts coasting side-by-side throughout the length of the film gives the experience a fitting degree of suspense.

Kelly’s individual arc does suffer from a lack of clarity. Sometimes it seems as though she truly is suffering from depression, but then she’ll be stuck with Josh’s mother (Cybill Shepherd) and sister, and it feels more like they’re just putting too much pressure on her. It actually does add an interesting layer, wondering if Kelly really does have a problem or if it’s just Josh’s family’s smothering causing the issue, but whether or not that dichotomy was a deliberate story component, it’s not refined enough to work and can be a bit confusing. Another weak spot in Kelly’s transition is directly connected to Josh. Like Kelly, he’s tough to understand because we know nothing about what he was like before having the baby. When we meet him, he’s too busy watching TV to pay much attention to Kelly and refuses to have sex. Is he stressed? Does he not love her anymore? It isn’t quite clear most of the way through the film, and even when that issue is finally clarified, the lack of chemistry between Lewis and Hopkins leaves you unconvinced anyway.

The chemistry between Lewis and Weston, however, is there and it’s the chief appeal of the film. Some scenes have hints of poor shot selection, there are a couple obvious uses of ADR, there’s one noticeably heavy-handed fade to black at the tail end of the film, and the script does have weak spots, but the connection between Kelly and Cal trumps all. Their romance may not be right, but their friendship most certainly is and the appeal and admiration of their connection makes the film a particularly enjoyable, engaging and fulfilling experience. 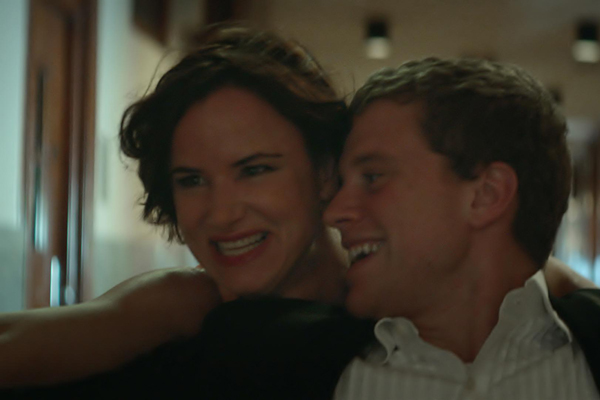 Cancel reply
Chef Gets A New Clip
Osbournes expected to spend more time in LA after their UK mansion suffers $500,000 damage in floods
To Top