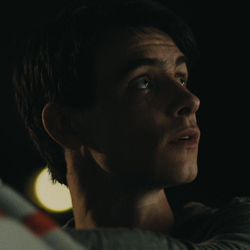 Ever dream of leaving everything behind and embarking on a solo road trip for a little me time? Writer-director Bryan Reisberg once did and even though he never did go on that getaway, he repurposed that desire into his very first feature film, “Big Significant Things.”

If you’re only familiar with Harry Lloyd from his run on “Game of Thrones” as Viserys Targaryen, get ready for a major switch because here he plays Craig, a nice, normal standup guy who’s just a little overwhelmed by the fact that he’s about to move across the country and buy a house with his girlfriend. Rather than man up, stick by her side and take the plunge, Craig opts to lie to her, essentially run away and visit big things, literally – as in an enormous bucket and rocking chair.

While celebrating the film’s world premiere at SXSW, Reisberg and Lloyd took the time to sit down (and then stand up) to talk about the entire process from getting his first feature off the ground, casting Lloyd in the lead role, Lloyd’s driving skills, the politics of the world of “big things,” and loads more. Catch it all for yourself in the video interview below.