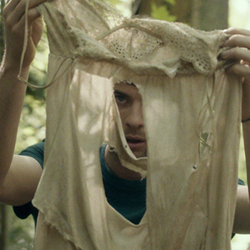 Her film is called “Honeymoon” and, as the title implies, it chronicles a couple’s first few days as husband and wife and, as the genre implies, shows what happens when their idyllic romantic getaway turns into a total nightmare. Harry Treadaway and Rose Leslie lead as our newlyweds, Paul and Bea. They love each other dearly and are completely in synch with one another until Paul finds Bea sleepwalking in the middle of the woods late at night, after which she’s never quite the same.

Shortly after the film’s world premiere, ShockYa got the chance to sit down with Janiak and discuss how she took a beautiful, grounded scenario and essentially turned it on its head. Catch what she told us about getting her first feature off the ground, production challenges, developing a through mythology for her villains, and loads more in the video interview below.

Warning: There are plot spoilers in this interview!