There’s a lot of us who have dreamt about being behind the wheel of a sweet car, speeding down the highway in some thrilling action-adventure film, but not everyone shares that fantasy. At first actress Imogen Poots wasn’t too excited when the “Need For Speed” script landed in her lap, but after a tiny bit of convincing, she was a welcome addition in this electrifying new film.

In “Need For Speed” Imogen plays Julia, a stylish woman employed by a high-end car dealer who eventually gets mixed up in this cool tale of revenge. We got the chance to speak with the rising star about her character, working with Aaron Paul once again, and her first time experience being exposed to the “stunt culture.”

What were your initial impressions of [your character], since she had to be capable but still out of her element?

Imogen Poots: I think from the start, you getting involved in the project, when they understood what kind of a character she was, there’s always a feeling of like, oh God, is this going to be dull – because it’s a genre movie, and it’s a studio film, but it’s very specific subject matter. She’s an exotic car dealer – this is the description, so you’d think she wears Hawaiian shirts? What’s the deal? But then when we got down to it, I wanted her to have something different, and I think when Scott cast Aaron and I, he certainly made a choice with the two of us, so I found comfort in that to kind of take her where I wanted to take her. And also being around Aaron [Paul], I’m not going to lie – that inevitably informs your performance. We were already buddies by this point, so even though you’re in character, the chemistry is there – it’s already kind of electric. So I felt kind of comfortable to have fun with her.

He said he kind of dragged you into this one?

Imogen Poots: He did? Okay, good – so I don’t have to say it. We were basically filming in Spain, doing this British film (“A Long Way Down”), and I remember very clearly I was talking to Scott Waugh on the phone. He was like, “I promise you, she’s not just like ‘the girl’,” and I was like, are you sure? Because it kind of seems like she is. And Aaron was next door just eating eggs sort of like, “did you say yeah? Are you gonna do it?” But I was intrigued by it. I also felt trepidation purely because I don’t love cars. I was like, is this going to be really dull? And once I knew the type of guy and director that Scott seemed to be and getting into it with Aaron, I said this could be fun. And I was like, if I’m ever going to do something like this in my life, I would be very happy to have Aaron by my side rather than not-Aaron.

How then does it feel to be the counterpoint to that, especially given that the romantic element is really downplayed in the film.

Imogen Poots: It is, you’re right. It’s funny – when I watch the film, it’s almost like an afterthought. I’ve pretty much just kind of kept to myself a lot of the time. The boys are awesome and obviously Aaron, I feel very close to, but Dominic Cooper, I think he’d be okay with me saying he isn’t the most outwardly testosterone-ridden guy. Where the other guys were like, “Yeah, we’re gonna go do this action today on our day off. We’re gonna go do this mad adventure and rent crazy mopeds!” Dom and I would go, “I’m just going to get a spot of lunch, and eat buns and things.” It’s funny – there was actually a moment when I think all of the boys planned this action day out, and they roped Dominic into it. He looked extremely nervous, just holding his swim trunks like, “Yeah, we’re going to go find this river and have a great time.” And I was like, “Really? Don’t you want to come with me and go eat sushi?” and sort of coaxed him away from the group. But I never felt in any way isolated or excluded, and I think that’s down to the director being aware of, you know, he’s got a wife, and he understands that it can be a quite hard environment, especially with all of the stunt guys.

Coming from the perspective of a person who wasn’t interested in cars, did you learn anything about their mechanics that you did find interesting? 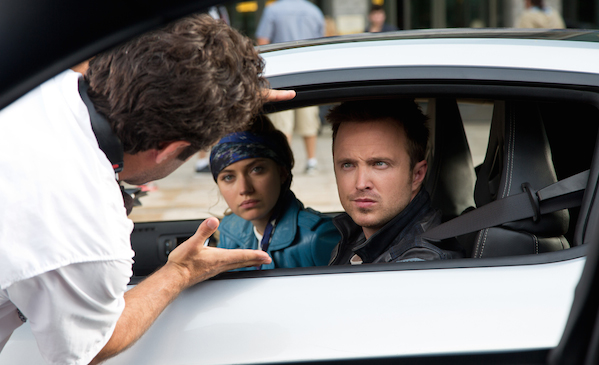 Imogen Poots: I would be crazy if I didn’t eventually have an open mind to it because I knew with Aaron, you’re surrounded by people who really go crazy for cars, and I’m sure people who go see this movie will know exactly what kind of Tiger-Mustang it is and all of these things. But the things I learned the most about are just the stunt culture and the ability these guys have to really push themselves to a crazy place, like daredevil insanity. That was interesting for me because I probably had a notion of stunt work just being heavyhanded mechanical action, when actually there’s a real delicacy to their work and the fragility too in terms of the danger element. So I learned a lot about that, and also the camaraderie of these stunt guys. It’s an emotional thing. It’s often like down through the families that they’re doing this and still doing this, and it was cool to be exposed to that for sure.

What are the advantages or disadvantages of being the passenger for these stunts? They might need you more than they would need Aaron?

Imogen Poots: I was pretty down to do a lot of it. There were times when Aaron was like, I’m going to give this one a go… I think we were speeding down a road that had lots of bumps on it. He was like, “No, I got this. We can do this.” I was like, we can? I’m getting out of the car, so have fun. Because you have to feel safe doing some of those things, to be comfortable to kind of focus on the performance, although she’s terrified a lot of the time. But being in the passenger seat is fine. And in terms of learning little things, I really didn’t have to do nearly as much as Aaron. I was often just kind of eating cake around the corner.

How tough was the helicopter lift sequence to shoot?

Imogen Poots: I remember that day I was extremely nauseous, and I want to say it was the heat, but it might have been one too many glasses of red wine before. So you’re sort of tilted like this, so you’re already feeling pretty s–t, and then they have the cameramen up with you. It’s a whole set-up, so a lot of these things would be just out in the open. We weren’t even in a studio or anything like that, but that was hard because the blood is going to your head. There was another time when I was actually upside down in the car, and it’s like “Boo hoo! Actress problems,” but when you’re upside for kind of ten minutes you start to feel really bad and I got quite panicked a few times. So moments like that can be pretty horrendous if you take note of what’s actually happening, but that was a funny thing. I liked that bit in the film too.

How much of the character’s costume did you have control over – and how important was that to you in developing her?

Imogen Poots: I fought so hard to get a headband or sunglasses. If I think about films, and I’m talking about an independent shot in New York, the idea of the character’s costume is integral – it’s an extension of them, it’s like everything. And you can go to town if you have time really exploring that, because it changes the way you feel and the way you walk. And with something like this, it was hard and it was a struggle sometimes to really try and shout out about “let’s do something unique.” You look at Patricia Arquette in True Romance, and okay, it’s a different type of film, but we always remember her leopard-print pants and the blue top and all of these things are so wonderful and you can really actually make an incredible statement for an era with a movie like that. But we had a great costume designer, Ellen Mirojnick, who did Behind the Candelabra, and she’s so talented, so having someone like her on board was a relief because she listened to what I was saying and she listened to what the studio wanted and you have to have somebody who’s able to kind of collaborate with both. But I really wanted a pink shoulder-padded suit.

“Need For Speed” comes out in theaters everywhere on March 14th.