Directed by Gary Fleder and penned by none other than Sylvester Stallone, “Homefront” stars Jason Statham as Phil Broker, a widowed ex-DEA agent whose past with a meth-running motorcycle gang comes back to haunt him. For ShockYa, Brent Simon recently had a chance to speak to Fleder one-on-one, about the movie (whose source material Stallone originally thought about using as a “Rambo” sequel), the advantages of location scouting with Google Earth and his affinity for dabbling in small screen work as well. The conversation is excerpted below:

ShockYa: It’s a lot easier for me to connect the dots to Jason Statham on this movie. How did the project first come your way?

Gary Fleder: (Sylvester) Stallone has a producing partner, Kevin King-Templeton, who’s produced a lot of his movies over the last few years, “Rocky Balboa,” “The Expendables,” what have you, and Kevin and I had been talking together about working on some stuff. We became friendly and were talking about collaborating on a few things. Less than a year before we actually made the movie Kevin gave me the script and said that Stallone had bought this to try to direct and star in 10 years ago, and at one point it had actually been talked about as a potential “Rambo” sequel. But it didn’t come together and had been languishing so [Kevin] asked me what I thought about this project. At that point Jason Statham had already read it and really liked it, and I read it … and (thought) it had the flavor of a contemporary Western, about this outsider coming to a town. It also reminded me some of “Man on Fire,” which was a film I really liked. I responded to it, and it all happened kind of quickly — between Jason’s interest and my interest, it happened pretty fast.

ShockYa: It’s based on a novel by Chuck Logan, which is in itself somewhat unusual for a movie of this sort, but there’s actually an entire series with the same character. Is it just one novel, or do you know if Stallone took any additional elements from other books?

GF: It was one book, published in the early 2000s, [that provided] the story. However, in the book, one of the major differences is that the mother, Broker’s wife, was still alive and was heavily traumatized from her experience in law enforcement. Sly made the decision, way before I was involved, back when he did the adaptation, that it was a single dad and there is no mother — that she’s passed away.

ShockYa: The film flirts with the idea that even its villains are somewhat remorseful — you have [certain characters] making decisions and then sort of realizing that things have spun out of control.

GF: With Gator specifically, James Franco’s character, what happens to him is that this scheme that he hatches is bigger than he can handle. He ignites this plan, and it doesn’t quite go as he planned it. It gets out of control. There’s a point in the movie where there’s a hand-off, where Franco hands the bad-guy baton to Frank Grillo, who plays this crazy, Hell’s Angel-type biker dude. And Franco is sort of on the sidelines watching this. And then in the last third of the movie the baton is passed back to Franco, and he has to try to fix all the pieces and he really can’t. It’s actually something you can really overlook, because people might think it’s just a been-there-done-that [type] of movie. But if you look at the movie I think you’ll see that the characters have a level of those dimensions — in fact, Kate Bosworth’s character really has an arc, she’s going through a change in the movie. It’s actually not your typical white-hats-and-black-hats kind of movie. There are different levels to what’s going on, and I found interesting things from the book, and I wanted to make sure that the movie expressed that.

ShockYa: I know that there’s football action in “The Express,” but the films that I most associate with you — “Kiss the Girls,” “Don’t Say a Word” and “Runaway Jury” — are more psychologically rooted than this. Had you directed quite as much as what I would characterize as meat-and-potatoes action scenes before?

GF: Well, I think it was action that was very grounded and naturalistic action. Ultimately, in “Homefront,” Statham’s character is very skilled in hand-to-hand combat and weaponry, and that became a bigger part of the story. Also, there was the sense that the movie is a thriller, actually. By the way, it’s not like James Bond, where he’s running along the tops of moving trains and on trestles and what not — it’s much more of a Don Siegel-style, grounded and gritty. One of my favorite scenes in the movie is the mano-a-mano scene between Statham and Frank Grillo in the woods, where they have no weapons — it’s just hand-to-hand combat. I loved it because it wasn’t some guy with a Glock shooting four guys, it was literally just two very skilled, very scary warrior-type guys going at it — it’s almost like a MMA match.

ShockYa: There’s a pungent quality to the film, aided by the fact that you shot on location, right?

GF: Like a lot of movies these days we shot in Louisiana, not only because there are tremendous tax incentives but (because) there are also really incredible crew and talent. It’s become like a second Hollywood, there’s an unbelievable crew base and actors — it’s phenomenal down there. So we shot there, however we really tried to push the envelope — we went to locations that had not been overshot. I feel like with a lot of movies and TV shows you watch that are shot there you can go, “Oh yeah, there’s that same house or street.” We went every which way, we went to places like Slidell, Ponchatoula and Manchac. One location that our production designer Greg Barry found was this abandoned plantation home in Slidell that was destroyed by Katrina and hadn’t been lived in since. We found it literally on Google Earth, went there and scouted it and ended up shooting there. So we found places that quite literally off the beaten path. I think we shot the movie in lots of different places in the state, that audiences haven’t seen, and have that real, incredible beauty — just some spectacular locations that we cobbled together to create our town.

ShockYa: What was your toughest day of shooting?

GF: I think ironically one of the hardest days was a scene between Franco and Statham’s characters, where they meet in that saloon-type diner, and it’s just a classic good-guy-bad-guy showdown. It was a scene that didn’t rely on action — it was just two guys having a conversation. And I think we all knew that if that scene didn’t work, didn’t land, didn’t ring true, then the whole film would sort of collapse, because it’s the first time where you have those characters come together. Statham’s character is trying to be fair and charming, he’s saying, “Look, I don’t want trouble, I just want you to back off.” That was a lot of pressure, getting that right and dialed in. And I think we got it right, I think the scene is very strong — if you watch it, Franco is playing the scene not like he’s some big strong guy, but like he’s playing around. He’s a guy that thinks the guy he’s talking to is already dead man walking.

ShockYa: After a film is done, how hard do you live and die with the theatrical gross of a film?

GF: I think the answer is that you always live and die with the theatrical gross of a film. My last two movies, “The Express” and “Homefront,” have not performed exceptionally well at the box office but (will) have had very good lives on video. But both of those films are films that, when they were tested for preview audiences, there was tremendous enthusiasm for — “Homefront” particularly scored incredibly well. Then the burden shifts from what they call playability to marketability. Here’s an example — “The Hurt Locker,” which several years ago won the Oscar for Best Picture and received tremendous reviews, made about half of what “Homefront” did at the box office. Hard to believe, but if you look at the numbers it made like $12 million or something. {Note: “The Hurt Locker” made $17 million domestically in theaters.} In other words, the people who saw “The Hurt Locker” really liked the movie, but for some reason not a lot of people went out to go see it. With “Homefront,” I think — well, it’s out of my control. I’m not a head of a studio or marketing department, I’m not deciding how much money is spent on commercials and posters and what not. It’s certainly a bummer for any filmmaker or actor to see your movie not perform where you think it should or could. “Kiss the Girls” is still my most successful movie financially — it was a hit, it won weekends in a row, it beat a Brad Pitt movie when it came out, it had a sequel spawned from it — but it’s a lot of luck and timing. People wanted that kind of movie at that moment. And when “Homefront” came out it came up against the second weekend of “Hunger Games” and it came up against “Frozen,” and the second or third week of “Thor.” Was the studio too ambitious trying to go up against some of those bigger movies? Maybe.

ShockYa: It’s a cannibalistic marketplace, but that’s also a function of the blockbuster mentality and distribution system that Hollywood studios have by and large chosen to embrace.

GF: Yeah, and also you’re choosing a movie’s date of release oftentimes many months or a year before its release, so you’re hoping or counting on this or that movie doing better or not better. For example, at the time we were worried about going up against the movie “Oldboy,” the Spike Lee movie, but that ended up  barely getting a release by its studio. So the answer is that you’re definitely bummed out when it doesn’t work as well as you’d hoped and you’re happy when it does work out. I think just from experience, having done this for 20-plus years and having had seven movies released, I find that I can’t get as emotionally involved in that, because ultimately I can’t control it.

GF: I’m not sure yet. There are several things that I’m looking at and preparing. I have a company, so I produce series and direct pilots for television. We’re entering and really living in a golden age of great television, where so many of the best screenwriters and actors are working in television — look at “House of Cards,” “Breaking Bad” and “True Detective.” So for me, it’s just about playing in both formats, television and film. Right now I’m about to shoot a pilot, and then after that I’ll be deciding on another film project.

NOTE: “Homefront,” which is already available on digital HD, comes to Blu-ray and DVD, along with a collection of deleted scenes, on March 11. 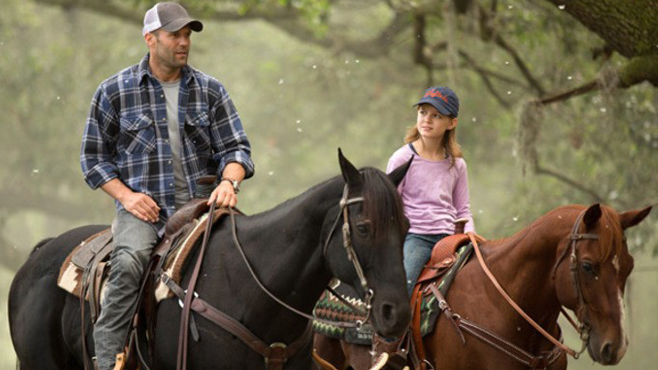 Cancel reply
Aaron Paul Didn’t Want to Do ‘Need for Speed,’ How He’d Like to Return to TV
Sony Pictures Animation Involves Genndy Tartakovsky on Several Projects, Brings Back Smurfs
To Top