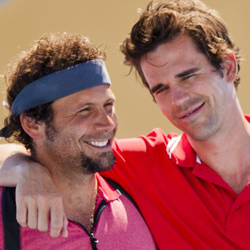 Jeremy Sisto wrote and produced his first feature length film and it’s quite good, but it certainly was a challenge for the prolific actor to achieve that end result.

Sisto leads “Break Point” as Jimmy Price, a former tennis star desperately clinging to his career. When his foul mouth and bad behavior cuts off yet another doubles partner, Jimmy decides to turn to the only capable player that’s stuck in his life no matter what, his brother Darren (David Walton). Even though the two are total opposites and neither intends to change his ways, they do make an effort to finally accept one another so that they can have a fighting chance at winning a qualifying tournament and making it into The Alerian Open.

“Break Point” just celebrated its world premiere at SXSW 2014 and, in honor of its big debut, Sisto sat down to tell ShockYa what it took to take this project from an itch to make a fulfilling film to acquiring the support he needed, powering through production and arriving at SXSW with a highly entertaining and touching movie in his hands. Check out the chat with Sisto below and click here for my full review of his new movie, “Break Point.”