Discover the ’10 Rules for Sleeping Around’ in a new clip, featuring Wendi McLendon-Covey and Michael McKean, titled ‘Emma Cooney, here I come.’ The clip was released in support of the theatrical release of the romantic comedy, which Screen Media Films will distribute on April 4.

Besides McLendon-Covey and McKean, ’10 Rules for Sleeping Around’ also features Jesse Bradford, Tammin Sursok, Chris Marquette and Virginia Williams. The film was written and directed by Leslie Greif, who also produced it with Harry Basil, Vince Maggio and Herb Nanas.

Screen Media Films has released the following synopsis for ’10 Rules for Sleeping Around’:

10 Rules for Sleeping Around tells the wildly amusing story of two young couples; one married, one planning to be, all best friends, dealing with the temptation of infidelity….both real and imagined. Ben and Kate are on the verge of marriage but waiting for Ben’s company to take off before committing. Their best friends Vince and Cameron have been married for years and are finally sharing the secret that keeps their relationship exciting…the ten rules for sleeping around.

As Ben and Vince’s e-publishing business is hanging on by a thread, Vince has been trying to land a contract with successful children’s book author, Emma Cooney, with hopes that this is the opportunity they’ve been waiting for. The only option to sign Emma is to follow her to the Hamptons and crash millionaire media magnate Jeff Field’s annual summer ball. But there is more to the Hamptons than meets the eye.

Watch the newly released ‘Emma Cooney, here I come,’ in support of ’10 Rules for Sleeping Around,’ below. 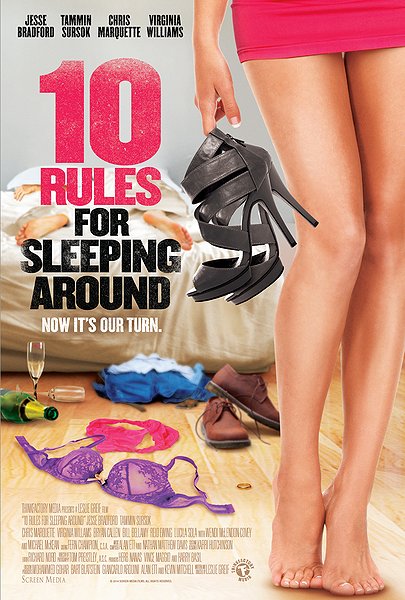