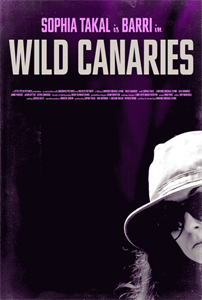 Husband-and-wife duo Lawrence Michael Levine and Sophia Takal have been making movies together for quite a while by assessing the resources available to them at the time and then building narratives from there. With “Wild Canaries,” on the other hand, it was the story that came first, challenging the filmmakers to acquire what was necessary to make this madcap mystery a reality.

Levine and Takal lead as Noah and Barri, a newly engaged couple sharing a Brooklyn apartment with a roommate, Alia Shawkat’s Jean. When their downstairs neighbor suddenly passes, Barri immediately comes to the conclusion that she’s been murdered. Even though Noah maintains that 84-year-old Sylvia suffered a heart attack, Barri insists that her son’s behavior just isn’t right and he must have a dubious agenda. With Jean’s help, Barri launches an investigation, tailing Sylvia’s son and even breaking into his apartment determined to find clues.

Shortly after the “Wild Canaries” world premiere at SXSW, ShockYa got the opportunity to sit down with Takal and Shawkat to discuss the genesis of this idea and the process of bringing it to screen. We ran through the challenges of acquiring financing, the sole tough day on set, shooting an independent film in New York versus LA, and loads more, and you can catch it all in the video interview below.