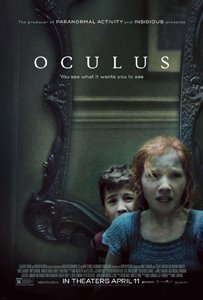 When Mike Flanagan’s short film “Oculus: Chapter 3 – The Man with the Plan” hit the festival circuit and conjured some buzz, there was immediate interest in turning it into a feature film. Trouble is, because the short involved just one character, the mirror and a few cameras in the room, all of those interested parties insisted on taking a found footage approach to the material, and that’s not the route Flanagan wanted to go. Holding strong to his original intent, Flanagan tucked “Oculus” away for quite some time until Intrepid Pictures came along and let him do it his way.

“Oculus” the feature focuses on Kaylie and Tim Russell (Karen Gillan and Brenton Thwaites). As kids, their parents (Katee Sackhoff and Rory Cochrane) are killed right in front of them and the authorities arrest Tim for the crime. Years later, Tim is finally released and eager to leave the nightmare behind, but Kaylie is still determined to prove his innocence. While Tim was away, she’s been busy developing a strategy and now she’s ready to face off against the real perpetrator – the mirror known as the Lasser Glass.

While in Austin, Texas for the film’s US Premiere, Flanagan took the time to sit down with ShockYa and run through the process of bringing the material from short to feature. He discusses the short’s festival run, coming together with Intrepid, developing the film’s non-linear narrative, fitting the mirror with a slightly askew reflection, working with his immensely talented young stars, Annalise Basso and Garrett Ryan, and loads more. You can check it all out in the full video interview below.