We’re talking about a hero with superhuman powers and a weapon with the ability to pinpoint villains via satellites capable of reading DNA and identifying a propensity to attack. It’s a downright outrageous scenario, but, dare I say, “Captain America: The Winter Soldier” still feels like one of the most grounded Marvel movies out there.

After the destruction in New York in “The Avengers,” Steve Rogers (Chris Evans) is attempting to lay low to a degree in Washington, D.C., by continuing to try to acclimate himself to the modern world while lending a hand at S.H.I.E.L.D. when necessary. However, when Steve comes to learn of an initiative to wipe out terrorists via enormous helicarriers that can detect evildoers before they even strike, his faith in the organization waivers. When Nick Fury (Samuel L. Jackson) himself has cause to believe that something isn’t quite right at S.H.I.E.L.D., it falls on Captain America to figure out who to trust so that the technology doesn’t fall into the wrong hands.

First and foremost, Evans is just an absolute natural as Steve Rogers/Captain America. There is a cringe worthy throwback to skinny Steve, but otherwise, Evans sells him as an exceptionally capable, believable and thoughtful hero with an honest heart. Whether you’ve seen “Captain America: The First Avenger” or not, in “The Winter Solider,” Captain America experiences an arc that rocks the power to resonate regardless of how many times you’ve seen him in action.

The film opens with an especially charming scene between Steve and Sam Wilson (Anthony Mackie). It’s a highly effective and enjoyable standalone moment, but, most impressively, it expertly acclimates you to this superhero realm. Yes, Steve runs much faster than Sam, but by showing that through a stunningly natural shot selection and addressing it via amusing yet frank dialogue, within minutes, the existence of a guy like Captain America just feels right, and that sensation is absolutely vital to the success of the rest of the film.

From there, Captain America rolls into his first mission of the movie. It is exhilarating and boasts quite a few brutal super strength hits, but it also comes across as a cut and dry mission. Just as one might slip into routine during an average day at the office, Captain America effortlessly goes through the motions while trying to rescue some hostages and obliterate their captors. By highlighting his familiarity with such a task so well, the moment that structure is rattled, the stakes go right through the roof. By taking the time to build this world and these characters, not only did directors Joe and Anthony Russo end up with a higher quality film, but also one that’s accessible to many, and perhaps even more so than the large majority of Marvel sequels.

But, of course, there is a need to appease the existing fan base and continue to enhance the franchise, and there’s absolutely no shortage of highly satisfying elements in that respect. Marvel continues to prove it’s got an exceptional handle on the details of this Universe, filling “The Winter Solider” with exciting connections to “The First Avenger,” “The Avengers,” future Marvel movies and more.

Scarlett Johansson is a standout as Natasha Romanoff/Black Widow yet again. Her combat sequences are mesmerizing and magnificently brutal, but it’s her weaker moments that continue to prove that the character really does deserve her very own film. She’s in a tough place in a number of respects. Even though she’s fighting for the greater good now, she’s got a grimy past and she’s stuck living with that now. In addition, within all of these complex missions and her rough and tough demeanor, she’s still a person with feelings and that’s more evident than ever in “The Winter Solider.” Samuel L. Jackson has always been a particularly remarkable element of this world, but, like Black Widow, Nick Fury gets more meaty material than ever in “The Winter Solider” and it turns him into so much more than a fun character to watch, but rather one with relatable concerns, feelings and goals.

Falcon is a bit one-dimensional compared to the rest of the group, but appropriately so. More on what’s driving him to risk his life and stand by Captain America’s side would have been nice, but ultimately, he still wins big as a source of comedic relief, a fresher fighting style and someone to root for in terms of how he relates to Cap’s mission. Emily VanCamp, on the other hand, is essentially a worthless prop as Kate/Agent 13. There are hints of a romantic connection between her and Steve that spark some interest, but that never amounts to much and, on her own, she’s got zero effect on the progression of the narrative.

In an effort to steer clear of spoilers, let’s just say that on the villain front, everyone is a big winner, but the one we can actually talk about, Sebastian Stan’s Winter Solider, is easily the most striking of the bunch. He’s got little to no dialogue yet that stone-cold expression will burn right through you. There’s no bargaining or announcing motives; The Winter Solider is out to do just one thing, take out Captain America, and his no-nonsense approach to that makes him especially threatening. However, it’s also important to note that while that description may suggest Bucky Barnes has been turned into a one-dimensional component, he does steamroll through the second half of the film with such a precise amount of context, that it manages to both satisfy your need to know while also making him a more engaging character by raising additional questions.

Visually, “Captain America: The Winter Solider” is a triumph. (Well, minus skinny Steve.) The shot selection has a very grounded quality to it that makes it effortless to believe everything you’re seeing, even the material that requires heavy effects and set extensions. Pair that with a group of characters that are performing breathtaking stunts, but also show off moving human qualities, and you’ve got an exhilarating superhero adventure that’s so much more than an action-heavy thrill, but rather a story you can really believe. 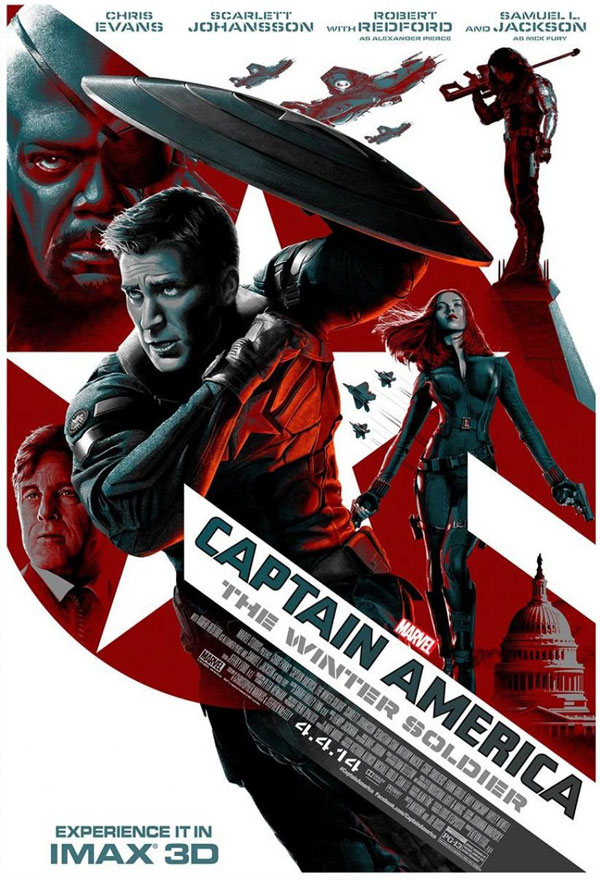