There will be a time when young, aspiring indie filmmakers return predominantly to shooting what they know, which will give us a surge in chatty, beer-soaked navel-gazing — a quality that would almost seem radical in today’s cinematic environment. This is not yet that time, however, as the extraordinarily derivative, forthrightly titled and essentially pointless “Alien Abduction” confirms. Eschewing more sophisticated and higher-degree-of-difficulty moodiness for lots of panicked thrashing about, this found-footage horror tale is an exercise in well-intentioned tedium.

The story centers on a vacationing family in Western North Carolina, comprised of two parents (Peter Holden and Katherine Sigismund) and their three kids — teenagers Corey (Corey Eid) and Jillian (Jillian Clare), and 11-year-old Riley (Riley Polanski), an autistic boy whose disorder is somehow presented as an excuse for his ever-present handheld videocamera. They head to the mountains, where the Brown Mountain Lights that color the night sky are in short order revealed to be a side effect of extraterrestrial menace, lending an element of foreshadowing to the matriarch’s comment about anal rape as they head into “Deliverance”-type territory. Brief respite comes via Sean (Jeff Bowser), a rugged, gun-toting mountain man who “knows these roads like the back of [his] hand.” Mostly, though, the movie just represents a bunch of scrambling, as members of the family are picked off by spindly, other-worldly monsters one by one.

“Alien Abduction” tries to justify its existence by claiming to be “based on true events,” but I’m from North Carolina, and I can tell you that there’s no heat to the Brown Mountain Lights, urban legend or otherwise, that holds much sway. Furthermore, screenwriter Robert Alvin Lewis simply doesn’t come up with compelling characters, dialogue or scenarios. This is basically an outdoor-set siege flick, only absent any twists or strong flavors. What isn’t merely boring is muddled. Do locals know, for instance, that the recurring lights signify alien activity, and hole up accordingly? Sort of, the film intermittently argues, in a roundly unsatisfying manner.

Director Matty Beckerman oversees what is, all things considered, a plus-grade technical package, even if cinematographer Luke Geissbühler is so in love with lens flares that he should, at the very least, rent a respectable hotel room if not just go ahead and marry them. (There’s the matter, too, of the aliens’ attacks being accompanied by some slightly more guttural variation on the crunchy whirring noises of Michael Bay is so fond of in the “Transformers” films.) The outdoor scenery and framing gives “Alien Abduction” a nice look when it has the time to collect its breath. The problem, of course — or at least one of the biggest ones — is its stupid and pointless framing device, funneling footage through Riley. This helps undercut any and all sense of drama, so jumbled and confusing are the various escape sequences. The film is also padded out to just over 80 minutes with a taffy-stretched mess of pre- and post-credits interview footage with “local witnesses” promulgating theories of conspiracy and cover-up. Nice try, guys — the only concealment here is on the part of the filmmakers, who are desperately trying to manufacture a bit of storytelling mojo in the editing room. 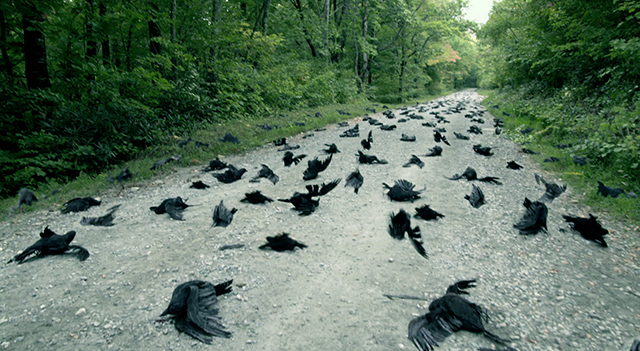