Those of us who ever wandered what life brought to L’Auberge Espagnole’s characters Xavier (Romain Duris), Wendy (Kelly Reilly), Martine (Audrey Tautou) and Isabelle (Cécile De France) are in for a great treat. There is a third part to this story, which director Cédric Klapisch is eager to tell.

Living in Paris for ten years Xavier have been married to Wendy and is now an adoring father of two children: Tom (Pablo Mugnier-Jacob) and a younger Mia (Margaux Mansart). The marriage is falling apart, and Xavier’s sperm donation to Isabelle makes matters worse. When Wendy falls in love with John (Peter Hermann), a New Yorker, and moves to New York City she takes the kids with her. What is Papa to do? Xavier takes a transatlantic flight and parks himself in Big Apple’s Chinatown.

If Xavier’s life in France was complicated he will now find himself a foreigner, speaking French and Spanish in an English-speaking country, with new laws. He will need a visa to prolong his stay in the U.S.A. He will need a job to improve his legal status as a newly divorced man, and he may have to find a new wife in a hurry to facilitate his Green Card application (Marriage of Convenience).

Situations like these have been explored in films such as Green Card, but director Klapisch presents us with chaos that will be resolved in a light comic manner.

Romain Duris who appears in every frame of this 117-minutes comedy puts a “spot-on” performance as father and an author whose life is complicated. Audrey Tautou as his ex-girlfriend Martine, gives us a portrait of a fourty-year old woman with a positive outlook on life, who is willing to try another round with him. Kelly Reilly, as his British ex-wife Wendy is a pleasure to watch with her stiffed upper-lipped British outlook on life. Cécile De France, as his Lesbian friend who wants to have a female partner, be a mother and have some affairs on the side, puts meat on Isabelle’s character that would look ridiculous if played any other actress.

Excellent supporting roles are played by Jason Kravits as Xavier’s second-rate lawyer who is willing to bend the law for his client’s benefit, and Sandrine Holt as Ju, an unexcitable partner of Isabelle, who faces any crisis situation with a poker face. Pablo Mugnier-Jacob, Margaux Mansart, Amin Djakliou and Clara Abbasi give good performances as children of Xavier and Martine, in four underwritten roles.

The film was shot realistically in parts of Chinatown, East Village, Manhattan Bridge, Tribeca and the Upper West Side, showing Manhattan that tourists may never want to see.

Chinese Puzzle will appeal to urban viewers in general and New Yorkers in particular. Though it is light on comic presentation, its subject matters are brought to us in a down-to-earth practical style that shows the daily trials and tribulations of any new comer, transplanted from Europe to the United States. 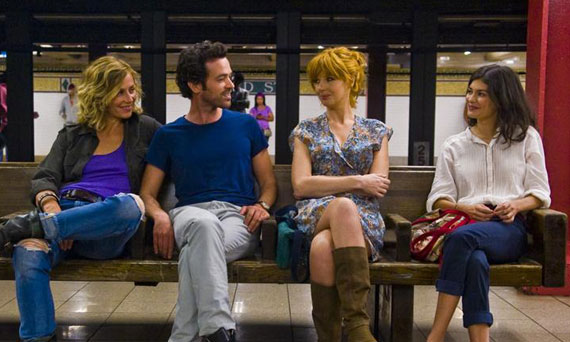