Some critics have called “Fading Gigolo” a John Turturro vanity project, but whether that’s true or not, who cares? The movie delivers a lovely, heartfelt treatment of both loneliness and horniness, the latter embracing the more comedic parts while the former is done with appropriate tenderness. The idea that two beautiful women would pay for sex is not realistic, of course, but again: so what? Have you seen Jaume Collet-Serra’s “Non-Stop?” Enough said.
The disregard of boring reality begins when Woody Allen in the role of Murray Schwartz adopts the name “Bongo” and becomes a pimp. Really? The owner of a failed bookseller as a procurer? All right, we’ll have to suspend disbelief. What’s more John Turturro, in the role of Fioravante, becomes a gigilo, receiving big bucks for his services by women who disregard his age and go for his manliness. No pretty-boy sobriquets for Turturro, who wrote, directed and stars in the hour-and-one-half production.

The idea for all this journey into unreality takes root when Murray learns from his dermatologist, Dr. Parker (Sharon Stone), that she would like to take part in a menage-à-trois with a female friend, the beautiful but heavily made-up Selima (Sofia Vergara). Fioravante proves to be a good lover, not so much by getting it on with the two beauties, but before the bed action when he meets and charms the doctor. He pays attention to Dr. Parker in a way that she has not been treated before, which ratifies the old idea that women think differently from men: they want to be listened to while men want to talk.

The more interesting segment of the film deals with a Fioravante seduction—for massage therapy, good talk and good food, nothing more. The client is Avigal (Vanessa Paradis), whose Hasidic rabbi husband had died of a heart attack leaving her lonely and boxed in by the demands of the Hasidic community of Williamsburg, Brooklyn. When she walks down the street with renewed confidence, we in the audience know that her happiness comes from her sensitive talks and massage from a Christian man, albeit one who plays the role of a Sephardic Jew. But the Hasidim on her block don’t like her happiness one bit. Avigal has her own beauty, the most refined kind if we compare her to Dr. Parker and Selima, making her the favorite choice of the titled gigolo—who gives her what may have been the first kiss she ever received notwithstanding the fact that had borne six children. However, she has a potentially serious Hasidic suitor in Dovi (Live Schreiber), who performs in the role as a member of the Shomrim, which is a Jewish self-defense force in the neighborhood. In this tale, however, Dovi goes beyond official duties by annoyingly questioning Avigal, asking where she is going, telling her to be back before dark.

The Jewish community of Williamsburg does not come across too well, and a too literate audience would think that nutty things go on in the privacy of the rabbi’s home. Suffice it to say that Murray is kidnapped as a suspected pimp and given a trial by a three-judge bench of elderly, bearded men who (are they joking?) note that if he is found guilty he might be stoned.

Much of the tale comes across as improvised: Woody Allen is Woody Allen, improvising with his usual, irritating use of the filler “you know,” but anyone with taste in movies will run to anything in which Mr. Allen appears. Some scenes that come across as filler focus on Murray as living with an African-American family, setting up a baseball game à la Jeremy Kagan’s “The Chosen” between the Hasidic kids who’d prefer to study and the young black males who assume they will have no problem beating them. 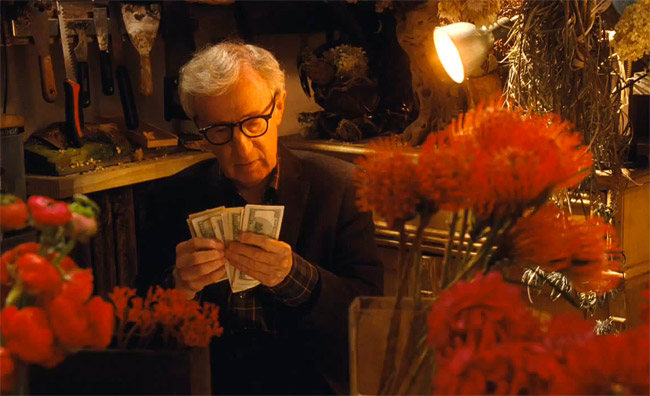