In Your Eyes Movie Review

Movie: In Your Eyes

The name Joss Whedon carries a lot of weight when it comes to genre-heavy storytelling. He’s been building a fan base since Buffy the Vampire Slayer aired on the WB network in 1997. With the big success of Marvel’s The Avengers, Whedon’s name is now considered one of the heavy hitters in Hollywood. While Joss Whedon didn’t direct the film “In Your Eyes,” he was the film’s screenwriter and executive producer. You can almost say that his signature style is all over the film, but that would be an insult to the good pieces of media with Joss Whedon’s name attached.

The film follows two people Rebecca, played by Zoe Kazan, and Dylan, played by Michael Stahl-David. They have a strange and intimate connection to each other, although they’ve never met or seen each other in real life. They’re lives aren’t connected via Internet tubes, but rather through their keen senses. Although Rebecca is in New Hampshire and Dylan is in New Mexico, they can experience each other’s lives through a shared sight and sound, and overall heightened feelings. “In Your Eyes” sounds good on the page, but the film’s director Brin Hill squanders the story’s high concept and good faith from potential viewers.

With their lives not as happy as they might lead on, we sooner or later, realize that Rebecca and Dylan are becoming closer and closer. As the story unfolds, it becomes apparent that that’s the end goal. While I have no problem with this unconventional love story, the filmmakers virtually do nothing to make it interesting or worthwhile. The film is distant with the heart and soul that would make an audience care about the would-be couple’s love to flourish. In a series of awkward “meet cutes,” the film’s third act devolves into an escape film, only because Rebecca and Dylan’s love needs yet another obstacle. Why not set the story and its characters 10 years earlier, when they are much younger? This would make the film exciting and fresh with the added sense of first love. It certainly seems that’s how the actors are playing the film. But as it stands, the characters’ informed lifestyles never come into play. They’re past experiences never inform they’re current decisions and uncertain future.

“In Your Eyes” is simply no good. The film’s tone shifts so sharply without the confidence and nuance of an assured director or production. Is the film a broad comedy, or a deeply dramatic romance? The film doesn’t really know either and handles both aspects of the film’s story so foolishly and overall clumsily. I’m a big fan of Zoe Kazan. Her role in Kelly Reichardt’s “Meek’s Cutoff” gave the film some much needed heart, but in the film “In Your Eyes,” she plays the character of a 27-year-old Rebecca as a 13-year-old girl learning about sex for the first time. It’s awkward. While I can see where the choice came from to play the character so broadly, the end result comes off as silly and manic that I question the character’s ability as a freethinking adult. Kazan’s co-star Michael Stahl-David doesn’t come off looking good either. His Dylan is less sympathetic and moronic, as the story unfolds.

Now I try not to blame actors for bad performances, especially when I know they’re more than capable as actors on the big screen. So I have no choice to blame the director who has no concept on how to manage a film’s tone and audience expectations for the fantastical. “In Your Eyes” jumps around as a science fiction film to a romance to a hospital heist film to a mental institution film. Now I’m not saying a movie can’t be all of these things, but it’s impossible to gain any footing with the film’s high concept and story when the director has such an inept vision for its story and narrative thrust. In more capable hands, perhaps “In Your Eyes” could be a better movie, but the director (and Joss Whedon’s script) gets in the way of that. The film’s characters have no real organic decisions and only seem to act to service the screenplay. Overall, the movie is just plain lousy and could’ve used another pair of eyes to bring the movie to fruition. Maybe if Brin Hill was somehow channeling Joss Whedon while making “In Your Eyes.” 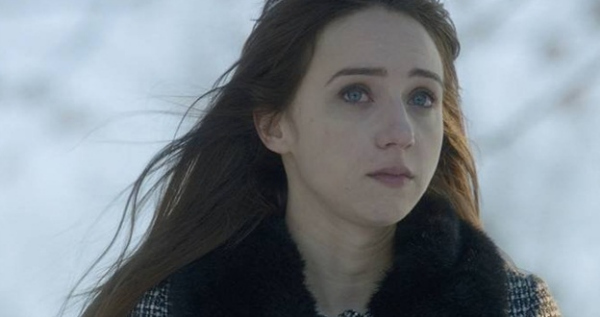