“Biker Fox” is a documentary that is more of an experience than it is a film. It’s an intriguing peek into the life of Frank P. DeLarzelere, aka Biker Fox, a Tulsa, OK person of interest who preaches health and fitness as well as the owner of an expansive muscle car parts business. ShockYa had the pleasure to interview the director of “Biker Fox,” Jeremy Lamberton, who described Biker Fox as “Jack LaLanne on Ritalin and cough syrup.”

How did you come to meet Biker Fox?

Jeremy Lamberton: Basically, he’s sort-of a well-known figure here in town and on the internet. I know he’s big in Sweden through is website. But I just met him just on the street one day. This bike route that he goes through is on a different part of the town that I was living in at the time, so I’d never even seen this guy. I didn’t even know who he was. That side [of town] was the south side of Tulsa, so he’s really well known. I was doing some work out there, and I kept seeing this guy ride his bike on the street and through traffic, doing performance art-like stuff, where he would squeeze in between cars and shake his ass and he’d do flips over the handlebars in 5 o’clock traffic and really putting himself in danger trying to entertain people. One day, he cut me off in traffic and I thought, I’m going to go meet this guy. I pulled into a Taco Bueno parking lot…and I walked up to him and yelled at him, “Who are you?” And he the first thing he ever said to me was, “Are you married?” So that’s really where the relationship all began, with this chance meeting.

After meeting him, what made you decide that he’d make a good documentary subject?

Jeremy Lamberton: Well, after that, we exchanged phone numbers and he told me about his story and I did a little research on him…and I thought, “Wow, what a guy. What a character.”…My producer partner Todd Lincoln and I co-founded and co-direct the Tulsa Overground Film and Music Festival…and every night of the festival we have a disclaimer that we have someone come out and [do] some type of entertainment. We’ve had belly dancers or a barbershop quartet or a Conan the Barbarian impersonator, and I thought this guy could come out and do his signature front-flip over the handlebars. It’s one of the things he’s known for doing. He’s actually in “The Guinness Book of World Records” for being the first person to do a front-flip over the handlebars and land on his feet. He’s been doing it all these years, and now he’s the oldest person to do a front-flip over the handlebars on his bike and land on his feet.

Anyway, he introduced the film, and…he was a hit…and [later], that’s when he explained to me that he dabbled in making films himself, like documenting stuff. He was doing a lot of nature photography and videography, and he was like, “Do you want to see some of it?” I was like, “Sure.” I was thinking he’d have a little movie on his computer or have a VHS tape, but he gave me a huge box full of mini DV and hi8 video tapes. I talking, like, 300 tapes…So I took it home and started going through the footage, but was blown away. Not only because of the volume [of tapes], but of what he was shooting. There are raccoons that live in the woods behind his house and over the years, he’s been hand-feeding these raccoons and got to a point where he’d have, like, 50 raccoons on his back porch…They’d start eating from his hand and sitting on his lap and getting into his house, then they’d go into his house and sit on his lap and sit on his furniture and he’s getting bit but still doing it. I thought, “Oh my God, this is crazy! This guy is out of his mind!”

Just the way he shot footage…was so fresh and had so much life because he wasn’t a trained cinematographer. He really just put the camera on a tripod and…just set it up and sit in front of the camera or stand in front of the camera and do all these things[.]…hundreds of hours of video tape. That’s what really got me into wanting to start shooting with him. I live on a 500-acre ranch in Tulsa, so I also do a lot of videotaping outside. I was doing similar experiments where I’d put a plate down at the edge of the woods, set my video camera and just let it roll…Here is this guy that has this similar obsession that I have. We really didn’t plan on making a film in a beginning; we had become friends and thought it would be fun. It wasn’t until he was arrested that we realized this could be an actual documentary.

Speaking of the arrests, we see in the film that the police seem to have it out for Biker Fox. What do you think about the run-ins yourself?

Jeremy Lamberton: When you’re an outsider in the Bible Belt, you’re asking for trouble. Tulsa’s a cool city, but the area of town that he lives in is the most un-bike friendly part of town. There’s a lot of two-lane roads, no bike lane. Even the four-lane roads, six lane roads, have no bike lane…It’s all the suburban sprawl and strip malls and, actually, the road that he lives right next to has every single chain, fast food restaurant you could ever imagine all in a mile. That’s where he’s out riding bikes and…performing and spreading this message about health and fitness. I just think that he stood out a little too much and there was one cop in particular who didn’t like him and there was definitely some harassment going on. Real harassment. There would be times–as mentioned in the film–where he would be pulled over for not having a reflector on his bike in the middle of the day and five cop cars would show up. I’d never seen anything like it…Obviously, they’re just trying to run him off and scare him. But since then, everything seems to be fine now.

That’s good, because I was wondering if the harassment had stopped after the film.

Jeremy Lamberton: Yeah, it has. It’s really just one cop in particular and I knew some people in the police force who said that [the cop] had a reputation for being a hot-head and if he has it out for this guy, then, you know, be careful. Since then, [Biker Fox] hired the former mayor to represent him and they were charging him high. It wasn’t like these were some misdemeanors–these were felony charges, saying he was throwing his bike at a moving vehicle, which is a law set up to go after people who throw acid or a cinder block off of an overpass on the freeway with traffic going by. They were trying to manipulate this law to stop Biker Fox. It was a stretch…and for a while, he pulled the reins and wasn’t going out, getting into traffic as much. But now, he’s a little bit older so I think he’s okay with just taking it a bit easier…He’s not quite as daring as he once was.

In the film, we also see–as he says himself–that one the one side, he’s this happy-go-lucky person, but when he’s doing business, he’s a completely different type of person. What did you think of that when you went through the film and saw this dichotomy of this person?

Jeremy Lamberton: It was interesting. I think that when there’s one extreme, there’s the other side of that. Where there’s hope, love and life, there’s darkness and despair and anger. That’s what was really interesting about his character. That became evident really early on. When you see him, when you’re hanging out with him on a work day, he’s really intense and he’s focused on getting these [car] parts done and out. He runs his own business…so all the pressure’s on him. He really gets pushed to a breaking point and he deals with a lot of older men who are retired, semi-retired, building their dream car and they want things exactly the way they want it, exactly when they want it and they have high expectations…That was what’s so fun about the character. He’d be preaching this idea of fitness and health–not just physical health, but mental health. Meanwhile, his life was falling apart and he was just raging. [He gives] really good advice, but he’s his own worst enemy. He’s not even taking his own advice.

When the film premiered, what did you think of the reaction people had after watching the film? I’m sure there was a big reaction just gauging my own reaction to the film.

Jeremy Lamberton: Oh yeah, there definitely was…Most people were like, “I love it, but I don’t really know what it is. If I were to recommend this film to someone, I wouldn’t know how to describe it.” I think that’s one of the great things about this film. Because Biker Fox is so distinct and a one-of-a-kind character, it really allowed us to try to make a new kind of film that fits his personality. We were really trying to get at how to make this film the purest Biker Fox experience as possible. Part of the problem is that he’s a natural performer. A lot of times, when you turn on the camera, he’s just ready to perform and he turns into that Biker Fox character…We were trying to figure out how to get him to not turn on the switch [to become Biker Fox].

What we ended up doing, since he had already shot so much footage and we liked his perspective and his angles and how he made stuff, to just give him the camera and we’d set up cameras all [around] his house on tripods, give him tons of tape…and say, “Okay, when you’re in the shop today, try to record at least a couple of hours of you working and when you’re on a bike ride, take your GoPro and let us into that experience.” It really gave the movie a unique shape and narrative structure. Biker Fox is shooting a lot of the movie, he’s narrating the movie and he’s on screen almost the entire time. So that was really key–to get into the mind of that character[.] 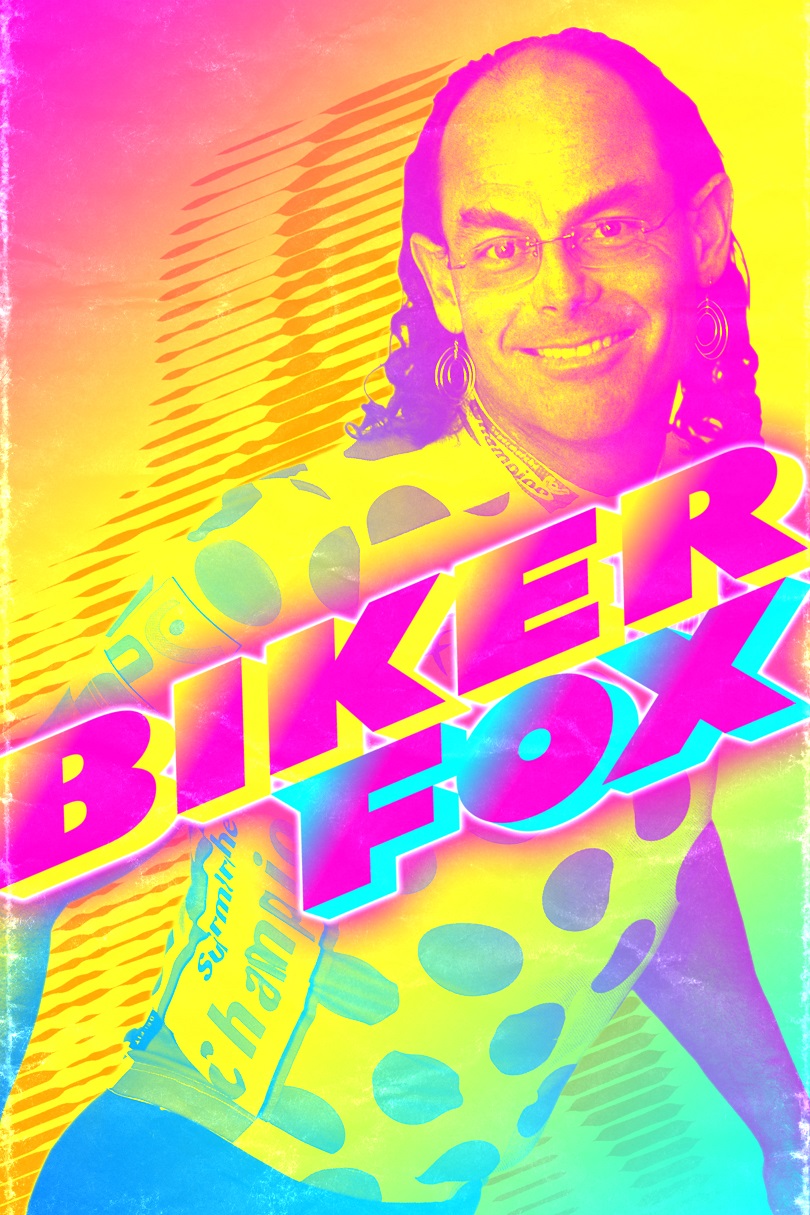