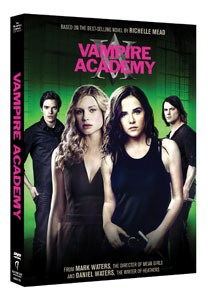 Miss out on all the drama, romance, madness and bloodsucking that went down in “Vampire Academy” back in February? Well, Rose (Zoey Deutch), Lissa (Lucy Fry) and the rest of the St. Vladimir’s crew are all on their way back for the film’s Tuesday, May 20th DVD and Blu-ray release.

Rose and Lissa are best friends, but Rose is a Dhampir and Lissa is a Moroi vampire so that means Rose is also Lissa’s protector – or rather a guardian-in-training for now. While the Moroi students at St. Vlad’s are required to study up on the elements and feed on willing donors at lunchtime, the Dhampirs are busy training to fight so that one day, they can protect the Moroi from the Strigoi.

There’s much more to it than that, but rather than explain it in text, why not get the information straight from the woman who created the world herself? ShockYa.com has an exclusive clip from the “Vampire Academy” DVD extras featuring book author Richelle Mead discussing how she came up with the races in this society as well as what it was like seeing her text come to life on screen. Check it out for yourself below and keep an eye out for “Vampire Academy” in stores and online in two weeks.