The kids I taught in high school for thirty-two years and the youths featured in Gia Coppola’s “Palo Alto” are poles apart in social class.  My charges have been mostly inner city, young people who in many cases have not had male role models in their homes.  In “Palo Alto” the teens have dads but they’re emotionally absent.  In one case, a mother neglects her daughter in favor of setting up engagements on her cell phone while the man of the house is zonked out on weed and who knows what other drugs.  These Northern California young people have been indulged by their parents, driving their own cars and throwing wild parties in which the elders are absent.  What adults are around to file complaints when their daughters are (statutorily) raped by others their own age or, in one case, by a man who looks in his mid-thirties?

“Palo Alto,” which is based on short stories by James Franco, features just a few characters in Franco’s book, allegedly the less sensational ones, though we wonder just how rebellious are the ones left on the cutting room floor or simply ignored.  Gia Coppola, a granddaughter of Francis Ford Coppola, evokes solid performances all around, though those in the audience who prefer a tightly-knit plot might have reservations.  Coppola tucks and weaves the boys and girls, with appropriate overlapping since, after all, the action takes place within and about the local high school, one with ample grounds for the playing of sports.  But the sports that these people are interested in are the kind that takes place indoors, the attractive girls actually making fun of the one in their group who is still a virgin.  Times have changed since I was a high-school student.

To their credit, nobody in the cast is weighed down by a screenplay that insists on the use of the word “like” in every sentence, and in fact from where I sat I didn’t hear a single invocation of the hoariest of teen clichés.  Though only one member of the school is shown doing homework, these kids are reasonably articulate whether or not they are stoned.

What allows Ms. Coppola to rise above the typical Judd Apatow fare and other illustrations of wasted kids is the sympathy she shows to all, whether they be promiscuous, or overly extroverted; whether conducting a suicidal mission in a Cadillac or delivering oral sex to people who are said in one instance to be lining up outside her home.

The action is seen through the eyes of the lead actress, Emma Roberts in the role of April, a senior in high school who has no idea what college she hopes to attend even though money is not a problem.  As the class virgin, she takes her energies out on the soccer field under the direction of Coach Mr. B (James Franco), whose interest in his all-female team goes beyond training them to kick a ball into a net.  As she wanders about the grounds of school and home, she has contact with Teddy (Jack Kilmer) who, despite awkward moments in which neither can think of what to say, are fond of each other.  In fact Teddy in a moment of weakness confesses that he loves her, though for kids this age, “love” may be equated with “fondness.”  Teddy is pals with Fred (Nat Wolff), whose charm comes from his ability to say and do whatever he pleases, whether he is playing verbal games with Teddy or throwing the slutty but pretty Emily (Zoe Levin) into the pool.

Teddy, the more stable person when communicating with Fred, winds up having to do community service for committing an infraction, but he is better off than Fred who, in a moment of crazed mania, drives his car in the wrong direction on the highway.  The girls’ conversation is anchored on boys, no surprise there, but what people of a different generation may realize how things have changed since the 1950’s is that the young women are sirens who entice the young men into their sexual fantasies.

Some of the filming is realistic, while other scenes are dream-like as though to sum up the high-school experience as part drudgery, part “let us now in youth rejoice.”  Coppola has done us a service by providing an entertaining view of part of Franco’s short story collection, giving us insight into what probably passes for truth, at least where privileged kids are concerned. 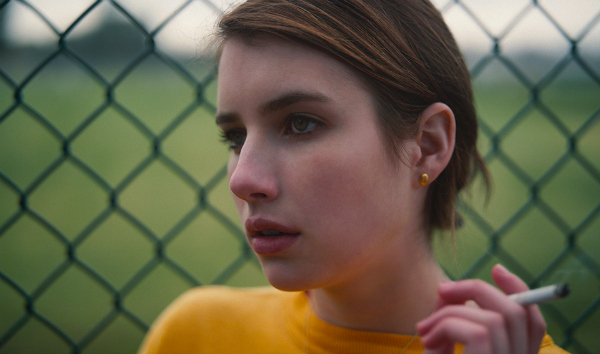