When a boy gets a bar mitzvah in America, we declare him to be a man, though given the extended childhoods that people have in modern, rich countries, we say this with a grain of matzoh.  The thirteen-year-olds in Lukas Moodysson’s “We are the Best” are hardly men, well, hardly women, but they’re not aware of this reality, nor would they choose to be the kinds of adults they see around them. “Boring!”  The troika whose early teen years are evoked by Lukas Moodysson in a film quite different from “Lilya 4-Ever” (a girl is lured to Sweden and winds up in the underground sex trade) are rebels presumably without a cause, though their being ostracized by more conforming teen society would likely fuel their anger.  Two of the three, Klara (Mira Grosin) and best friend Bobo (Mira Barkhammar) are androgynous as they adopt punk hairstyles.  Klara has more of a Mohawk and is the more assertive one while Bobo has a straight hairdo though we wonder why he’d keep that, given that the adults around him all praise what’s growing on top of her head.  When Bobo’s mother, who seems to have a different boyfriend in the house each week, has a rowdy birthday party surrounded by good friends, the kid is convinced that she’s a bore and, later on, takes out his frustrations in a rollicking and coarse punk song about Brezhnev and Reagan.

It’s 1982.  Young moviegoers might be surprised to see everyone using a land phone, perhaps wondering just what that equipment held in the kids’ hands can do.  In a film devoted to female coming-of-age, a relative rarity when compared to aspects of male bonding, the forty-four year old Malmö-born director focuses on these kids who are considered freaks, partly because the punk era is dead, but apparently punk is alive until Bobo and Klara agree that it has passed away.  They get friendly with Hedvig (Liv LeMoyne), a classmate who is one year older, one who is arrow-straight but is shunned by her fellows because she is a classical guitarist, a talented one at that, and a pious Christian who wears a discreet crucifix about her neck.  Bob and Klara have two aims: one is to break into the punk music world though neither has talent or instruments, the other is to break Hedvig from what they consider her repressive religious belief.  To sum up: they are determined to be respected punk musicians when the fashion is dead or on the way out, using the style to express their hatred of sports and of the attitude of the masses who care more about what happens to the soccer ball than about nuclear proliferation and starvation in Africa.

Adults are hardly seen in the story, the parents involved in their own lives and the twenty-something men first belittling the aims of the three and then encouraging them to perform at a concert in a small city outside Stockholm.  The preponderance of journalists whose reviews are data-based on rotten tomatoes are ecstatic about the movie, stating such superlatives as “a joyous celebration,” “uniformly remarkable,” even “You’d have to have a heart of Arctic ice to finish the film not smiling.”  Well, get the defroster going: the performances of these kids who look about fourteen in real life are spot-on, making the movie worth seeing, but ultimately their characters are simply not interesting enough to rivet my attention. 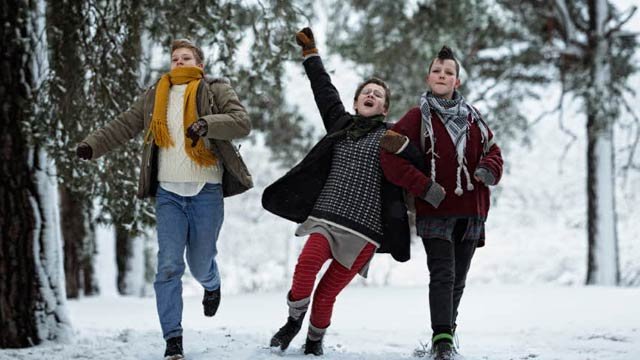