Title: As High As the Sky

A low-fi indie drama of sisterly reconnection that feels a bit like a cinematic cousin of early Miranda July, vacuumed free of any irony and collagist sensibilities, writer-director Nikki Braendlin’s “As High As the Sky” deserves credit for maximizing its resources and evoking a certain mood of hedged-in, wallflower protectionism — of tapping into the feeling of someone who’s withdrawn from life. In the end, though, it can’t overcome a general lack of gradation and the unconvincingly established deadpan affect of one of its central characters.

The film unfolds almost entirely in a mid-century Eichler modern home in Los Angeles, where neatnik events planner Maggie (Caroline Fogarty) is six weeks off a devastating break-up with her longtime boyfriend. When her sister Josephine (Bonnie McNeil), who is 13 years older, arrives unexpectedly for a visit with her pre-teen daughter Hannah (Laurel Porter) in tow, it throws Maggie’s well-ordered world into disarray. Stewing in the misanthropy of regular phone conversations with her two aunts (Dee Wallace and Jenny O’Hara, both unseen), who sort of echo “The Simpsons”‘ Patty and Selma Bouvier in this offering, Maggie has no idea how to relate to kids (her idea of connection is complimenting Hannah’s grammar), and her emotional relationship with her sister is barely any better. Josephine’s open-ended decampment eventually includes a couple days away, leaving Maggie time to get to know her niece.

From a practical and structural standpoint, Braendlin does a good job of not extending her story beyond her financial means. The contained setting and timeline provide ample opportuity for the contributions of cinematographer Tarin Anderson and composer Kristen Baum to shine; in its best moments, there’s a delicate, quaint charm to the movie.

But as both written and acted, Maggie is an ethereal, brittle creature who exists in an almost unknowable orbit. She exhibits trace elements of OCD, but this factor is never really fully plumbed so that it feels like it comes to mean something within the story. And when Maggie accepts advice on grieving from Hannah, filtered through a therapist the latter has been seeing about the loss of her dog, it feels like a too-clever work-around. In studio-executive-speak, these criticisms could be characterized as a lack of “inciting incidents,” and dramatic stakes. “As High As the Sky” has a twist up its sleeve, however — rooted in the reasons for Josephine reaching out and visiting Maggie first place. It’s just that either viewers’ antennas will be perked up far in advance of this revelation, or they’ll be left wanting a bit more push-and-pull, more toughly earned reconciliation, than Braendlin’s movie offers up.

Part of this, too, lies in the performances. McNeil is quite good as Josephine — she ably communicates the swallowed guilt that older siblings can often have about getting the “best” years of their parents, and then leaving their brother or sister behind. Fogarty, however, throws up a play-acted front that doesn’t invite a deeper sympathy from viewers. People who are hurt or depressed can be uncommunicative, it’s true, but they don’t do it in such a posed, demonstrative manner; their irritation finds cracks, and eventually seeps through. The end resting point at which “As High As the Sky” arrives is a heartfelt one. One merely wishes its path was a bit more deeply carved.

NOTE: In addition to its theatrical exhibitions, “As High As the Sky” is presently available on DVD, and will be available on Hulu, Amazon Instant and Cinema Libre on Demand beginning on June 6. For more information, visit the film’s website at www.AsHighAsTheSky.com. 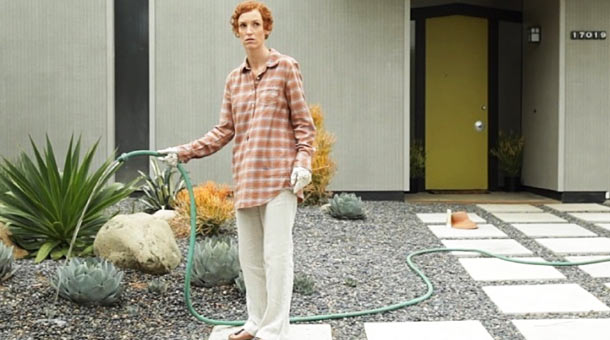