Directed by: Will Finn and Dan St. Pierre

Revisiting a magical place that holds enchanting memories of your childhood, and reminds you that you can overcome any struggle you put your mind to, holds an important and sentimental meaning for many people. Whether film audiences are cherisingly recalling happy childhood memories of watching the beloved classic ‘The Wizard of Oz,’ or relating to Dorothy’s determination to defeat evil and help those in need, the musical fantasy film often conjures sentimental memories for many people. These feelings are sure to be brought up once again in the movie’s new animated 3D spinoff, ‘Legends of Oz: Dorothy’s Return,’ from directors Will Finn and Dan St. Pierre. While the animated musical sets out to honor the characters and story of the classic 1939 film, and partially achieves that goal with its captivating visuals, the character development and story unfortunately stray too far from its predecessor.

‘Legends of Oz: Dorothy’s Return’ follows Dorothy (Lea Michele), who has only just returned home from her first journey to Oz. In a post-tornado Kansas, the young girl who saved the region of Oz after killing the Wicked Witch of the West must contend with possibly losing her home because of the damage sustained during the storm. While arguing with Aunt Em (Tacey Adams) and Uncle Henry (Michael Krawic) that they have to save the house, Dorothy is once again transported back to Oz through a rainbow mover sent by her old friends, the Scarecrow (Dan Aykroyd), the Lion (Jim Belushi) and the Tin Man (Kelsey Grammer).

Once she arrives back in Oz, where time has moved faster than in Kansas, Dorothy discovers the Jester (Martin Short0, the devious brother of the Wicked Witch of the West, is setting out to rule the land. He’s holding the leaders of each region, including Glinda (Bernadette Peters), captive, so they won’t battle his evil powers. Dorothy must travel to the Emerald City to reunite with her friends and defeat the Jester. But the yellow brick road isn’t as easy to follow this time, as the Jester plants detours to lead her astray. But she recruits help from several new friends, including the Owl Wiser (Oliver Platt), Marshal Mallow (Hugh Dancy), China Princess (Megan Hilty) and Tugg the tugboat (Patrick Stewart).

While Dorothy is grateful for her new friends’ support, she realizes that having them accompany her puts them all in grave danger. She has to decide whether to accept their assistance or forge the road alone. But with the future of Oz at stake, the group must muster all the heart, brains and courage they can in order to defeat the Jeester and bring order and happiness back to the Emerald City.

With ‘The Wizard of Oz’ being one of the most beloved and cherished films of all time, properly paying homage to the musical fantasy film while updating the sequel to appeal to a modern audience was a difficult task for Finn and St. Pierre. The directors needed to bring a uniqueness and element of surprise to both the beloved and new characters, as well as the new original songs and plotline, without sacrificing the elements that connected the follow-up to the classic Judy Garland movie.

While it’s logical the characters who appeared in the first film would naturally transform after the events that led to the death of the Wicked Witch of the West, they unfortunately became embellished caricatures of themselves in ‘Legends of Oz: Dorothy’s Return.’ While Garland portrayed the young farm girl as being humble and timid as she pursued the Wicked Witch of the West, Michele infused the title character with an unbelievable sense of confidence and strong invincibility that she supposedly gained while she visited Oz in her first fantasy.

After Dorothy defeated the witch, the Lion, Scarecrow and Tin Man all received their gifts from the Wizard, but they disappointingly didn’t know how to use their new found personality traits to their benefit. Screenwriters Adam Balsam and Randi Barnes created at-time bleak, inexpressive sidekicks who were willing to help Dorothy once again save Oz. They were so eager to trade humorless snipes at each other, they failed to use any of their championed brains, courage or heart to really empathize with Dorothy’s new journey.

While the family musical follow-up to ‘The Wizard of Oz’ unfortunately failed to capture the enchanting life lessons that were emphasized in the original film, the subtle and effective 3D animation did captivatingly draw in viewers’ attention. Art director Seth Engstrom, who was hired early in the filmmaking process, masterfully and creatively understood Finn and St. Pierre’s intended aesthetics for Oz. He effortlessly designed colorful, unique and vibrant regions of Oz, from Candy County and Dainty China County. The meticulous attention to detail Engstrom infused into each setting and scene, from the luscious chocolate soldiers, decadent cakes and tempting lollipops that tempt Dorothy and Wiser as they travel through Candy County, to the elegant and delicate designs of the China Princess and her subjects in Dainty China Country, visually drawn audiences into the young farm girl’s determined journey. Much like ‘The Wizard of Oz’ set visual standards in the late 1930s with its stunts, sets and costumes, ‘Legends of Oz: Dorothy’s Return’ grippingly and powerfully emphasized how important visuals are in telling a fantasy story whose plot is in part driven by its setting.

‘Legends of Oz: Dorothy’s Return’ is an eloquent follow-up attempt to the Academy Award-winning ‘The Wizard of Oz,’ it puts a modern spin and interpretation on what truly happened to Dorothy and the residents of Oz after she helped them during her first visit. While Finn and St. Pierre commendably tried to infuse the believed characters with new personality traits, such as a now fearless, tough and independent Dorothy who isn’t afraid to go after what she wants, a brainiac Scarecrow, a courageous Lion and an empathetic Tin Man, that weren’t present in director Victor Fleming’s beloved film. While the family musical follow-up to ‘The Wizard of Oz’ unfortunately failed to capture the enchanting life lessons that were emphasized in the original film, the creative animation Engstrom designed for each scene helps make viewers believe there are still some delightful joys in everyone’s life. 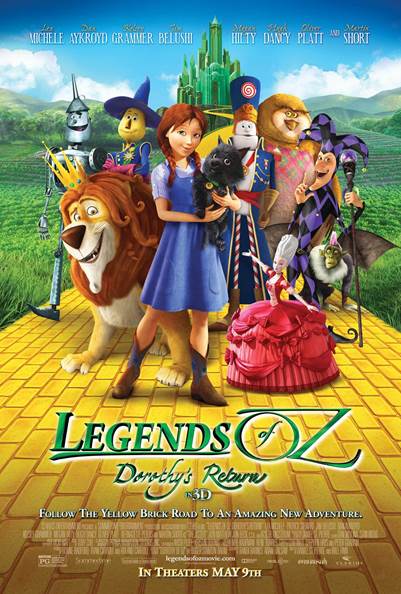