In Molly Green and James Leffler’s “Forev,” a comedic ode to the decidedly poor decision-making skills of twentysomethings, Sophie (“Saturday Night Live”‘s Noël Wells) impulsively accepts the marriage proposal of her apartment neighbor, Los Angeles tech support jockey Pete (Matt Mider), and the pair then promptly head off on a six-hour drive to pick up Pete’s sister Jess (Amanda Bauer) from college. Drinking and musing ensues, and when Jess, fresh off a break-up, indulges in a one-night stand, things get weird for all. For ShockYa, Brent Simon recently had a chance to speak to Mider, about the film, honing his improvisational skills, his favorite mock-curse word and making out with 60-year-olds in commercial auditions. The conversation is excerpted below:

ShockYa: “Forev” definitely gives off a “one-for-all-and-all-for-one” vibe, like the collaborators know each other. How did you first come to meet Molly and James?

Matt Mider: Molly and James and Noël and I all went to the University of Texas in Austin, and they had this program where you can intern in L.A. for a semester. And that’s how I met Molly and James — we did that at the same time. James and I tried to do some writing together a little bit, and shot a couple shorts. We were doing that, and then I moved back to Austin after that semester, because I had one more semester left at school. And then when I moved back I started working at a theater called Esther’s Follies, which is kind of like Austin’s version of Second City, or a sketch comedy place. And that’s where I met Noël — she was working there, and then we started pretty quickly thereafter making sketches and putting stuff on YouTube. And then I moved to Chicago for a bit, but when I made my way back out to L.A. then we all started hanging out out here.

ShockYa: You mentioned Austin, Chicago and of course Los Angeles — each great cities with their own subcultural pocket or vibe. What strikes you as the same or different about the comedic sensibilities of those cities?

MM: Oh man, that’s a good question. Austin definitely prides itself on being weird, a little more offbeat. So that’s what we were doing — what we put together was weird and unrefined. And then Chicago was cool, because while I was there I was just living and breathing improv. So you definitely feel that. And L.A. is L.A. — there’s definitely an underground comedy scene, which is very cool, but the mentality here, and this isn’t necessarily always a bad thing, is also a little bit more like, “Okay, what’s going to sell?” Obviously really great work still comes out of that mentality too, though. So I’d like to think (I was influenced by) all three of those.

ShockYa: You take an “additional screenplay material” credit on “Forev.” Did Molly and James come up with the infrastructure for the narrative, and then have you guys run rehearsals to come up with dialogue, or did you also share in developing entire scenes?

MM: Yeah, it was really cool. Basically Molly and James knew that I had that background and felt comfortable enough to create ideas or bullet points for scenes, and then come (to Noël and I) and say, “You can use some of this, but we also just want to see how your characters would behave in this scene.” So we’d just sit there and improvise our way through it. They took all the good bits from us and all the good stuff that they had already written, and combined it all together. It was a really cool, fun and collaborative process, and I think you get really natural performances that way.

ShockYa: The film captures how, in a certain period in your early 20s, you can trip headlong into certain things without really meaning to, and in the case of Sophie and Pete this impulsivity manifests in a quickie engagement. But… did that sort of loose, just go-with-the-flow vibe ring any bell or trigger any specific life memories for you?

MM: (laughs) No, I think absolutely — well, I’m weird, because I feel like I’m super ADD, so I take myself out of those situations in my real life, but on some micro-level I think everyone has experienced that, where you’re like, “Well, I guess this kind of works.” So I guess I’m eating my words, actually, because that happens all the time, where there’s something that, whether it’s good or bad, you just keep doing it.

ShockYa: There’s a road trip quality to this film as well. With all the moving you’ve done you must have made those drives. Did you have any notably weird cross-country drive experiences?

MM: I’ve definitely done those drives. Chicago to Los Angeles was one of those profound ones, because I was by myself and it was one of those new-chapter-type things, you know? I’d never experienced one solo before then, I’d always been on long drives with friends. When I was in college I also had the opportunity to live in Spain for a summer. I drove with some friends that I didn’t know very well — just some other kids in this program — we drove across the countryside for five days, which was a really cool experience. And one part that always sticks out with me is that then our rental car broke down, and we’d had wine with our after-meal and couldn’t speak Spanish very well, so we said, “Well, let’s just sit on the side of the road and drink more wine until we figure this out.” That was a very c’est-la-vie-type moment.

ShockYa: So now this is the lightning round, where I attempt to ask you some questions you probably haven’t been asked before. First, how can we possibly trust or identify with Pete when (for his first gift to Sophie he gives her one of) those terrible mesh trucker hats?

MM: (laughs) I mean… I mean, you just can’t. You just pretty much know then that it’s not going to work out for this guy — you look at him and say, “What a dipshit.”

ShockYa: Yeah, that to me was the greatest indictment of his character. Sophie also deploys the phrase “dickbag” a couple times, which is delightful. So do you have a similar go-to atypical curse word in your own offscreen life, or is it just all meat-and-potatoes profanity?

MM: Oh, man… (pause, laughs) Me and my friends used to call each other “squeezes.” I guess it initiated originally from “dick-squeeze,” and then it was shortened to just squeeze so I guess we could be not quite as vulgar in public. (laughs) I think dick-squeeze came from a character that one of my buddies was doing — just a douchey “bro” type guy.

ShockYa: I believe that Sophie’s hot dog audition scene in “Forev” is based on something that happened to Noël in real life. You’ve also been in a number of commercials — what’s the oddest commercial audition experience you’ve had in real life?

MM: I ended up booking this one, a Sonic commercial where an ice cream cone and an Oreo thing make out, and it’s supposed to be about an Oreo Blast or whatever, like, “They’re coming together!” So the gross and weird thing about an audition like that is that you have to actually kiss these people in the audition room. Both times … (laughs) well, the women (I was with) were like a lot older. I don’t know what they were going for, I guess they were trying a different angle. But the first time, the first round of that audition, I made out with this older woman who barely spoke English. Well, not a full-on make-out — I’ll retract. There was no tongue involved. But we’re pushing faces together. (laughs) It was literally a bunch of 20-year-olds, guys and girls, and then this like 60-year-old woman. This other dude was paired up with her, and I saw it on face his face — he was like “nope,” he walked up to the casting person and said, “I have this other audition, actually, I have to get out of here.” And I was kind of laughing inside, like, “Oh, that’s so funny — that dude just totally bailed because he didn’t want to make out with that woman.” And then the casting director was like, “Okay, Ming, you’re going to go with Matt.” And I was like, “What?” (laughs)

ShockYa: Well, your bravery impressed them, I guess. Wrapping up, what’s next for you?

MM: Yeah, my writing partner and I just finished a script, so we’re about to send that out. We’ll see what happens there, and then I’m also working on a cartoon right now — just doing some development stuff, and seeing what sticks.

NOTE: “Forev” is available on iTunes and all major cable VOD providers on May 15, and is available for DVD and Blu-ray pre-sale now. For more information, visit the film’s website at www.ForevMovie.com. 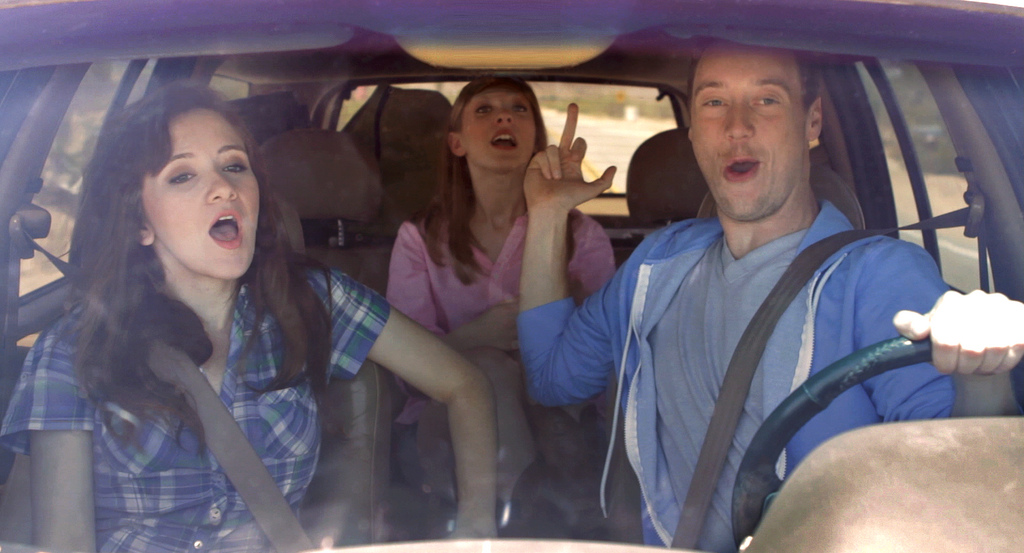