“Godzilla” is a little light on fully realized human characters, but what does that matter when you’ve got a 350-foot monster with an astonishing amount of fight and resolve to root for?

When a mine collapses in the Philippines, Dr. Ishiro Serizawa and Dr. Vivienne Graham (Ken Watanabe and Sally Hawkins) come to check out what’s left behind and are shocked to find the radioactive remains of something inexplicably large. Well north in Japan, they’re feeling the effects of whatever rattled that mine, but only in the form of small tremors so Joe Brody (Bryan Cranston) can’t get his colleagues at the Janjira Nuclear Power Plant to sound the alarms until its way too late. Fifteen years later, Joe is still obsessed with figuring out what leveled the plant while his son, Ford (Aaron Taylor-Johnson), does what he can to help him move on so he can finally leave the past behind and spend some time with his young grandson. However, Ford is forced to reconsider his father’s priorities when he comes face-to-face with the culprit Joe’s been chasing for years himself.

If you’ve seen “Monsters,” you know that Gareth Edwards knows how to make a monster movie, and on a minimal budget at that. Edwards undoubtedly had far more to work with with Warner Bros. backing his sophomore effort, but “Godzilla” still exhibits an exceptional attention to detail, suggesting Edwards rolled into this one with that same respect for stunning imagery, tangible performances and powerful story beats that he had when he was trying to do a lot, but with very little.

“Godzilla” is a gorgeous film. Whether it’s a close-up on Joe Brody in an interrogation room trying to prove his point or a sprawling wide shot in which Godzilla steps into frame and dwarfs a far smaller MUTO (Massive Unidentified Terrestrial Organism), Edwards always has something to say with each image of his film. It isn’t just about capturing the action or the performances; it’s about enhancing them, too.

Taylor-Johnson is meant to be our main man, but Cranston steals this film. Ford is underwritten to begin with, but Cranston’s work in “Godzilla” still continues to prove that he’s capable of making you believe just about anything, no matter what. Joe loves his son, but he’s so consumed by the destruction of the power plant and loss of his wife that he’s lost sight of everything else. He is manically determined to identify whatever is responsible and Cranston infuses every bit of Joe’s dialogue with such a fervent passion for that mission that it takes on a mesmerizing quality, making it impossible not to get on board.

Taylor-Johnson makes for a likable lead and delivers a fine performance as Ford, but when you’re going from a character who’s fueled by such an all-consuming amount of determination to one who is really just going where the wind takes him, it’s impossible not to question the source of Ford’s resolve. Taylor-Johnson’s biggest hurdle isn’t Ford himself, but rather his wife and son (Elizabeth Olsen and Carson Bolde).

When we meet Ford, he’s first coming home from a stint in the Navy as an officer with a specialty in disarming bombs. There’s no mention of the challenge to transition. Ford just hops off the plane, into their arms and acts as though they could live happily ever after without giving it a second thought. They’re so picture perfect that there’s nothing unique about the relationship. There’s no texture. It just is what it is so when Ford’s immediately called away to help his father in Japan, you don’t care that he’s being ripped away from his loved ones yet again because there’s nothing really there. That issue ripples throughout the film because while Ford is part of the mission to eradicate the world’s monster problem, his driving force is the need to get back to and create a safe world for his wife and son. The thing is, when you don’t believe in that relationship, you don’t believe in what he’s fighting for either.

Both Watanabe and Hawkins have potential at the start of the film, specifically pertaining to the conflict of interest that arises from being the people with the most thorough understanding of the creatures, but also being humane in their efforts and wanting to protect the innocent. The trouble is, roughly a third of the way through the film, all of that is lost and Serizawa is reduced to a prophetic one-liner here and there and Graham is almost entirely forgotten until the very end.

Ultimately, most of those issues fall to the wayside because once these main players lose steam, our title character takes over. Godzilla isn’t just the monster of the movie; he’s as much of a lead character as anyone. Edwards’ rendition of the iconic creature doesn’t just stomp around town doing whatever is necessary to justify CG-heavy action sequences. Every move Godzilla makes has a purpose and turns him into a character with something significant to fight for. Edwards knows precisely when to unleash Godzilla’s roar and deliver devastating blows to his enemies for the sake of a good thrill, but it’s the the time he takes to ensure the audience understands Godzilla and his motivations that will have you out of your seat and cheering at the screen. 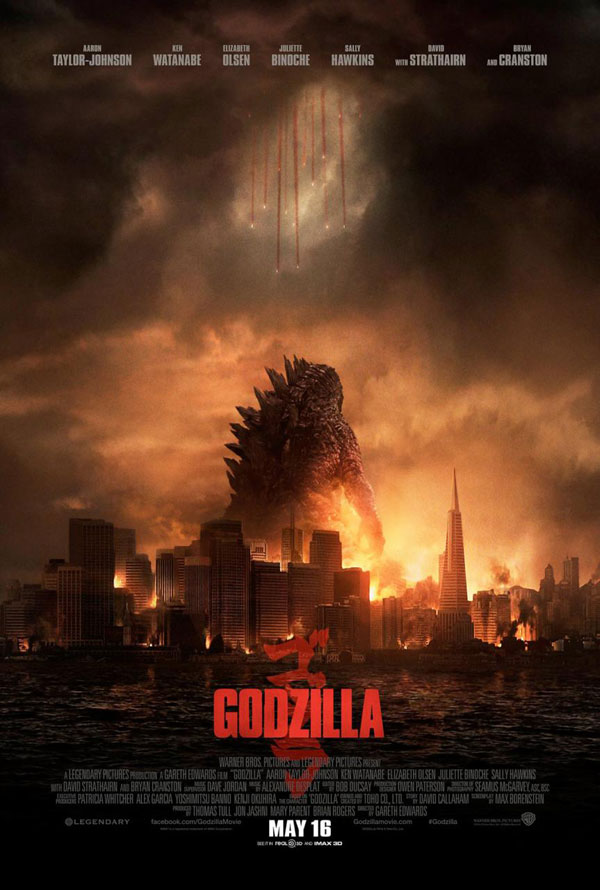