Celebrate the release of ‘The Fault In Our Stars’ with a special event presented by Twentieth Century Fox. The event, titled ‘The Night Before Our Stars,’ will feature an advanced screening of the drama, which will allow fans to be the first to see the movie. There will also be an exclusive live stream Q&A with actors Shailene Woodley, Ansel Elgort and Nat Wolff, as well as author John Green, director Joshua Boone and producer Wyck Godfrey.

‘The Night Before Our Stars’ will be held on June 5, the day before the drama’s released, at 8:30pm Eastern/5:30pm Pacific. Tickets for the event are now on sale at the film’s official website. Attendees will also receive a commemorative charm bracelet and an exclusive poster from the film.

The screenplay for ‘The Fault In Our Stars’ was penned by Scott Neustadter and Michael H. Weber. The story is based on Green book of the same name. The movie also features Laura Dern, Sam Trammell and Willem Dafoe.

Twentieth Century Fox has released the following synopsis for ‘The Fault In Our Stars’:

Hazel (Woodley) and Gus (Elgort) are two extraordinary teenagers who share an acerbic wit, a disdain for the conventional, and a love that sweeps them — and us – on an unforgettable journey. Their relationship is all the more miraculous, given that they met and fell in love at a cancer support group. ‘The Fault In Our Stars’ explores the funny, thrilling and tragic business of being alive and in love. 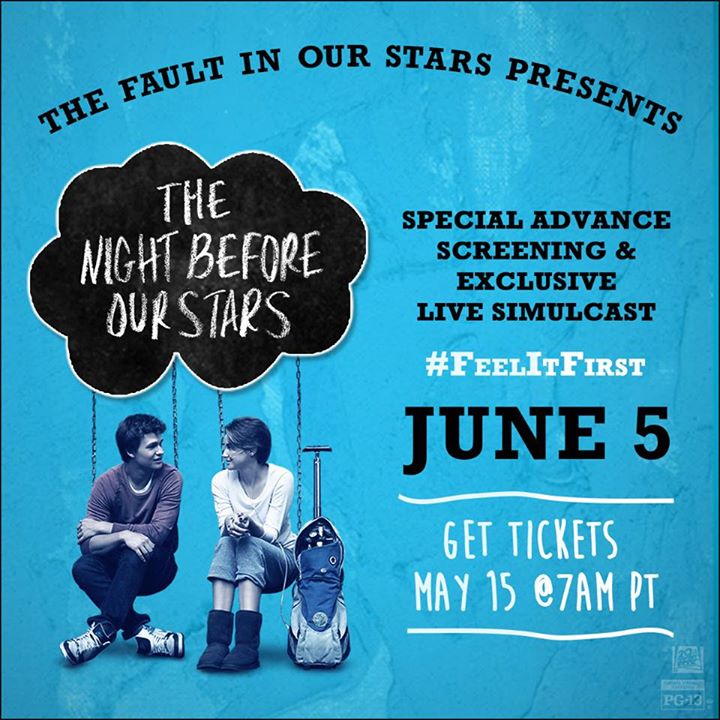