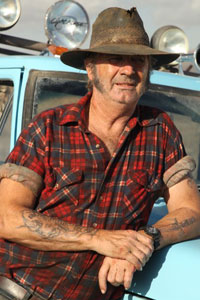 It’s been nearly ten years since we’ve seen Mick Taylor mutilate unsuspecting victims in “Wolf Creek,” but now he’s back and eager to torment a new crop of tourists.

This time around the narrative centers on Paul Hammersmith (Ryan Corr). While driving down a highway in South Australia, he unknowingly attempts to help one of Mick’s many victims and, as one might expect, Mick doesn’t appreciate it so makes Paul his next target. Paul’s a bright guy with a lot of resolve, but that might not be enough to outrun Mick and his enormous arsenal right in his own backyard.

With “Wolf Creek 2” making its US theatrical debut today, ShockYa had the pleasure of talking head-butting, spine-cutting and loads more with Mick Taylor himself, John Jarratt. Check out what Jarratt told us about getting “Wolf Creek 2” off the ground, the indelible impression he made on one fan, how much of the narrative really is “inspired by true events,” and more in the interview below.

What was it like from your perspective making the “Wolf Creek” sequel happen? The first film did well, but “Wolf Creek 2” is first arriving nearly ten years later. Had there been talk of making another all along?
John Jarratt: A couple of things. Number one, Greg [Mclean] was very determined to write a script that was better than the first one, or make a film that was better than the first one. The problem with sequels is they usually let people down, you know? So he worked very hard at that and then we had a bit of funding difficulties because this idiot put this money into the first attempt, pulled the plug on us and we had to reinvent ourselves and refinance. That’s what slowed it all down. It wasn’t that it was never gonna be made; it was just bad luck along the way.

How was it locking financing and then going into this with a bigger budget? I don’t know how accurate what I’ve read on the Internet is, but $1 million to $7 million is a nice step up, and quite the accomplishment.
Jarratt: Yeah, but the first film did extremely well so it’s got to franchise, if you like. It’s much easier to raise the dollars for the second one than it was for the first one. The first one was made for $1.2 [million], really. It should have been $3.5 [million], you know what I mean? We made that film on a wing and a prayer. No one got paid and all that rubbish, as it goes down when you’re trying to make a little independent film. It’s probably twice the budget when you think about it.

How about getting back into character? It’s been a while so did you have to do anything specific to get yourself back into that mindset?
Jarratt: Well, I was kind of connected to the character all those years for two reasons; one, Greg Mclean’s very inclusive and I worked very closely with him on the script so I never felt that far away from “Wolf Creek” in that regard. And secondly, I’m a household name in Australia. I walk the streets and people stop me and want to take an iPhone photo and they want me to do the laugh or the funny voice, so the Mick Taylor character’s never been far away.

Are you cool with that? Is it still exciting having people come up to you or have you had enough?
Jarratt: I wouldn’t call it exciting. It’s gratifying to know that what you’ve done has worked, but when you’re trying to get to a dental appointment and you got a toothache and someone wants to take your photo, it gets a bit annoying sometimes. But it’s part of what I’ve always done so I’m kind of used to it. In fact, I love coming to the States and walking around and not having people look at me. That’s quite different for me. [Laughs]

What’s the craziest fan interaction you’ve ever had?
Jarratt: I signed this girl’s arm at one of those Comic Con things and apparently she went straight to the tattooist and had my signature tattooed on her arm.

I know a lot of actors like to be able to connect with their character on some level. Do you find that tough to do here – if it’s even possible at all?
Jarratt: It’s one of the only times that I do go a bit method because the character is such an evil bastard and that’s a long way away from who I am, and to get into the skin of someone who is a serial killer is a strange place to go. It’s a bit schizophrenic. But I’m normally not a method actor. People say, ‘Are you a method actor?’ I say, ‘No, I’m a professional actor.’ [Laughs] But in this case I did have to suck eggs and do a little bit of method and try and stay in character.

How do you detox from something like that?
Jarratt: Very, very quickly. I take the clothes off, I have a severe haircut and a shave, and a really long shower, and then come out looking totally different.

How well do you know Mick? We get a clearer sense of how strongly he feels about his country and tourists here, but what about what drives him to hate like that and to kill?
Jarratt: Oh, it’s a really typical redneck attitude in every country. The good old boys in this country are not much better – I’m not calling them serial killers, but as far as racism is concerned and bigotry, and not having a lot of time for foreigners, it’s not a new thing – but killing them is going a bit too far. [Laughs]

This may sound silly, but what about what he does in his downtime? He can’t be hunting and killing 24/7, so what does Mick do to relax?
Jarratt: He lives down south, right? You get that in the opening sequence of “Wolf Creek 2.” They look at his license and say, ‘You’re from the south.’ So down south he’s a well known guy who does bits and pieces around town, likes to go to the pub and get drunk, have a few laughs. Everyone thinks he’s a happy-go-lucky, terrific, funny guy. ‘Aw, Mick’s down at the pub. Let’s all go down and have a drink with him,’ you know? If you take out the evil and the psychopath and the killing, he’s an affable, easygoing kind of guy. Every time they find some mad person like Mick Taylor, the neighbor always says, ‘But he was such a nice guy. He’s a good family man. We’re all really shocked!’

How is it playing a killer without a mask? Jason, Michael, Ghostface, they all earn their place, but there’s still something about seeing someone in a mask that makes them scary right off the bat. Do you think there are benefits to Mick just being Mick from start to finish?
Jarratt: Oh, well, wearing a mask is Halloween; it’s bogeyman time. It’s not real. And you’re hiding behind something; why? Can’t you cut it? I think the great scary characters don’t have masks. Hannibal Lectre, Robert DeNiro in “Cape Fear,” “Psycho,” there are so many really good villains that don’t wear masks and they’re scarier because they’re real and people say, ‘My god, this could be the guy next door.’

Are there any villains that really scare you anymore or does playing one yourself change how you respond to material like that?
Jarratt: I suppose maybe because I work in the business I don’t get freaked out by horror films or scary movies. To be honest, I don’t scare that easy. I don’t think I’d like to be eaten from the legs up by a great white shark or something. That would scare me, so probably “Jaws” is the scarier thing for me because being eaten alive is not a good way to go.

Can you tell me about some of the movie magic in “Wolf Creek 2?” Was there anything that looked totally ridiculous on set that looks like real violence and gore to us in the final cut?
Jarratt: There was one thing that happened. I head-butt the English guy, Paul, and we did the take and the guy didn’t pull his head back like he did in rehearsal. He left his head there and I actually head-butted him, so when you see the head-butt in the movie it’s actual and the sound that it makes is actual. [Laughs] And then when they said cut, I reached down and said, ‘Hey, mate, you okay?’ He said, ‘Yeah, I’ve got a headache, but how good is it?’

What about the correlation to real murders? I remember when the first film came out, there was a lot of talk about the movie being based on true events versus being inspired by true events.
Jarratt: It’s a great device that moviemakers use, you know? Based on true events. Because there’s, ‘Oh, it’s real,’ but it’s just a very, very well placed sentenced. I did a film 40 years ago called “Picnic at Hanging Rock.” It said based on true events and it was nothing like what actually happened. But, that was part of the intrigue and part of what got people to go to the cinema.

Is there any more truth to “Wolf Creek 2” than the first one?
Jarratt: Well, my character’s totally fictitious. The only thing that we do that the serial killers that he’s based on do is use a few of their techniques, like Ivan Milat who’s a famous serial killer in Australia used to sever spines, so we sever spines in this one. And another one called [Bradley John] Murdoch, [he] killed this backpacker and tied the girlfriend up and she got away, so we did that in this film, but that’s as close to what happened as we come.

Do you have other ideas brewing for the character? Is there more to Mick that could warrant a third film?
Jarratt: There’s definitely more because in the first one, I was only in 50% of the film. The film was about letting the monster out of the cage, but the monster is out of the cage so you get it from the get-go in “Wolf Creek 2” and it’s one hell of a rollercoaster ride from the start.

What about a prequel? I wouldn’t mind seeing Mick on the rise and becoming the guy we meet in the first film.
Jarratt: We haven’t thought of a prequel. We have thought of sequels, but prequels haven’t come to mind.