When Arthur Miller wrote “The Crucible,” he presented us with a crackerjack story of actual events: the Salem Witch trials in which a relatively small number of people were burned at the stake, some after being outed by children.  The play had no humor to speak of, it was deadly serious.  Miller was using “The Crucible” as a metaphor for the 1950s investigations of right-wing extremist Senator Joseph McCarthy, whose “witch hunt” claimed that there were 57 communists in the U.S. State Department.  As in the 17th century, no evidence turned up of any witches, or communists, in the State Department.

Witch hunts are alive and well in American politics, as witness the attempt by some off-the-wall Tea Party folks who claimed that President Obama was not born in the U.S.  And that’s just scratching the surface of medieval thought in America, which also claims that the earth is 7,000 years old, that people were born at the same time as dinosaurs, and, if you’re like eighty percent of your fellow Americans, you believe in the physical existence of angels.

So don’t laugh when you hear of a literal witch hunt in a corner of northern Spain just south of the French border where trials of the Inquisition were actually held, accusing people not of a lack of faith in Catholicism but indicting people for being witches.  In 1610, a declaration of auto-da-fé against thirty one people resulted in the burning to death of eleven, though to the credit of the Inquisitors, just as to the credit of the honorable judges of Salem, Massachusetts, a lack of evidence was declared and the trials came to an end.  Yet Zugarramuri remains a tourist attraction, a town of 243 people who, on the day of the summer solstice each June light fires next to the cave of the witches.

What is remembered as tragedy by Spaniards—who choose to remember the 17th century events at all—is celebrated as comedy by the movie “Witching & Bitching,” a most unfortunate title that cheapens an already gross horror-comedy tale.  Would it be a problem to call it “The Witches of Zugarramurdi,” a direct translation of the Spanish title?  “Witching” is likely to be the most chaotic feature you’ll see this year, one that stars with a fast-moving robbery and whose pace never lets up.  Once you become enveloped in the action, don’t be surprised if you’re able to suspend disbelief for the 110 minutes of the story and to believe that at least in this one, isolated town in the world, there indeed exists a coven of witches.

In this tale, director Álex de la Iglesia, whose 1995 feature “The Day of the Beast” would have us believe that the anti-Christ would be born in Madrid on Christmas Day, is in his métier.  After a daring robbery of gold rings from a Madrid pawn shop involving the robbers dressed at first as Jesus Christ, Mickey and Minnie Mouse, SpongeBob SquarePants and a stationary soldier, invade the store, make off with the loot, and during the chase—which includes the 10-year-old son of “Jesus” who has joined his divorced father by holding two revolvers—the comic lines begin.  You might think that the perps would be talking about the heist, but instead José (Hugo Silva), the titular leader of the caper, laments how his ex is draining his money with alimony and denying the kinds of visitation rights with the boy that he would prefer.

As they head for the border with France, they enter the village of Zugarramurdi, a fearful land that taxis refuse to enter, but with cops chasing you, you’ve got to run. Soon they’re enveloped by a group of fun-loving, mostly female witches led by Graciana Barrenetxea (Carmen Maura—yes, you heard that right, the great Carmen Maura who had top billing in Pedro Almadóvar’s “Volver), who is out with her gang to destroy Western Civilization.  She has it in for men, who, she believes, are threatened by the news that God is a woman. “That just drives them crazy.”  With her nutty band of crazed pseudo-feminists, including pretty Eva (Carolina Bang) who uses her wiles to trap the robbers, she plans to destroy her new captives to strike the first blow against the world.

You may wind up with a headache about one hour into the movie, but that’s a compliment.  The action is so frenetic that if you don’t know Spanish but depend on the titles, you’d better be a fast reader.  Ultimately the chaos becomes so frantic that the picture begins to lose steam, but cut the proceedings by fifteen minutes and you have an entertaining look at the battle between flawed humans and fun-loving witches with Carmen Maura in her most over-the-top performance and Hugo Silva as her handsome nemesis who must fight off not only the witches but also his own ex-wife for custody of the ten-year-old Sergio played winningly by Gabriel Ángel Delgado.

Call the picture what you will but I dare you to call it dull. 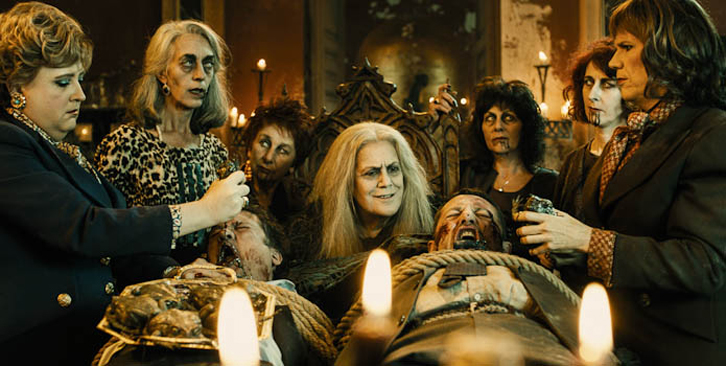