Interview: David Michôd On His Animal Kingdom Follow-Up, The Rover 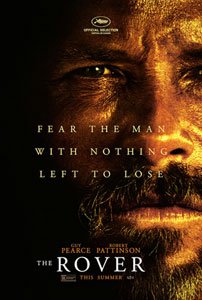 Four years after delivering the film that would ultimately go on to earn Jacki Weaver her very first Academy Award nomination, writer-director David Michôd is back with his second feature film, “The Rover.”

The film stars “Animal Kingdom” alum Guy Pearce as Eric, a loner roaming the desolate Australian outback where law enforcement is hard to come by and everything comes at a hefty price. When a group of criminals steals Eric’s car in the heat of a botched heist, he decides to pick up the wounded accomplice (Robert Pattinson) they leave behind so he track them down and get back his sole remaining possession.

When you mark your feature debut with something like “Animal Kingdom,” follow-up opportunities are bound to come your way. However, an opportunity and the right opportunity are two different things, so Michôd opted to take his time to ensure he picked the best thing.

“There’s my life before ‘Animal Kingdom’ and my life after it and they’re two totally different things. I think one of the reasons why it took me like four years or whatever is was to get this movie made was, I feel like I spent the first two years after ‘Animal Kingdom’ was released just working out what the hell my life even looked like, you know? I mean, I went from having no options, other than the options that I generated for myself, to having a whole lot that was being thrown at me.”

Ultimately Michôd chose to move forward with his own script, one that didn’t seem like much on the surface, but had so much more to it underneath.

“I remember before I made it and people asked me what I was doing and said, ‘What’s it about?’ And I’d go, ‘Look, it’s actually kind of like a really sort of dirty, violent, near future western about a guy who gets his car stolen and spends the entire movie trying to get it back,’ saying that facetiously knowing that actually, for me, there’s so much subtext bubbling underneath it.”

“On this one, I’m contending with a thing I’ve never had to contend with before, which is other people’s expectations, you know? And I’m realizing that I can’t control them and so I just have to let it go … I watched ‘The Rover’ in Cannes. We finished it in November last year, so this was the first time I’d seen it in about four or five months and I really enjoyed watching it, which is an unusual experience when I’m watching something that I’ve made.”

You can check out the rest of our conversation with Michôd in the video interview below and also catch “The Rover” in full when it arrives in select theaters this weekend followed by its wide expansion on June 20th.