Title: How to Train Your Dragon 2

“How to Train Your Dragon 2” is kind of like going to a pet store and being swarmed by puppies; you won’t want to leave and when you have to, you’ll want to take them all home with you.

It’s been five years since Hiccup (Jay Baruchel) met Toothless and changed the way the people of Berk viewed dragons. Now, just about everyone has one, even Hiccup’s father, Stoick (Gerard Butler). When a notorious dragon hunter named Drago (Djimon Hounsou) threatens to steal Berk’s dragons, Stoick insists there’s nothing they can do about it, but lay low and keep out of his way. Hiccup, on the other hand, is convinced that reasoning with him could make a difference, so he flies out to do what he thinks is best in an effort to keep the dragons and his village safe.

It’s been over four years since the first “How to Train Your Dragon,” but it’s effortless to fall right back in step with Hiccup, Toothless and the rest of the gang. Any pet owner could relate to Hiccup and Toothless’ connection in the first film and this time around we’ve got an entire village full of people with man’s best friend-type relationships with dragons. There’s dragon racing, a cat lady-like character covered in baby dragons and an abundance of unconditional love all over the place. Within minutes, “How to Train Your Dragon 2” sells Berk as a village well worth saving, almost instantly making you invested in the mission to protect it from Drago and his crew.

Writer-director Dean DeBlois really takes the five-year break seriously. Berk is different and so is everyone in it. Hiccup has grown up. You can see it in his more mature look and his attitude, too. He’s still fun-loving and quirky, but this time, he’s got a lot more responsibility to deal with. He still loves to ditch the village to work on his inventions, but, at the same time, he’s well aware of the fact that he won’t be able to keep that up for much longer. He’s struggling to figure out how to balance what he wants with what he knows is right, and that’s a highly relatable effort you can easily get behind.

What makes Hiccup’s pursuit especially engaging is the multitude of challenges he’s got to work through to achieve it. Some components work better than others, specifically the pressure that comes from the expectation that Hiccup will eventually take over for his father as chief of the tribe, but they’re all so well woven into the main mission that they turn the film into a more robust experience, and add many more layers to Hiccup in the process.

The one completely disposable element of the story is a rather big one, Hiccup’s mother, Valka (Cate Blanchett). The folks on Berk think they’re the only ones riding dragons, so the idea that there’s a lone mystery rider out there is interesting, but as soon as that mystery rider is unmasked, her storyline falls flat. Minus her vibrant dragon-riding outfit, there isn’t all that much to Valka beyond the fact that she ditched her family to live among dragons. Even though she apologies to Hiccup and Stoick for leaving, it’s tough to forgive her when returning to Berk via dragon flight could have been so easy and it’s especially mindboggling that neither Hiccup nor Stoick even give that a second thought. Had Valka gone on to serve a bigger purpose or had some sort of unique appeal, it would have been easier to overlook the transgression and give her a shot, but in the grand scheme of things, all she does is give us access to the ice cave full of dragons and there are so many other ways Hiccup could have stumbled upon it without her being part of the process.

Drago also makes for a rather bland, uninteresting villain. The movie does run through his backstory, but there really isn’t anything profound about it. He’s just a big dude with a bad attitude who wants all the dragons for himself, and not for a very compelling reason at that. Similar to Valka, he really only serves one purpose, to bring in this enormous alpha dragon, and again, there could have been more interesting ways to achieve that without him.

While Hiccup is a very successful main character, the stars of this franchise are definitely the dragons. Every time Toothless’ eyes go wide, he rolls over for a belly rub or gets playful with another dragon, you’ll melt. And this time around, he’s not the only dragon who has that effect. Astrid’s dragon, Stormfly, and Valka’s Cloudjumper are both standouts. Stoick’s Skullcrusher also gets an extremely satisfying payoff that’ll undoubtedly warm your heart right up.

“How to Train Your Dragon 2” has absolutely no problem getting around those underdeveloped characters and storylines because it’s such a joy to spend time with Hiccup and the dragons that you genuinely won’t want to leave Berk behind. If you don’t have a pet, you’ll walk away wanting one and if you already do, after 102 minutes with Toothless, you’ll want to cuddle him/her/them to no end. 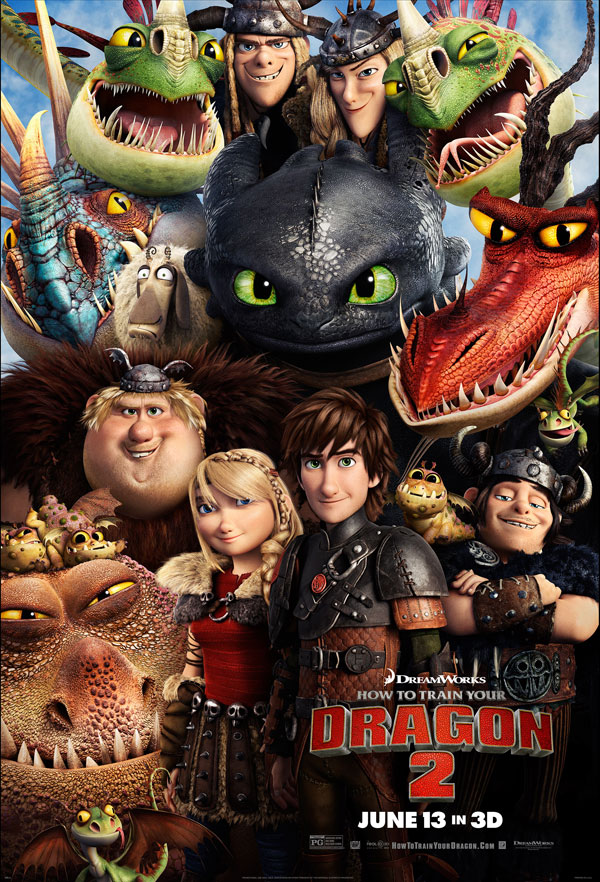 Cancel reply
Lionsgate Entices Audiences to Become Addicted with New Film Poster
The Purge: Anarchy Gives You A Chance To Breakout
To Top