The three major female characters in Third Person do not get a fair treatment in a screenplay written and directed by Paul Haggis.

Anna (Olivia Wilde) a writer-journalist displays a strange taste in sexual partners. Her first boyfriend is thirty years her senior, though he gives a good sexual performance in bed. Her second boyfriend is even older and acts as “protector” of sorts.

Julia (Mila Kunis), an ex-soap opera actress, is caught in a custody battle over her young son. Her financial support is cut off, her legal expenses are mounting, thus forcing her to take a maid’s job in a New York City Hotel. Though Julia can cry on cue, this will not save her in the custodial war department.

Monica (Moran Atias) fairs the worst. She is a Roma person whose daughter will be sold to prostitution unless she pays a hefty fee to the smugglers. Acting in a hyper mode during her entire screen time this gypsy is one crazy gal.

The male characters do not fare any better.

Scott (Adrien Brody) is an American “businessman” who steels fashion designs. He hates Italian food, and thus finds himself in Bar Americano in Rome, in search for a beer and burger. Scott’s knowledge of the Italian language is so lacking that he uses the word “spasibo” (thank you in Russian) to thank an Italian bar tender in Rome.

Rick (James Franco) is a successful New York artist, who likes to be in control, even if it means denying his son the opportunity to interact with his birth-mother Julia (Mila Kunis).

Michael (Liam Neeson) is a Pulitzer Prize winning author whose imagination has dried up. His ex-wife Elaine (Kim Basinger) sums it up in a few words: “you can’t feel a thing, can you?”

This romantic melodrama takes place in Paris, New York and Rome, but was shot on sets that were built in Cinecitta Studios in Rome. Some of the exterior Paris scenes were shot on the Via Veneto in Rome.

Third Person runs out its welcome by forty-six minutes, but a first-rate cast makes the plot watchable. 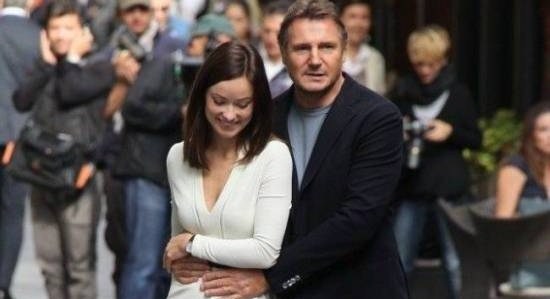