The Irish-indie movie and TV writer/director had bewitched audiences with ‘Once’ in 2007, a touching musical shot for only €130.000, that won Academy Award for Best Original Song with ‘Falling Slowly.’

Now, John Carney is back with an enchanting musical tale, set in New York City, the place where the arts and the accounts related to them are enhanced by the magical atmosphere of the Big Apple.

‘Begin Again’ uses music to start over. No Rewind or FastForward. The moment in your life when you press Stop and pick a new track to Play comes for all; and this is exactly what happens in this film. Two lost souls are drawn together by their shared love of music.

Gretta (Keira Knightley) and her long-time boyfriend Dave (Adam Levine) are college sweethearts and songwriting partners who decamp for New York when he lands a deal with a major label. But the trappings of his new-found fame soon tempt Dave to stray, and a reeling, lovelorn Gretta is left on her own. Her world takes a turn for the better when Dan (Mark Ruffalo), a disgraced record-label executive, stumbles upon her performing on an East Village stage and is immediately captivated by her raw talent. From this chance encounter emerges an enchanting portrait of a mutually transformative collaboration, set to the soundtrack of a summer in New York City.

Keira Knightley unveils a nightingale voice and she seems to be more apt in   performing truthfully with contemporary tomboyish clothes, than in the period-time set costumes we were so accustomed to see her wear. She is natural, loveable, not at all coquettish. The chemistry with Mark Ruffalo, who is still enthralled by Catherine Keener’s character, works very well. Just as all the rest of the cast, who plays undertone but with efficacy. Music is the protagonist that leads the way. Our mood, just as in real life, is effected by what we hear. As a matter of fact a phrase that Dan says is emblematic: music can give importance to an incredibly banal scene. Music has the power to give meaning to details. This is what makes ‘Begin Again’ so touching and alluring.

This soul-stirring comedy is a symphony on the disharmonic human condition, and John Carney “once” again proved to be a great orchestrator in solfèging the pace of the story and arpeggiating the actors’ performance. 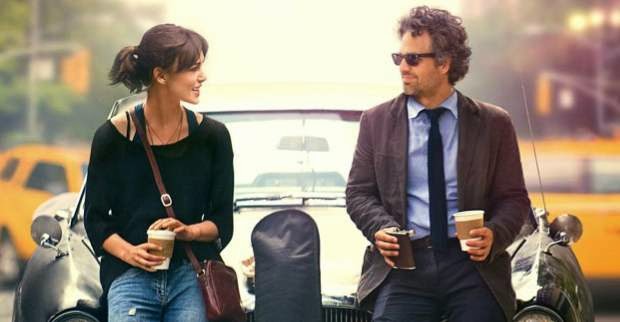