If you wonder why the 1950s are considered the most boring decade in U.S. history, you need only look for some videos of NBC’s show “Your Hit Parade.”  The Saturday night festivities featured the top seven hit tunes, playing number one on the charts last, holding TV viewers in suspense. The trouble is that was nary a hit that was not some white bread ballad with lyrics like “Because of you, there’s a song in my heart/ Because of you, my romance had its start…”  And it featured singers with names like Snooky Lanson.  How far would a name like that get today, and how far would these mushy ballads get now?  In fact, the ‘50’s music scene was taken over in the succeeding decade by rock and roll, which begat folk, which begat rock, and then its variations e.g. punk-rock.  Ethnicity was important in the sixties music scene, the style of singing perhaps best exemplified by the mostly Italian-American group The Four Seasons.  In an elaborate trip down memory lane, the Tony-award winning “Jersey Boys” is still playing at the August Wilson Theatre on W. 52 Street, but if you don’t feel like paying $120 for a good seat, you can see an opened-up version on the big screen as of June 20 for about one-tenth the price.  The Broadway casts are here, the backstory is more carefully examined without the limitations of the stage, and for special theatrical effect, the fourth wall is occasionally breached as first one, then other principal actors talk directly to the audience.

“Jersey Boys” is a treat. Perhaps under Clint Eastwood’s direction, the one-liners and back-and-forth kidding are not as snappy as they are on the stage, but when this movie version turns to an all-out musical before the first half is over, this is as good as it gets for Broadway-in-Hollywood this year so far.

What lifted The Four Seasons above the generic fifties singing is the special, stylized voice of Frankie Valli, here played by John Lloyd Young.  Some would consider this a feminization, but whatever it is, it is distinct, putting Frankie in the position of lead singer in a group that includes its manager, Tommy DeVito (Vincent Piazza), Nick Massi (Michael Lomenda), Bob Gaudio (Erich Bergen).

Marshall Brickman and Rick Elise’s screenplay takes us to Frankie Valli at age sixteen where he is a barber-in-training, here giving mobster friend Gyp DeCarlo (Christopher Walken) a shave.  Frankie, known at the time by his real name Frankie Castelluccio, serves as a lookout for a heist under the direction of Tommy, who gets six months in jail for his troubles.  The group meets songwriter Bob Gaudio (Erich Bergen), testing their distinct voices during the first part of the movie led by Gaudio at the piano playing “Cry for Me.”  After being rejected by a number of producers in midtown’s famous Brill Building, they pick up kudos from Bob Crewe (Mike Doyle), who guides them with their new songs to the tops.

The Four Seasons sum up in micro the history of major song groups: their shaky origins, their gradual rise, their almost inevitable fights and breakups.  Nor could marriages be expected to last.  Valli’s first wife Mary (Renée Marino) delivers one-note, drunken invectives to the man she accuses of being simply not there for their daughters.  With all this emotional baggage, we wonder that Valli can continue delivering his falsetto voice in crowd favorites like “Sherry,” “Big Girls Don’t Cry,” and “Walk Like a Man.”

The group were inducted into the Rock and Roll Hall of Fame in 1990, having sold 100 million records. 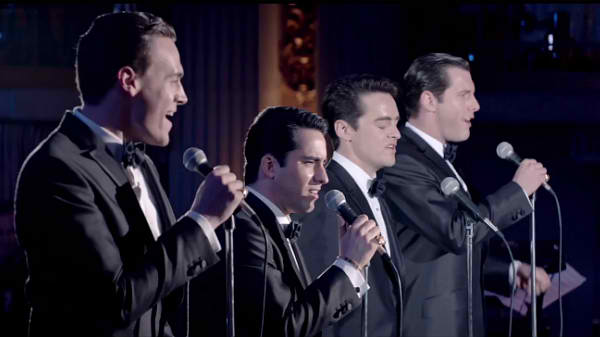