“Coherence” focuses on Em (Emily), Kevin (Maury Sterling), Mike (Nicholas Brendon), Lee (Lorene Scafaria), Beth (Elizabeth Gracen), Hugh (Hugo Armstrong), Amir (Alex Manugian) and Laurie (Lauren Maher), a group of friends reuniting for a dinner party. It’s all small talk and a little bit of gossip until the lights go out. Power goes out all the time for various reasons, but the strange thing is, the entire neighborhood is without electricity except for just one house about two blocks away. Does this have anything to do with Miller’s comet, which is passing Earth at this very moment? No one knows, but Hugh’s brother might so Hugh and Amir make their way over to get some answers, but their visit only winds up sparking more questions.

The best way to walk into James Ward Byrkit’s first feature is knowing nothing about what you’re getting yourself into, so this assessment of “Coherence” will remain rather vague.

“Coherence” essentially takes place in one location with just eight main players yet Byrkit still manages to make each and every scene feel fresh and engaging while also upping the narrative’s forward momentum. The core concept of the film is pure gold, but it’s the way Byrkit introduces it and then how he so deftly manipulates all of the elements within it that turns the idea into something rousing and unforgettable.

Even though the first act of the film is loaded with exposition, it’s all delivered in a very natural manner. For example, about five minutes in, Em, Mike, Beth and Lee have a conversation explaining who Laurie is. However, this isn’t a moment that’s just shoved in there to deliver necessary information; it’s what one might expect to happen given the circumstances of the situation. Em is with Kevin, but Kevin used to date Laurie and now she’s coming to dinner, so of course their history is going to be a topic of conversation. And Amir winds up coming into focus in the process, too, because he’s the one bringing Laurie to dinner and that right there says quite a bit about him.

This character development doesn’t stop after the cooking and dinnertime chatter. Even when things get a little crazy and the main players become wrapped up in the mystery, everything they say and do tells us a little more about who they are and also justifies their next move. At one point, Em is asked to cut up an old photo of her and Kevin and what she chooses to do touches on where they once were, how she’s feeling about the relationship now and what might happen to it in the future.

“Coherence” is much more so about the mystery than the characters, but there’s really nothing wrong with that because Byrkit earns it right from the start. He kicks things off with some light, friendly conversation and unassuming talk about the comet so when the lights go out, you don’t expect it whatsoever, letting the moment have a great jump scare-like effect. But then, once you recover from the jolt, you start to think, and because he plants the seed early on, your mind immediately goes to the comet. By letting the viewer be the one to connect the dots, the idea that the comet could have an out-of-this-world effect on those below becomes eerily plausible.

For much of the film, “Coherence” rocks a haunted house-like quality. You’re always revved up and ready to find a way out, but there’s still no way you’re making a sharp turn without peeking at what’s around the corner first. This isn’t a haunted house movie by any means, but its astonishing ability to keep you on your toes while maintaining this all-consuming sense of unease is very reminiscent of blindly searching through the unknown in an environment where anything can happen.

“Coherence” is unpredictable from beginning to end. Some of the details are a little difficult to track and there’s probably loads of information that’ll only come to light after multiple viewings, but even if you only put a fraction of the pieces together during round one, the experience is still fresh, clever and immensely satisfying. 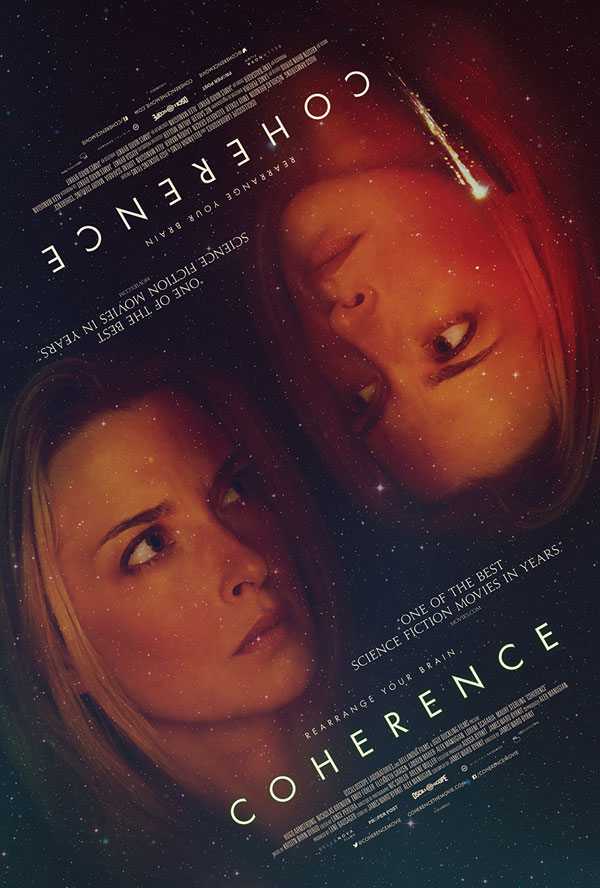