“Earth to Echo” doesn’t come close to being the next “E.T.,” but it does pack enough spirit and fun to make it a worthwhile knockoff.

Teo Halm, Brian “Astro” Bradley (yes, the kid from “The X Factor”) and Reese Hartwig lead as Alex, Tuck and Munch, three best friends who never really fit in until they found each other. However, with plans to build a highway straight through their Nevada suburb, their families are left with no choice, but to pack up and move away. In an effort to make their very last night together one to remember, Tuck insists they ride their bikes to the middle of the desert to investigate a mysterious signal that pops up on their cellphones.

Elements of that premise are in line with “The Goonies,” but there aren’t many similarities beyond that primarily because “Earth to Echo” is a far more juvenile film. It’s got heart, intrigue and a mild amount of suspense, but a lighter tone that will make older moviegoers well aware of the fact that nothing bad can happen to these characters. However, “Earth to Echo” gets away with it because the film is much more so about experiencing this crazy adventure than it is about the characters.

Tuck is the gung-ho leader, Munch is the über dork and Alex is the more pensive of the bunch. All three young stars are guilty of taking their stereotypes a bit too far, but for the most part, they’ve got this quirky, fun-loving vibe that’s tough not to fall for. They serve the core concept well and ensure you’re entertained and engaged all the way through, but because the boys don’t experience much growth of their own, “Earth to Echo” is more of a fleeting thrill and is less likely to stick with you.

Director Dave Green and writer Henry Gayden do try to give the characters a little depth by using the task at hand to highlight issues within their friendship; there just aren’t enough of them to establish full-blown character arcs. For example, there’s a moment when Tuck, Munch and Alex sneak into a building, a security guard spots them, everyone runs, just one of the boys gets caught and the other two leave him hanging. They’re constantly professing their loyalty to each other, but in the heat of the moment, the fear of getting in trouble stops them from standing by his side. It’s a compelling, highly relatable scenario that plays well. It’s just unfortunate there aren’t more moments like that in the rest of the film.

Tuck, Alex and Munch are really just there to support what drives the film anyway – their adventure. The signal on their phones leads them straight to this adorable robotic little alien who’s stranded on Earth. In order to help him get home, the boys have to go around town and collect what he needs to get his ship back in working order. That’s really all there is to it, but this creature’s cute factor is absolutely through the roof so the instant he pops up, scared and alone, you immediately start rooting for the boys to get the job done. They only have to follow the map, get to the spot and then Echo does the rest himself with little to no resistance. It gets repetitive and isn’t extremely riveting, but there’s enough individual flair to the locations and silly banter to make each sequence fun and memorable to a degree.

It also helps that “Earth to Echo” clocks in at about an hour and a half long. It’s a fine film and certainly not one that’ll have you checking your watch, but the shorter run time does suit what the film is – a fun, family friendly romp. Perhaps additional layers could have made “Earth to Echo” a more robust experience, but there is a chance added depth could have ruined the buoyancy of the film in the process.

This is a strong first feature for Green. He doesn’t do anything particularly mind-blowing with the POV shooting technique, but he does strike a nice balance between making it feel as though there’s a kid behind the lens and also maintaining enough control to ensure that pivotal plot points never get lost in the mix and that you’re always geographically oriented. He also absolutely nails the combination of live-action and digital components. It’s an out-of-this-world scenario, but you believe it because Green makes Echo and his abilities look so real within it.

“Earth to Echo” is actually fairly grounded overall. It’s what one might expect kids to do if they found an alien, and especially one as cute as Echo. The movie doesn’t dig particularly deep into that scenario, but it fills the void with three lively leads, one lovable little alien and some particularly cinematic ET abilities that make the film a simple, fun watch from start to finish. 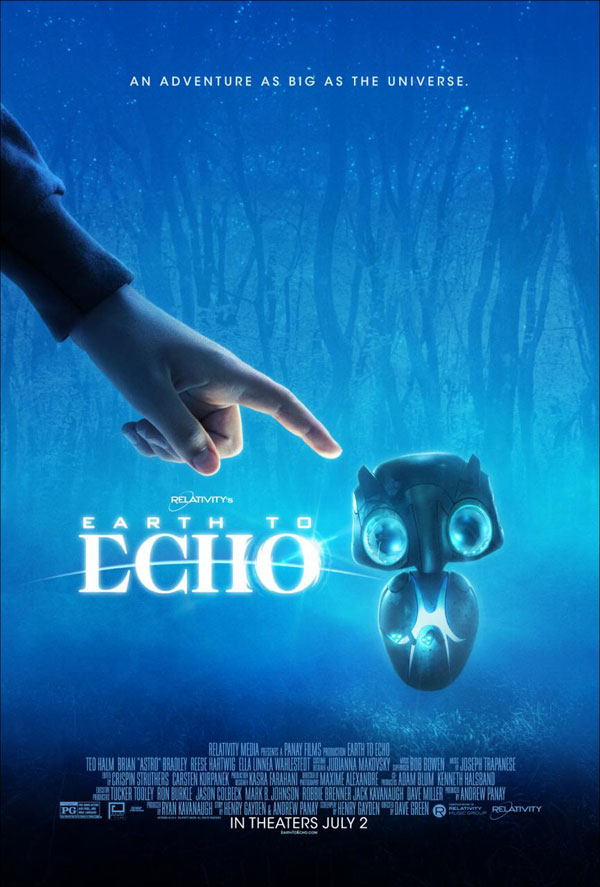