“Cesar Chavez,” the biopic that tells the story of the American activist who fought for reform, is coming to Blu-ray plus Digital HD Ultraviolet and DVD plus Digital Ultraviolet, and Pay-Per-View July 22 from Lionsgate Home Entertainment. The film is now available on Digital HD and Video on Demand.

We have an exclusive clip from the film. The clip is from a behind-the-scenes featurette and includes commentary from stars Diego Luna and Rosario Dawson concerning the importance of the characters and what Dawson and America Ferrera brought to the film. check out the clip below the post.

“Cesar Chavez” will be available for $19.99 (Blu-ray) and $19.98 (DVD) respectively. The Blu-ray will include a special documentary focusing on the making of the film. The film, which also stars Michael Peña, Jacob Vargas, Yancey Arias, Wes Bentley, John Ortiz and John Malkovich, tells the remarkable story of Chavez’s fight for reform.

“From Pantelion Films, the studio behind the blockbuster crossover hit Instructions Not Included, and directed by Diego Luna (Abel) from a screenplay by Keir Pearson and Timothy J. Sexton and story by Keir Pearson, Cesar Chavez tells the story of a man who inspired millions of Americans from all walks of life to fight for social justice. His triumphant journey began in Delano, California, and led him across the United States and to Europe where he tirelessly fought for reform. Cesar Chavez chronicles this incredible story and is a remarkable testament to the power of one individual’s ability to change the world.” 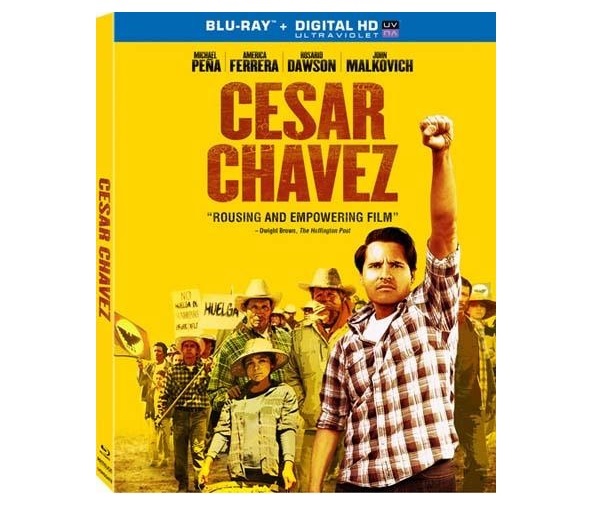