We all know that Halloween is Oct. 31, but this year, you’ll celebrate Halloween early. How early? Try Sept. 23. That’s the day the “Halloween Complete Collection” Blu-ray set will be available for Michael Myers fans everywhere!

With so many films chronicling the heinous activities of Michael Myers, there has to be something big to celebrate, right? That big event happened at this past Comic-Con, in which there wasn’t just one, but many Michael Myers (and a witch) giving Comic-Con crowds a show.

Actor/Choreographer Hector S. Quintana choreographed several volunteers for a big “Halloween”-themed flash mob. Rather than having me describe the flash mob performance for you, how about you just watch it below the post. The one thing I’ll say is that Eminem and Rihanna are indirectly involved, so if you’re a “Halloween” purist and don’t like to see Michael Myers having fun, consider this a fair warning before you click the play button.

What do you think about the upcoming “Halloween” blu-ray set? It’ll certainly be a great way to ring in the horror/thriller time of year, but how much do you think the set will flesh out our horror film collection? And will you do the Michael Myers Slide at your next party? Write about all things “Halloween” in the comments section. 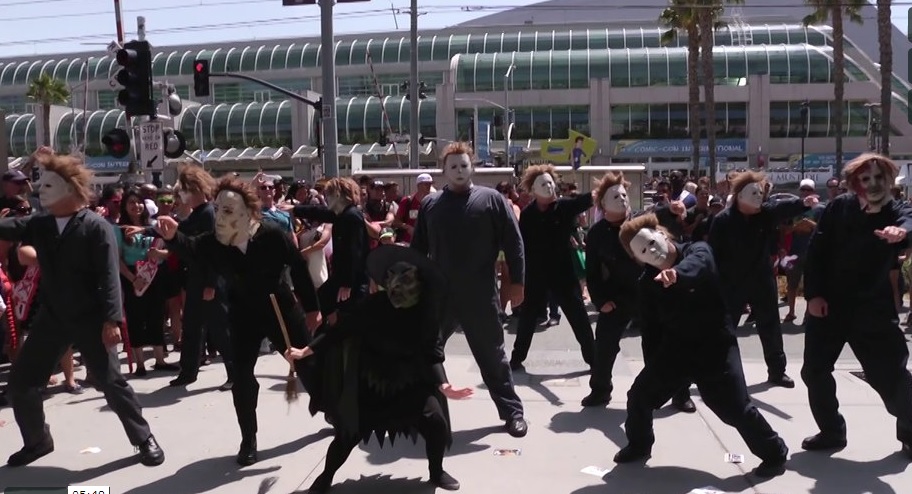