Recognizing your origins and remaining in touch with where you came from as you set out to embrace new experiences can be a challenging, yet rewarding, situation for many people. Not only did screenwriter Steven Knight recognize and appreciate the characters’ love of cooking and food from writer Richard C. Morais’ book in his film adaptation of ‘The Hundred-Foot Journey,’ the chefs in the movie also powerfully came to realize that accepting your competition is part of the way to achieve success.

‘The Hundred-Foot Journey,’ which was directed by Lasse Hallstrom, follows Hassan Kadam (Manish Dayal), a culinary genius with aspirations to become a chef. After the family is displaced from their native India, their widowed father, Papa (Om Puri), settles in the quaint village of Aint-Antonin-Noble-Val in the south of France. Not only is the town filled with charm, it’s picturesque and elegant, which Papa finds to be the perfect place to settle down and open an Indian restaurant, Maison Mumbai.

But the spontaneous idea worries Madame Mallory (Helen Mirren), the aloof chief proprietress of Le Saule Pleureur, a Michelin-starred, classical French restaurant that’s the most celebrated dining establishment in the village. While her initially chilly protests against the opening of Maison Mumbai’s opening right across the street from her esteemed eatery, her resistance towards the Kadam family quickly escalates into a heated battle. But Hassan’s passion and talent for cooking French cuisine, and his admiration for Madame Mallor’s sous chef, Marguerite (Charlotte Le Bon), brings the two diverse cultures together. Much to Papa’s initial dismay, Madame Mallory eventually recognizes her culinary rival’s talent as a chef, and becomes a mentor to Hassan, which helps bring their two distinct cultures and cooking styles closer together than anyone expected.

Knight’s sentimental and romanticized script of Morais’ celebrated 2010 novel about a family struggling to not only find acceptance within their new community, but also successfully achieve their goal of opening a restaurant, made the film adaptation emotionally uplifting. While the focal point of the plotline of ‘The Hundred-Foot Journey’ is seemingly driven by the Kadam family and Madame Mallory’s equal passion of food and cooking, the compelling and powerful meaning that truly infuses the screenwriter’s drama with dominance is the fact that people from all cultures can truly unite over a shared interest.

The owners of the two equally popular but extremely unique restaurants initially balk at the idea of friendly competition, as they refuse to acknowledge that the members of their community have diverse tastes and would enjoy the other eatery. But ‘The Hundred Foot Journey’ smartly delves into the idea that people can overcome their apprehensions and truly like and accept each other. The fact that Madame Mallory would so willing extend a chef position to Hassan, even though they originally disagreed over how to cook and run their business, powerfully reiterated the drama’s enthralling theme of accepting people for who they are, and not just judge them, based on where they’re from.

While Knight created a nostalgic, passionate adaptation of Morais’ book, the plot became extremely and unsatisfyingly predictable as Hassan began to garner success and fame as a chef. Dayal initially portrayed the motivated caretaker of his family, who used his talent at cooking as a way to guarantee they have a stable life. But the actor unfortunately made Hassam, who vowed to keep his family together after the death of their mother, appear disconnected from everyone he cares about when he first finds success. He no longer embraces the collaboration of working on new recipes or pleasing people with food as he starts to question the true meaning of being a chef.

While the charming and enthralling story about two competing restaurants whose owners are learning to accept their respectively distinct tastes becomes gaudy when Hassan and the other characters begin to become self-indulgent, the remarkable production design from David Gropman is impressive and expansive. The designer skillfully crafted two distinct looking restaurants for Maison Mumbai and Le Saule Pleureur. While the two buildings are right across the street from each other, Madame Molly’s establishment radiates elegance from its high-arcing windows to the polished and formal dining room tables. Maison Mumbai, meanwhile, tactfully exudes the feel of a courtyard gathering, with wooden picnic tables and chairs and a fire roasting pit that masterfully cooks the traditional and exotic Indian food the Kadams love.

‘The Hundred-Foot Journey’ is a powerful and emotional exploration into the lengths two competitors will go to discredit the other in order to keep their own pride, before realizing that continuously ridiculing someone simply because they have different tastes than you doesn’t help anyone. Knight’s passionate script adaptation of the novel gripplingly details the massive change both Madame Mallory and Papa realized they needed to make in order to truly capture what they want. While the encouraging story and impressive production design from Gropman perfectly reflect the spellbinding change in both restaurant owners, the predictable storyline and disappointingly brash change in Dayal’s performance took away the spark that would have made the drama truly great. 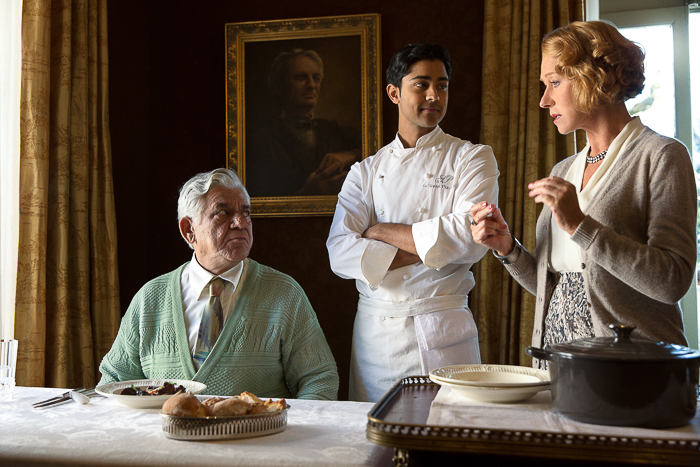