Are You Here Movie Review

“Are You Here” is a buddy movie not unlike those of the 1980s. This one finds a friendship between Steve Dallas (Owen Wilson), a TV weatherman and serial dater, and Ben Baker (Zach Galifianakis), a person judged emotionally unstable who is being helped through his long-term friendship with Dallas.

There are several flaws that can be pointed out:

The most serious one is thematic.  Ben does not conform to the general culture of the U.S. and is therefore considered bipolar because he is a vegetarian, he has a thick beard, and is obsessed about the ways that we are destroying the environment.  While most people of that bent might sit around a living room coffee table to discuss their attitudes, Ben makes his ethical views the center of his existence, regularly spouting his viewpoints.  Unless writer-director Matthew Weiner is satirizing mainstream views and glorifying Ben, which I doubt, he makes us think that if such a guy takes his meds, shaves his beard, begins eating chicken and moves on to beef, and tears down a store he inherited to put up a modern place of business instead of one emulated nineteenth century groceries, he is cured.  Normal.  Conformist.

Another is that we should expect a lot more of the director, whose helming of nine episodes and scripting of eighty-seven of TV’s “Mad Men”—evoking the character of the mysterious and talented executive Don Draper.  With “Are You Here,” the story is torpid, generating characters who go through their lines sleepily—telephoning them in, as the expression goes.

This is not to say that the movie lacks wit.  There are some sharp one-liners, though few if any that remain in mind hours after the film, but generally the comedy is limp, the drama lacking poignancy.

The story turns on an inheritance left by Ben’s father in his Amish-country Pennsylvania home.  The widow Angela (Laura Ramsey) is a hippie some decades younger than her departed husband, wearing a simple gown and without shoes.  Ben leaves nothing to her but the “stars in the sky.”  Instead, while the man’s daughter, Terry (Amy Poehler) gets a mere $250,000, Ben gets the farmhouse, the hundred-plus acres, and assets that total over two million dollars.  Though Steve is not mentioned in the will, Ben feels an obligation to him for helping to make Ben “normal.”

“Are You Here,” which had been called “You Are Here”—neither pertinent to the specifics of the plot—deals with soap-opera issues including the question we in the audience must have on whether the hippie-ish Angela will respond more affectionately to Steve, though she believes Steve is a superficial guy who depends on his charm as a substitute for genuinely interacting.  “You think I’m charming?” retorts Steve, in one of the movie’s solid one-liners.

Nor does Ben look better having taken a razor blade to his dense facial hair.  He seems to be giving up his identity in his new role as an ordinary fellow, and here again we wonder whether director Weiner wants us in the audience to catch his drift, which may or may not be that Ben is doing himself a favor.  For his part, Steve does not convince us of his own change, from a superficial skirt-chase to a man who is realizing that existence should be something more.

Chris Manley films the story in North Carolina to take the place of Lancaster, Pennsylvania and environs. 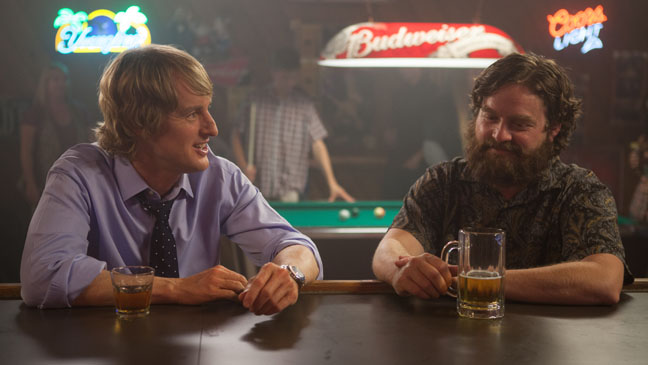