At the Devil’s Door Movie Review

Title: At the Devil’s Door

Less is sometimes more, and then sometimes less is merely less — atmospherics in the service of an elliptical story of posed dread, whose twisted, wire frame can’t hold the weight of a viewer’s long-form interest. Such is unfortunately the case with writer-director Nicholas McCarthy’s sophomore effort, “At the Devil’s Door,” an in many ways admirably restrained supernatural horror film about a variety of women grappling quite literally with demons.

The film opens with a young girl (Ashley Rickards) becoming quite troubled after playing an unsettling magic game with the uncle of her teenage make-out partner. Sometime later, real estate agent Leigh (Catalina Sandino Moreno) works to sell the house of a middle-aged couple, who can no longer afford their mortgage. When she’s visited by the spirit of the aforementioned girl, more bad things happen, and Leigh’s artist sister, Vera (Naya Rivera), sets out to try to find her. She too is met with problems. Vera wakes up in the hospital, where she’s told she’s been in a coma for eight months — and pregnant. She demands a C-section, and the film then jumps six years into the future. Vera visits the little girl she gave up for adoption, and tells her that she knows who she really is, and what she wants.

“At the Devil’s Door” is redolent in mood — Bridger Nielson’s cinematography and composer Ronen Landa’s low, pulsing score combine to achieve a couple nice moments — but everything within the shots is bathed in equally foreboding shadow, regardless of location. The film’s movements through time are inscrutable, as are many of its in-scene choices; McCarthy eschews lots of gore, but cuts back and forth between moments of posed faux-menace that have no bearing or relationship with one another. McCarthy makes a number of other fatal mistakes, too, starting with an opening (and closing) voiceover narration that underscores what the movie is about, removing any sense of ambiguity it might have.

Then there’s the simple matter of the movie’s dialogue and some of its interactions. When he’s not leaning too heavily on mood, which is for most of the film’s running time, McCarthy fails to craft recognizably human interactions that might help sustain his exercise in creepiness. Says Vera to the strange girl she thinks is a runaway, when she spots her looking at the photo on her keychain: “That’s my sister Vera. She’s a special person — kind of dark. I just want her to find someone special and have kids.” Ohhhh… wait, that’s foreshadowing, right?! 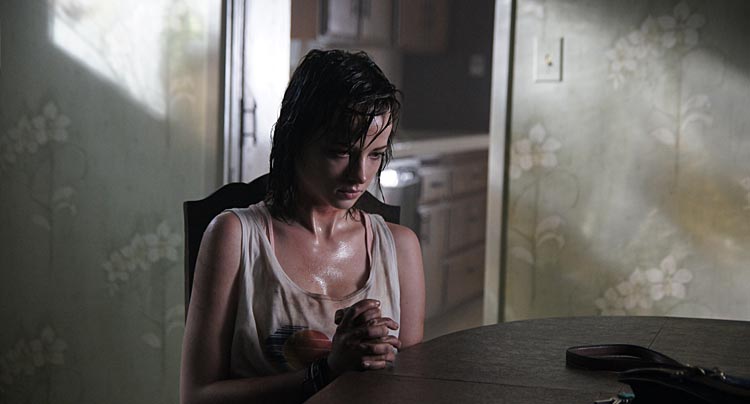